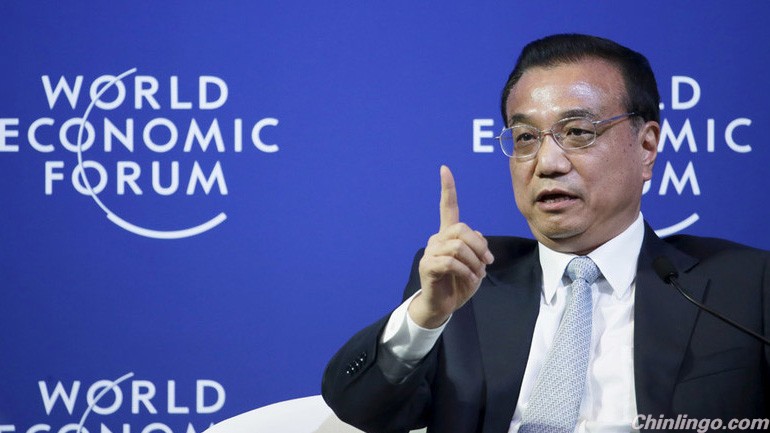 Chinese Premier Li Keqiang on Thursday sought to reassure global investors on the health of China's economy and his government's ability to manage a growth slowdown and financial market turmoil.

"China is not a source of risk but a source of growth for the world," Mr Li said in a speech to the World Economic Forum in Dalian. "Despite some moderation in speed, the performance of the Chinese economy is stable and it is moving in a positive direction."

Mr Li's soothing words come after a tumultuous summer for China marked by further evidence of a slowing economy, market volatility and a devaluation of the currency that unleashed a global stock market rout.李克强发表上述安抚性言论之前，中国经过了一个动荡的夏季，特点是经济出现了更多放缓迹象，市场出现了波动，货币出现了贬值——这些情况导致全球股市大幅下挫。

The government's response has been criticised by international observers who watched perplexed as the authorities sought to prop up stocks by banning large share sales, detaining journalists and punishing "rumour mongers" as well as orchestrating state-directed buying.

The decision to devalue the renminbi and move to a new "market-based" exchange rate mechanism on August 11 set off a wave of global volatility, especially after Beijing appeared to reverse course soon after and began heavily intervening in currency markets to avoid a much sharper devaluation.

In a meeting with global business leaders at the forum, Mr Li dismissed the suggestion that China had been the trigger for instability in global markets over the summer.

"Relevant Chinese authorities took steps to stabilise the market to prevent any spread of risks. Now we can say we have successfully forestalled potential systemic financial risks?.?.?.?what we did is common international practice and is in keeping with China's national conditions."

"Quantitative easing on its own can't address structural obstacles to growth and this policy alone might have negative spillover consequences," he said.

Despite the ongoing slowdown in domestic growth, Mr Li said China contributed 30 per cent of global growth in the first half of the year and he insisted China would still grow by the government's target of "around 7 per cent" this year.

He did acknowledge serious global concerns over the Chinese economy, where he said "deep-seated problems built up over the years are now appearing".

But he insisted Beijing is committed to the "painful and treacherous" process of transforming its economic model from one that is over-reliant on investment and manufacturing to one that is driven more by consumption and services.

He said this transition was already well under way and even if China was to slow much further the government has the ability to stimulate growth to meet its annual growth targets.

"China is not heading for a hard landing," he said. "China will never resort to a currency war," he added, in a nod to global worries over the recent devaluation.

Although he did not outline any new stimulus measures or policy reform initiatives, Mr Li did say he was confident in future growth because he saw a "massive wave of mass entrepreneurship and innovation across the nation".