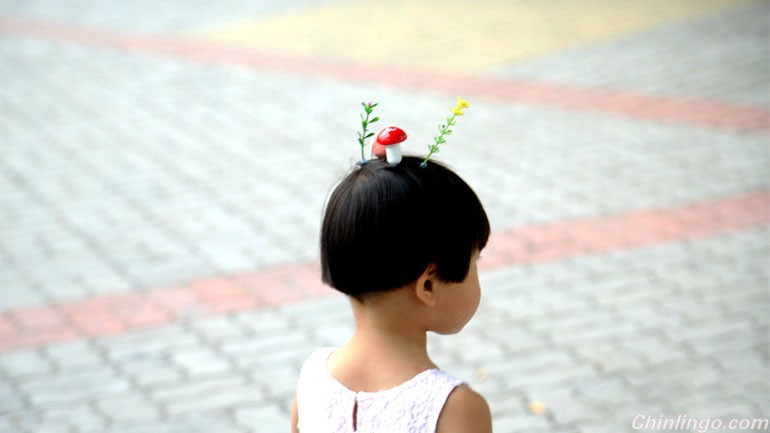 When it comes to fashion, just about anything goes. Citizens in Chengdu, the capital of south west China's Sichuan province have been spotted sporting quirky antenna hairpins.

Around 100 different designs are available for the unusual hair accessories, which have been worn by the young and old, reported People's Daily Online. Many of the hairpins are different varieties of plastic flowers. From afar, it looks like a plant has germinated from the top of a person's head. Upon closer inspection, it looks more like an antenna.

According to reports, the antenna hairpins have appeared all over Chengdu recently. Initially they were restricted to touristy areas but have since spread to other parts of the city.

Many people are wearing them because they thought the hairpins made them look cute, and it's not just restricted to women or children. One man has told reporters: 'I saw them and thought they were interesting so I bought one. People look cute when wearing it.'

His views are not shared by everyone however. Another man thought the hair pieces were silly. He said: 'There are middle-aged men wearing the hairpins. They just look ridiculous.'

People have also taken to the web to discuss this bizarre new trend. One said: 'Everyone is wearing it in Kuan Zhai Alley. I saw someone wearing it on the underground today. It feels like they might be able to transmit WI-FI signals.'

But street vendors are glad of the trend. They are sold for 5 yuan by vendors but can be found online for as little as 0.3 yuan. As a vendor can sell over a hundred of the hairpins each day, they stand to make hundreds of yuan.