武则天, the first and only female Emperor in China 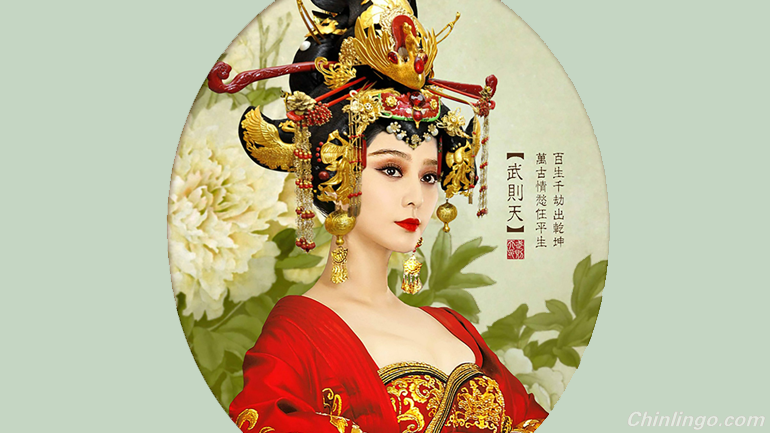 Not long ago there was a soap opera on tv which was really popular called the Legend of Wumei. It was the story of the only Chinese empress in Chinese history, Wu Zetian.

Wu Zetian lived in the Tang Dynasty over 1300 years ago. Wumeiniang was one of the names by which she was known. When she was forty, because she was extremely beautiful, she was chosen to enter the imperial palace to become one of the many wives of the emperor Li Shimin and she was given the rank of lady in waiting, a position quite low amongst those of the emperor's wives.

After Li Shimin's death, his ninth son, Li Zhi, succeeded to the throne. Wu Zetian was loved by Li Zhi so she became one of his wives and received the title of zhaoyi. Later she used a trick to have the titles of all the imperial consorts and of another imperial concubine abolished and she herself assumed the position of empress.

Li Zhi was a person with a comparatively weak character so Wu Zetian helped him deal with and decide state affairs. Slowly she gained more and more political power. When Li Zhi fell ill, Wu Zetian took his place in dealing with state affairs. After the death of her husband Li Zhi, Wu Zetian arranged for her own and Li Zhi's children, Li Xian and Li Dan to consecutively become emperor and she herself was the emperor's mother but in fact she had the real power. Later she simply abolished her son's title of emperor and became empress herself.

Wu Zetian was empress for fifteen years. Being a woman, the matter of Wu Zetian being empress received much opposition from people at the time. Because she received so much pressure she had to return the title of emperor to her son Li Xian.

During the reign of Wu Zetian, the Chinese system of imperial examinations was expanded and many efficacious improvements were made to Chinese education and to the system of selection of those with talent. She was also particularly good at selecting and using those with talent to help her govern the country. During the fifteen years of her reign Chinese culture and the economy both developed. It is worth noting that at that time, the position of women was higher than at other times in the past. But Wu Zetian had to put up with much negative criticism, some people saying she was ruthless and for the sake of power, when she became empress she killed many people. But if not for her cruel and merciless character, perhaps this legendary empress would never have appeared in Chinese history.

0 responses on "武则天, the first and only female Emperor in China"