Except food, there is more in Chengdu, China

There were actually a few dishes I wanted to taste beyond mapo doufu, the Sichuan classic of silken tofu and ground beef glazed with a slick of crimson-red chili oil and a dusting of toasted Sichuan peppercorns, but we managed to track down nearly every one of them. Luckily, Sichuan Province, with its mountainous terrain and cool, misty air, is a much easier place to go exploring as a pedestrian than the grimy hustle and bustle of Beijing or Xi'an. Chengdu—a city over 20 million-strong that still feels in many ways like a small town—was one of the highlights of our time in China. Not only is it one of the best food cities in the world, it's also the only city we visited in China where drivers actually wait for pedestrians to cross the road, and where public restrooms regularly provide running water.

Sichuan Province and neighboring Chongqing (they split in the '90s) are home to some of my favorite foods of all time; Foods that I've eaten countless times in Sichuan restaurants stateside, foods that I've made at home over and over again to perfect them, foods I've read about in every book on Sichuan cuisine I could find, but also foods I'd never ever tasted in their home territory. We tracked down an unparalleled version of fuqi feipian: shavings of braised and chilled beef tongue or heart, along with thin slices of tendon and tripe, paper-thin and crunchy in texture. The slices were tossed with a chili vinaigrette and served with roasted peanuts and chopped cilantro. 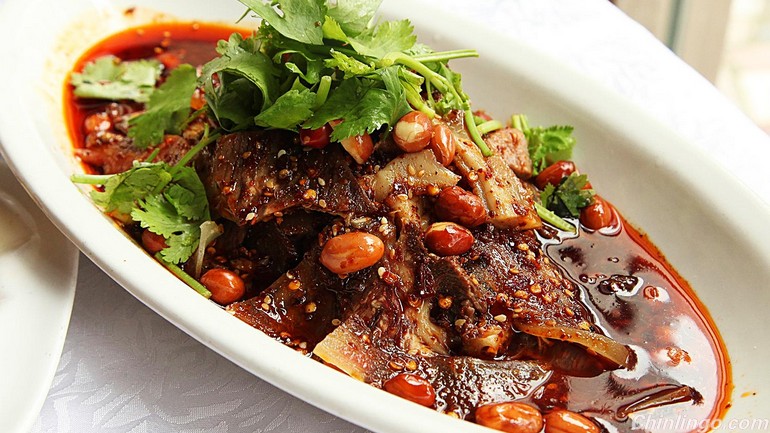 We walked down the street towards the very pleasant Renmin Park and stopped at the first shop that struck our fancy. They were serving steam-griddled bing(think: English muffins meet a Chinese steamed bun) stuffed with your choice of 40 or so different menu items. Adri and I followed our standard trick and pointed at what the person in front of us got and were met with a bun stuffed with a meltingly-soft, chili-packed stew of pork and potatoes. 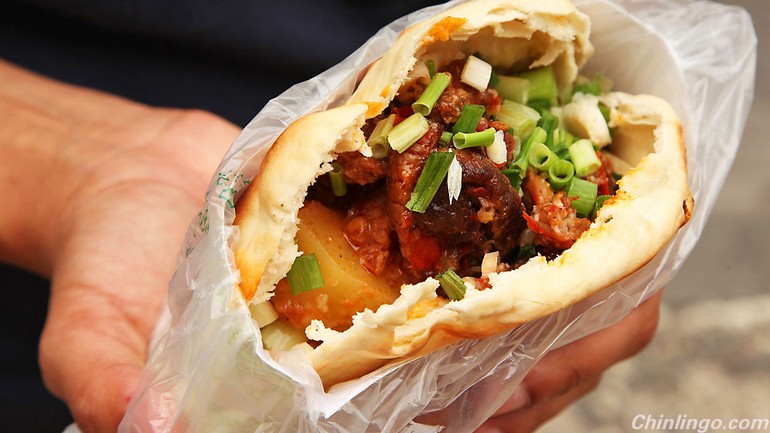 We strolled through the winding, tourist-packed Jinli walking street where we ate cups full of spiced fried potatoes, bean starch jelly flavored with chili and vinegar, and grilled skewered meats. In any restaurant in the U.S., all three would have been showstoppers, but I feel like you have the right to raise your standards when you're in the motherland. We saved space and instead sat down at a small bar. We ordered two large Yanjings and were mildly amused to find that nearly every other patron was drinking Budweiser, and at a very hefty price tag to boot. The locals were probably equally amused to see us drinking their national piss-water when that glorious Bud was only a few dozen Yuan more. 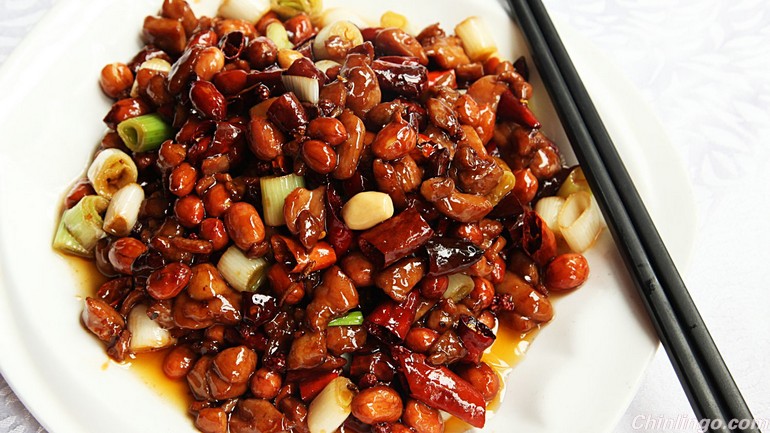 There's gongbao jiding, or kung pao chicken, which, in its original incarnation, is far more subtle and sweet than either the gloppy bell pepper and celery-studded lunch specials I grew up on or the fiery and funky hardcore version I've been making for myself for years. I may well have to add a third recipe to my arsenal now that I know what it's supposed to taste like. 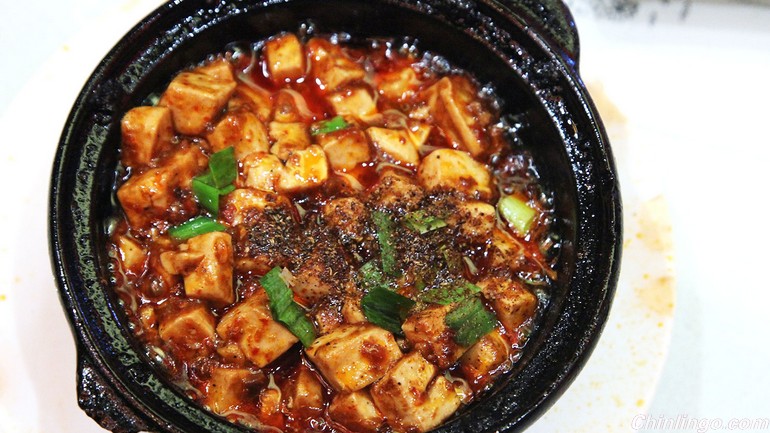 And of course we hit Chen, the restaurant that was built on the fame of Grandma Chen herself, the eponymous pockmarked lady who supposedly created Mapo Doufu. You can find the dish at nearly every restaurant in China (and, in fact, at nearly every Chinese restaurant I've ever been to in my life), but nowhere have I had it as good as here. It comes to the table in a hot cast iron pot, the cubes of tender tofu quivering in the bubbling chili oil, the aromas of roasted chilies, fermented horsebeans, Sichuan peppercorns, and garlic rising through the plumes of steam. It doesn't have the blast of chili heat you might expect from looking at it. Rather, it has a more subtle, layered burn with chilies that come through alternately as sweet and hot with the rich, almost raisin-like flavor of dried fruit.

We ate nearly non-stop and we ate well, but there's more to see and do in Chengdu than just eat (really!). (Check out my article on the 14 Essential Dishes of Chengdu and Chongqing for more details on the food.)

There's not an awful lot by way of touristy sites compared to, say, Beijing, but it has quite a few really lovely public parks. Once inside, you can participate in such varied activities as singing with old folks, practicing ballroom dance with old folks, drinking tea with old folks, or—my favorite—getting your ears cleaned by young men. 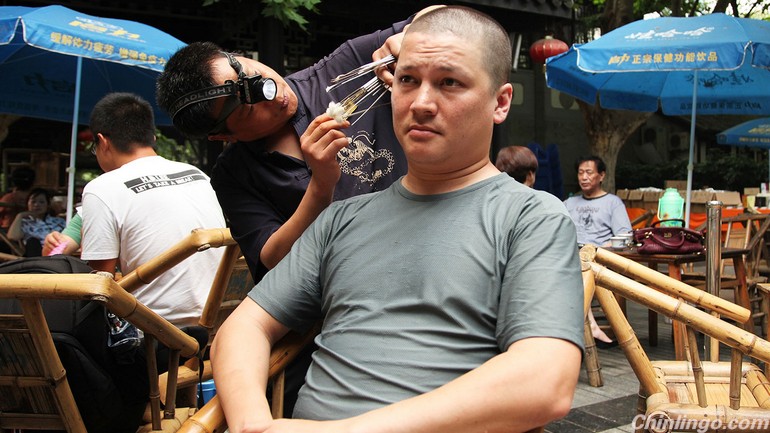 You do not want to know what this fellow found while spelunking my inner canals. Suffice it to say, I figured out why my hearing seemed to bad lately.

So yeah, the city itself is great, but if you want to experience the real cool stuff in Sichuan, you'd do best to get out of it, and your first stop should be the pandas. China ain't exactly well-known as a beacon of animal rights, but the Chengdu Research Base of Giant Panda Breeding is by all means one of the most well-run animal research and conservation organizations I've ever visited. The habitats are natural, the pandas are generally kept well away from the visitors (though in typical Chinese fashion, those with lots of RMB to spare can pay an exorbitant fee to join a caretaker in feeding the baby pandas up close and personal), and the place is extraordinarily clean and efficient. 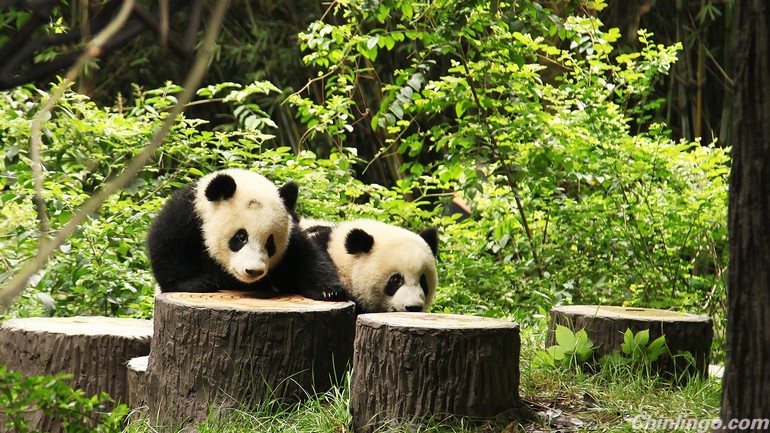 There are a number of peafowl that roam the grounds as well. Chinese children seemed strangely afraid of them. We spotted this guy taking his little peachick out for a walk: 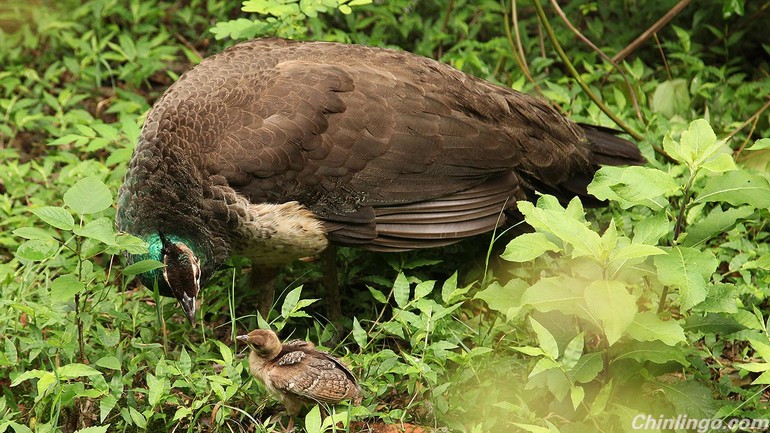 Joke's on me, because it turns out that after some debate, scientists decided that pandas in fact are bears. Next they're going to tell us that margarine is unhealthy or that fat-free cookies can still make you fat. 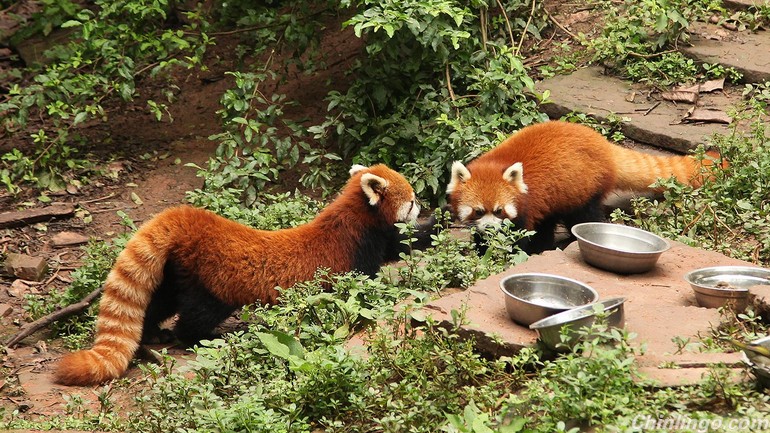 Red pandas are cute and all, but not nearly as cute as giant pandas. I mean, just look at this guy:

0 responses on "Except food, there is more in Chengdu, China"