Dare you try some creepy crawlies in China?

The Wangfujing food market is the daytime equivalent of the nighttime Dong Hua food market which I mentioned the other day, and it's packed with just as many tourists, though during the day, most of the tourists seem to be Chinese, not Australian.

It's a good street to stroll down if you want to view a bunch of creepy-crawlies stuck on sticks (like live scorpions, with their barbs still flailing and pincers still pinching), though again, not the best place to go if you actually want the best food to eat. Almost all of it is a half-assed version of things you can find better elsewhere in the city, and at more reasonable prices. 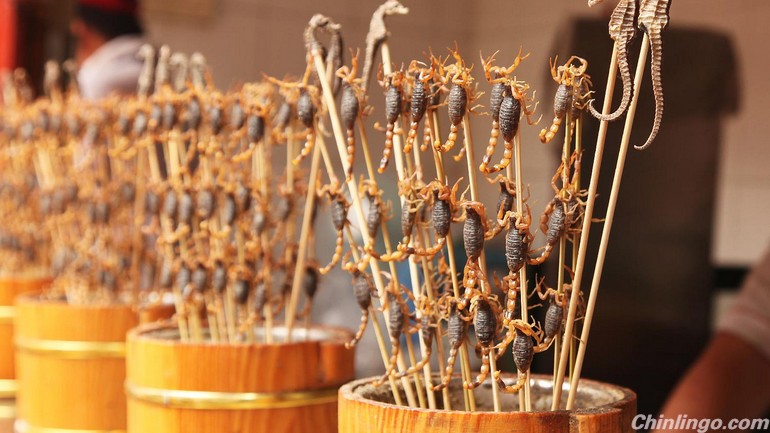 Walk past the scorpion vendors and the men behind the counter will slam their hands down, sending the live scorpions into flurries of movement. Not sure how I feel about live animals on sticks being used as entertainment. Luckily the seahorses are already dead and dried. You can get anything grilled or deep-fried, along with giant spiders, silkworm chrysalises, and even larger scorpions.

Adri and I tasted our way up and down the stalls and while fun, nothing blew us away with flavor. Like I said, it's kind of a tourist trap. Here's some of what we had: 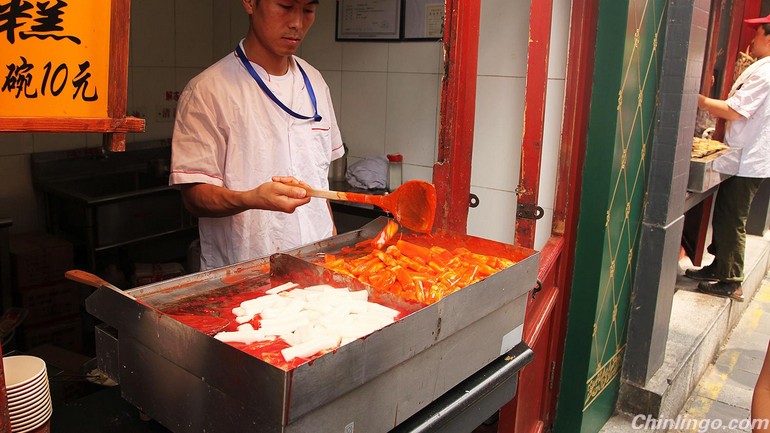 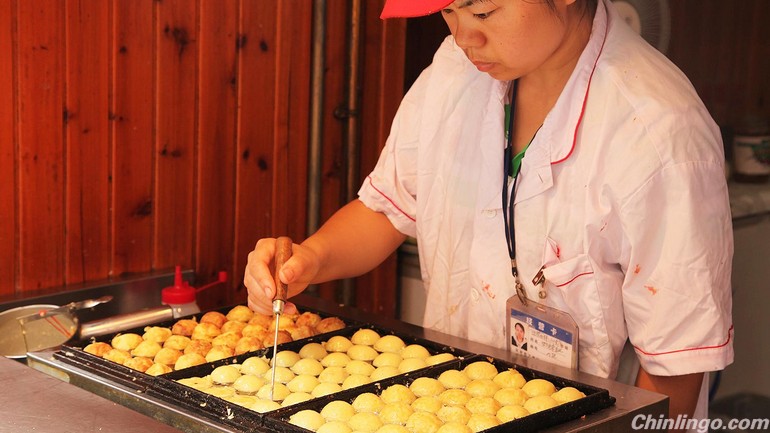 Japanese tako-yaki—octopus-filled spherical cakes that seem to be getting popular all over China in a rare example of reverse culture flow (many popular Japanese dishes—ramen and gyoza, for instance—are heavily influenced by Chinese cuisine, not so much the other way around) 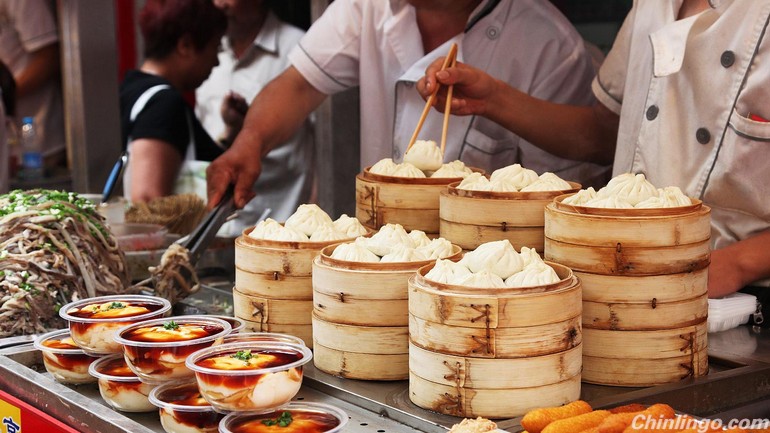 Steamed, pork-filled bao, along with bowls of tofu with chili oil and vinegar. I'm pretty sure those are standard-issue corn dogs on the table as well, though we didn't try them (word to the wise: hot dogs are not worth trying in China). 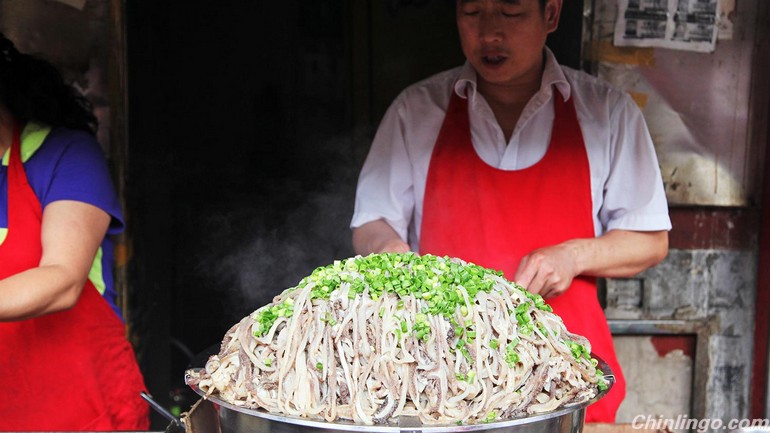 Looks like noodles, smells like shit, quite literally. Those are strips of thinly sliced tripe. They're served with black vinegar, chili, and scallions, and depending on the vendor can range from mildly odorous to outright gag-inducing. I'm generally an avid tripe-eater, but no amount of chili oil or vinegar could get me to stomach this stuff. At least not with a decent Western toilet within butt-clenched running distance. 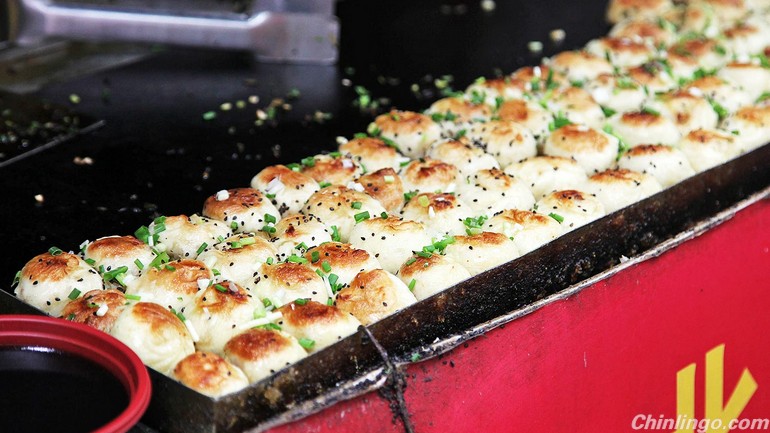 Sheng jian bao—pork filled leavened buns that are crisped up on a griddle with black sesame seeds and scallions. They're served with vinegar for dipping and at this particular location, about as good as you'll find in New York's Chinatown. I'm waiting to get to Shanghai for the real deal. 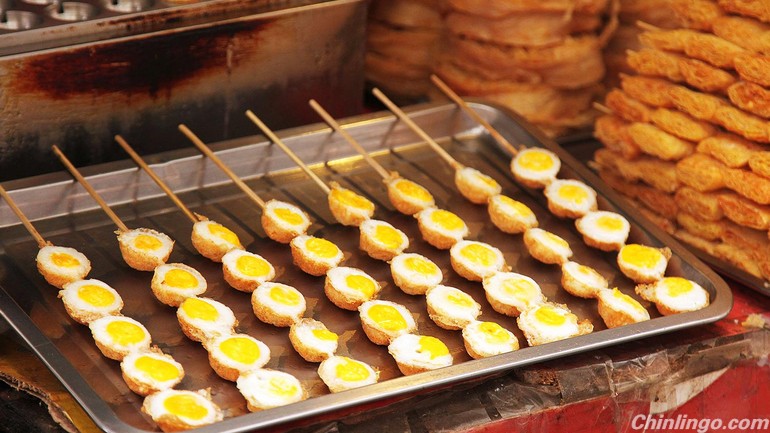 Quail eggs cooked in what looks like a mini aebelskiver pan until crisp on the bottom, then shoved onto a stick. Actually quite tasty, but, as I soon found out, nothing compared to version you can get where we were headed tonight on an overnight sleeper train: Xi'an. But more on that later…

0 responses on "Dare you try some creepy crawlies in China?"