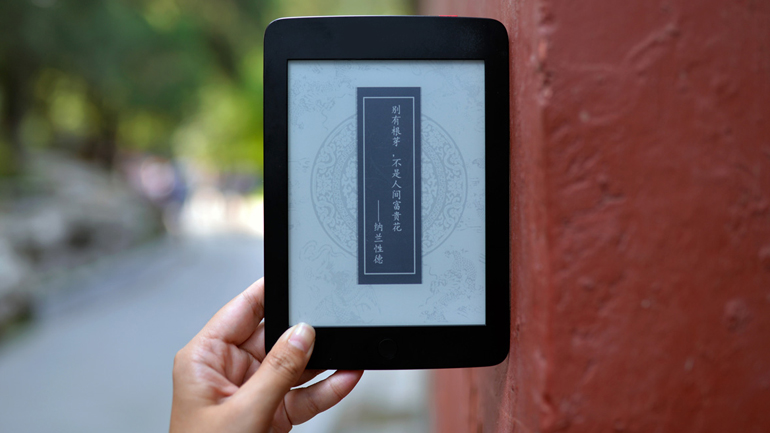 I currently teach at an overseas Chinese study program for American undergraduates. One of the most common laments I hear from my students goes something like this: "I can fairly easily understand the material in my intermediate Chinese reader, but whenever I try to read an actual newspaper or magazine article, I can barely get through the first paragraph. And novels are almost impossible. When am I going to be able to actually read texts in the real world?"

The solution to my students' problem is to go digital — that is, read your texts in e-format, whenever possible. The Chinese may have invented Chinese characters and paper, but it's time to separate the two. Don't get me wrong; I have a deep nostalgic love for ink on paper, but who has a leisurely hour to devote to one lousy page of text? There's an amazing arsenal of new Chinese character processing technology out there, and it's time we made full use it. The plethora of smart phone apps, web browser extensions, digital dictionaries and Chinese character processing devices that students are now using – or should be using – every day have totally revolutionized the previously Sisyphean task of reading in Chinese. By abandoning paper, the new digital technology finally makes it possible for the student to jump into the ocean of Chinese characters without the risk of drowning.

Apps such as Pleco or KTdict feature "document reader" or "web page reader" features that allow you to copy and paste entire articles or books into a window, create a TXT file, and read the text using the pop-up window definition features of these programs. If you include features like Chrome's automatic translation tool, plus built-in tools like Google Translate, and there's a hardly any page of modern Mandarin out there that can't be successfully decoded by a diligent intermediate student. For the intermediate student with three or four semesters of Chinese under their belt, there is now no reason not to escape the confines of the textbook and start navigating a wide range of real-world texts. The only question is where to find such texts.

Any text that is digitized can be a learning text

Unfortunately, the world of Chinese pedagogy has not quite caught up to the potential of the new technology, and so in some cases you will need a little creative Googling to find the materials you need. The good news is that any text that is in electronic form or on a web page can be converted to a format that is readable in one or another of the digital dictionary tools available. Thanks to the burgeoning array of Internet sites and digital resources you can begin exploring – relatively painlessly – new textual territories that accord perfectly with your literary tastes, your research, your hobbies, and even your passions.

For those interested in Chinese literature, with a little clever searching you can find sites with online-accessible works such as Dream of the Red Chamber and Journey to the West are out there somewhere (see for example, Chun wenxue wang 纯文学网站), and works by modern authors such as Mo Yan, Han Han and Yu Hua can be found with a little digging (see http://www.kanunu8.com). By cutting and pasting the texts into your Chinese app, students can finally begin reading such authors with relative ease.

If you want to try delving digitally into Daoism or the rest of the classical philosophy tradition, there are sites such as The Chinese Text Project. And there are an increasing number of sites that provide a wide range of public domain texts from all different areas, chosen with the Chinese learner in mind, such as "Chinese Text Sampler," which can be found at this user-friendly University of Michigan website: http://www-personal.umich.edu/~dporter/sampler/sampler.html.

For current events, there are helpful news sites in both English and Chinese bilingual format, such as the New York Times' new Chinese site: http://cn.nytimes.com/

By comparing the Chinese with the English, and by checking unfamiliar characters in the pop-up definition windows, a student at almost any level can read a newspaper article with nearly 100% comprehension.

At the outset, your primary goal for reading is to improve your speaking

Why is it so important that you begin to read more extensively? Adult learners of a foreign language don't have the luxury of learning to speak the way babies do. To a great extent, we must absorb a foreign language via written texts. The linguist Ferdinand Saussure tells us that written language is merely the external representation of speech; the spoken language is the basis of the written language. Thus, for a student of a foreign language, who usually doesn't have as much verbal linguistic input as a baby has, reading is a way of getting familiar with the nuts and bolts of the language, a shortcut to developing an intuitive "feeling for the language" (in Chinese, yǔgǎn 语感). And this path is what has, up to now, been very difficult for Chinese learners.

Contrast Chinese with an "easy" language like French, where the skills of speaking and reading meld seamlessly into and strengthen one another, thanks to the phonetic nature of the script. Even lower-level French students are quickly able to read and process a vast amount of real-world texts, using the written language as a vehicle to gradually acquire mastery of the grammar and syntax.

This is no longer the case. Chinese is becoming more and more almost like a "normal language" from the point of view of reading. This means that learners of Chinese can now start using Chinese texts to directly bolster their speaking ability. With this in mind, it is a good idea to choose reading material that is essentially a record of natural speech, such as movie and TV scripts, transcripts of actual interviews, talk shows, lectures, and even posts on social media platforms like Weibo and Weixin.

The digital revolution is not a dinner party

The approach I'm advocating here is clearly not for everyone. It still takes a student with a certain degree of dedication to get over the technological hump and create this kind of digitized reading environment. But for those willing to make the effort, the result is a new access to entire semantic worlds that were virtually inaccessible to previous generations of Chinese learners.

There are still a surprising number of struggling Chinese learners who have not seen the wisdom of this paperless path. But if you are already doing the bulk of your Chinese reading with digital tools, know that you are on the vanguard of a digital revolution that will eventually free all our Chinese-learning comrades from the tyranny of printed books, those mute and unhelpful "paper tigers" who have preyed on our precious hours and energies for far too long.

0 responses on "Time to read Chinese in digital age"