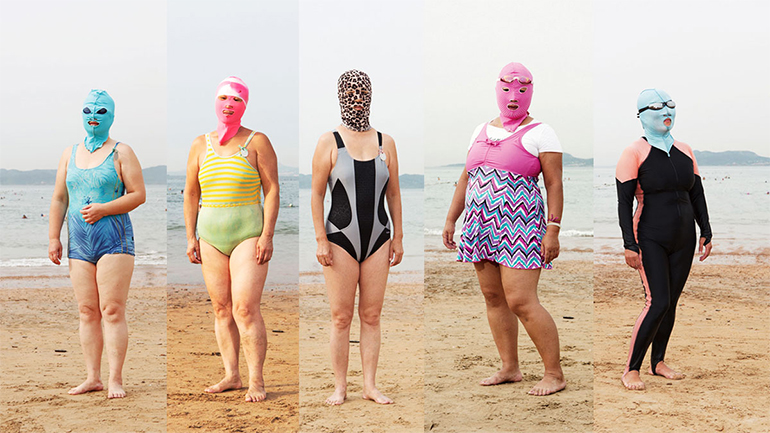 It may never rival porcelain or Peking duck in popularity beyond China's shores, but the "facekini" is being hailed by domestic newspapers as the country's latest cultural gift to the world.

The recent publication by a New York-based style magazine, CR Fashion Book, of aphoto shoot showing models wearing "pool masks" has prompted the Qingdao Evening News to claim the look as a foreign variation on a familiar theme in the north eastern seaside city.

"As soon as this photo shoot was published, the sharp-eyed among our netizens immediately recognised that this was none other than a ‘knock off’ of our Qingdao old woman's 'facekini'," the newspaper said.

The upgrading of this "matronly style" (see left) to the heights of New York fashion has stirred a whirlwind of comment on Chinese social media, with around 12m posts on Sina weibo, China's version of twitter, so far.

Although the facekini owes its popularity to the protection it offers from the sun in a culture that prizes white skin, its origins may be more pragmatic.

Zhang Shifan, a 58 year-old Qingdao local identified by the Qingdao Television website as the facekini's inventor, says that the headgear was first intended as protection against the nipping of sea crabs, which lurk offshore in large numbers.

"Ms Zhang said that in 2006 she had the facekini idea, though it wasn't called that then, going by the more general name of 'face mask'," the Qingdao Television website said. "It was designed as a protection against sea crabs…as an underwater hat."

These days the masks are a common sight on Qingdao's popular beaches. "I went on down to the swimming area and although there were so many swimmers, I could very easily identify matrons wearing the facekini," the Qingdao Evening News journalist wrote. "They show only their eyes, with their nose and mouth covered just like a covered superman."

Others on Weibo thought that headgear made it look as if the beaches are being invaded by bank robbers.

0 responses on "Facekini: China's latest cultural gift to the world"