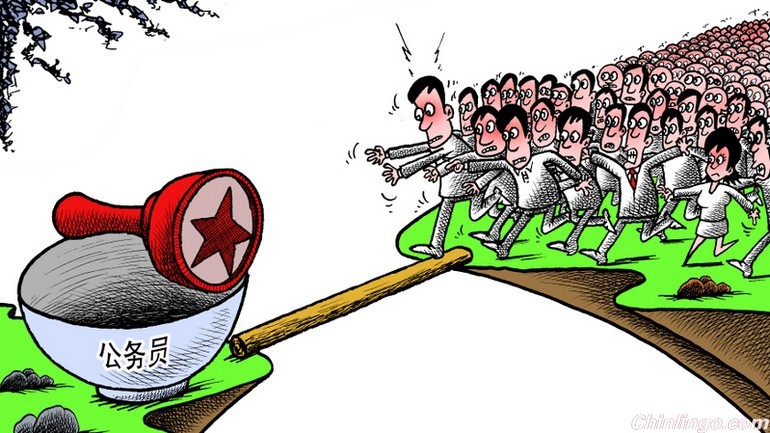 GOVERNMENT jobs have long been prized in China. Most years new records are set for the number of people sitting civil-service exams.

Such a career has offered security and perks aplenty. The only drawback has been pitifully low wages. This month officials are to get their first pay rises in nearly a decade; even so, many are heading for the door. Students are showing signs of losing interest in the career.

The reason is campaign against corruption, the most intense and sustained in the party’s history. It has made it harder to trouser the bribes that have traditionally supplemented those meagre official salaries. Many civil servants now fear a knock on the door by agents of the party’s anti-corruption department. In 2014 it punished 232,000 officials, 30% more than in the previous year. That was still only about 3% of officialdom, but the publicity surrounding these cases has compounded anxieties. Many officials are being taken, with their spouses, to learn a lesson by visiting their former colleagues in prison.

A Chinese job-search website, Zhaopin.com, reported that in the three weeks after the lunar new-year holiday in February more than 10,000 government workers quit their jobs to seek greener pastures, mainly in the finance, property and technology industries—an increase of nearly one-third over the same period in 2014. The company attributed this to a new emphasis on frugality in government work.

Lavish meals are now banned (much to the chagrin of restaurants, which have suffered falls in profits). Governments are no longer allowed to build fancy offices for themselves. Stricter controls have been imposed on the size of ministers’ offices and temperature settings in government buildings. The receiving of gifts and donations of cash, once common features of bureaucratic life, has become far riskier. Earlier this year an investigation revealed the diversion by the Shaanxi provincial government of 89m yuan ($14.4m) in disaster relief funds toward the construction of new homes for civil servants. Officials do receive housing benefits, but not enough to cover the kind of well-appointed accommodation to which they aspire.

Li Zhong, a spokesman for China’s human-resources ministry, said in April that the report of an exodus was “unfounded”. He acknowledged that some government workers were looking for work elsewhere, but he said this reflected a “normal flow of talent in the job market”. But other numbers also suggest waning enthusiasm for a life of shuffling official papers. For the most recent annual exam for the national civil service, held on November 30th, there were 1.4m applicants, 110,000 fewer than the previous year. Of those, more than one-third failed to show up. There were 40 test-takers for each available position, the lowest ratio in nine years. As recently as 2010 it stood at 59:1. Recent opinion polls have found respondents born in the 1990s to be much less keen on civil-service careers than their elders.

In January the central government announced that the monthly salaries of civil servants would be increased by an average of 300 yuan—the first rise since 2006, starting at the end of June and with further rises every one or two years. State media trumpeted the increase as a hugely welcome and long overdue improvement for civil servants. But it will do little to boost the appeal of a civil-service job. The modest increases are on a base of monthly salaries below 1,000 yuan for the lowest-level village officials and 7,000 yuan for those at ministerial level. As one government adviser pointed out last year during a legislative session, this leaves the earnings of most government officials on a par with those of migrant workers. Offsetting the pay increases is a decision to end civil servants’ exemption from contributing towards their pensions.

Some online commentators are far from sympathetic. Officials’ salaries may be low, they note, but they are boosted by bonuses and subsidies.

Such scepticism would make it hard for the government to copy the example of Singapore, whose bureaucracy the party admires, by offering high salaries that both attract talented people into the civil service and spare them the need to seek illicit income.