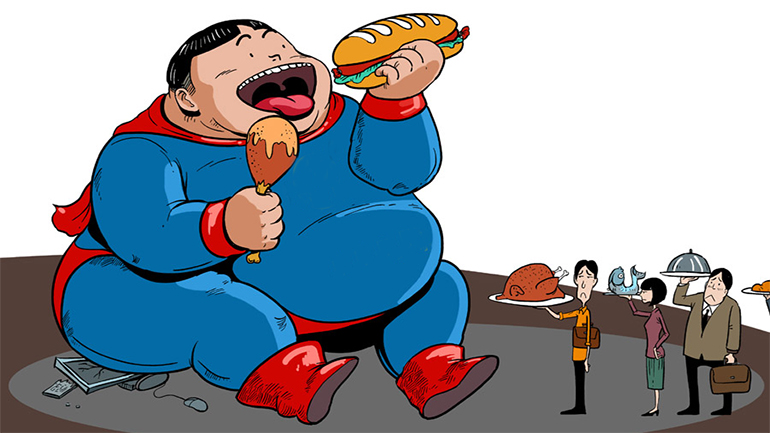 When flying to the US for our summer holiday each year, my family has a foolproof method of locating our check-in queue at Shanghai's Pudong airport: look for the passengers with the greatest girth. The largest people fly to America.

But according to last week's Chinese newspapers, we may soon have to find a new strategy (something radical like looking for our flight number on the departures board). Xinhua, the state news agency, reported that China now has a higher percentage of overweight and obese people than the west.

Even more interestingly, Xinhua further asserted that the reason that China has supposedly overtaken the US as the world’s obesity superpower is not the one most of us would imagine. Relax KFC: apparently it’s not your fault for once.

It's more likely to be hotpot that's making the country fat. Even vegetables, it seems, make Chinese people plump these days: growing affluence means people can add more oil to their meals, and that's the real culprit.

Xinhua based its story on a study by the National Health and Family Planning Commission, which found that 30 per cent of the country's adults were overweight in 2012 — and that the rate had swollen by almost a third since a decade earlier. Nearly 10 per cent of children aged six to 17 were overweight, double the rate in 2002, the report said. No definitions, or comparative statistics for other countries, were given.

But even if China hasn’t yet trounced the world on this measure, it will do soon. The most recently published international study of the issue had China already at number two behind the US, and rising rapidly.

One 2011 study found that Chinese youths who ate more vegetables and less fast food, and came from richer households, were fatter than those who didn’t. “Overweight-related correlates seem to play different roles in the Chinese culture than in western cultures,” the study’s authors conclude. Translation: fat is cultural; and fat fads are even more so.

For example, it’s obvious that the Chinese middle class can afford to eat more steak these days; what’s not so obvious is why they think it’s such a good idea. Yu Peidi is one of this new generation of gung-ho meat-eaters — and like many of his compatriots, he believes it’s actually the healthier option. We had lunch with Yu, nicknamed Little Fish, on his 30th birthday. “I think beef is good, it’s high in protein . . . if it’s fattening, it has much more nutritional value than pork,” he said. Was he aware that many westerners think beef is bad for the heart, I asked. He was astounded. Did he know lots of non-Chinese think shrimp is bad for cholesterol? He hadn’t heard that one either.

I’ve got no idea which of us is right: the point is that our two cultures’ beliefs about food are so different. I think Chinese food is, on balance, healthier than western food; and he, on balance, thinks the opposite. My Chinese colleague piped up to say she forces herself to eat an avocado a day to lose weight; I mentioned I hadn’t touched one in decades, for exactly the same reason. Veins and arteries must be cultural too.

Luckily we all agree we should go to the gym more often (or, in Little Fish’s case, at all). His parents rode bikes and walked everywhere so they didn't need to work out; but his generation of middle-class professionals knows they have no choice. Health clubs are booming in every Chinese city, and Little Fish plans to join up soon. There's doubtless one opening in that shopping mall near him — right next to all the new steak restaurants.