Xiao Long Bao are only half the story of soup dumplings in Shanghai! – part 2

Another Shanghai institution, Yang's Fry-Dumpling
has the same business-first attitude that Jia Jia has, the difference
being that at Yang's, you can't even sit until you've picked up your
food, and seats are not always available. We ate our fried pork
dumplings standing outside, leaning over a garbage can to catch the
juices that dripped down our chins. 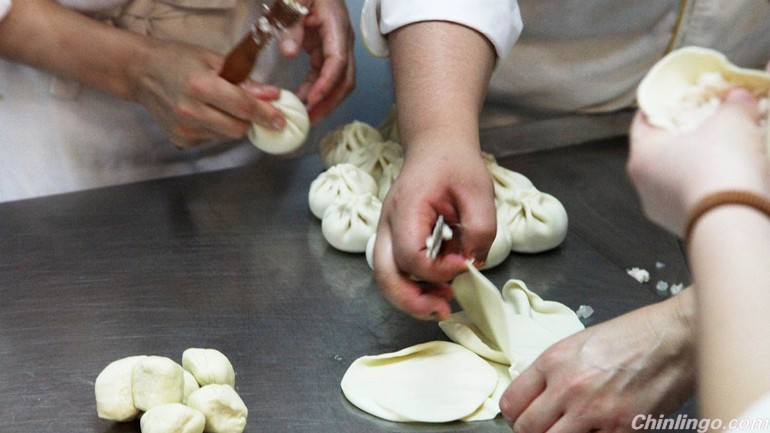 As at Jia Jia, you can watch the dumpling team at work as they stuff the buns.
Right away, you notice a major difference between the two. While XLB
dough is rolled out super-thin on a floured surface, SJB dough is rolled
thicker, and it's rolled with oil rather than flour, much in the same
way that Rou Jia Bing and other semi-leavened steamed bread doughs are. 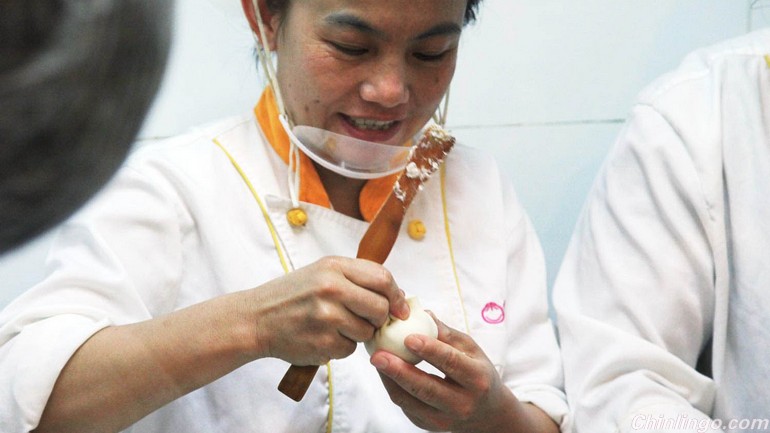 That said, the cooks are equally adept at stuffing and shaping the
little dumplings, though the cooks at Yang's have an advantage: these
buns are at least three times larger than a standard XLB. 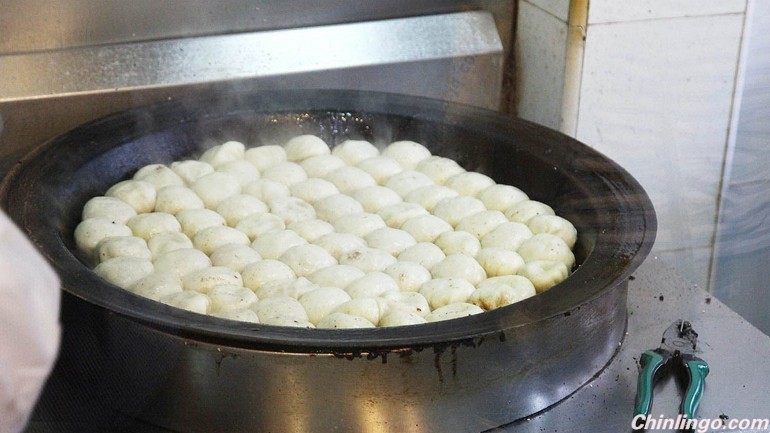 Once formed, the dumplings go nipple-side-down into a large cast iron
pan where they fry for a few brief moments before the cook dumps hot
water over them. 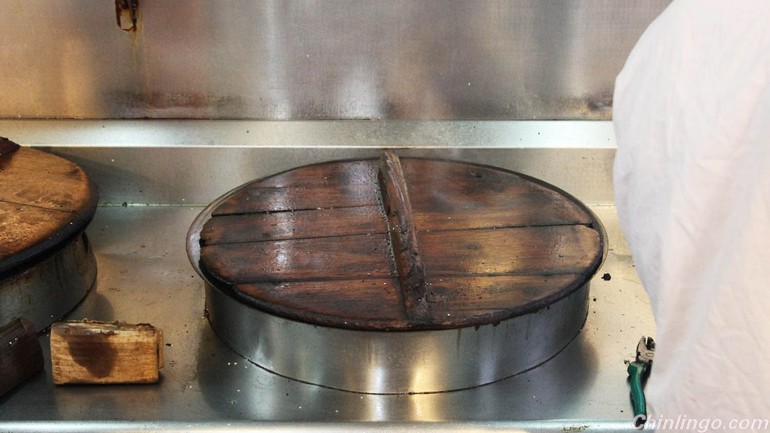 The pans are covered to allow the dumplings to steam through. 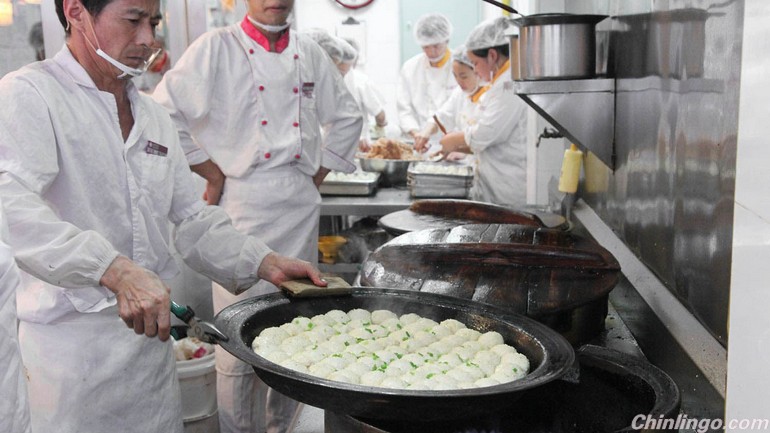 The dumplings cooks at Yang's work conveyer belt-style, shifting the
pans along from one burner to the next as they go through each phase of
the cooking process. 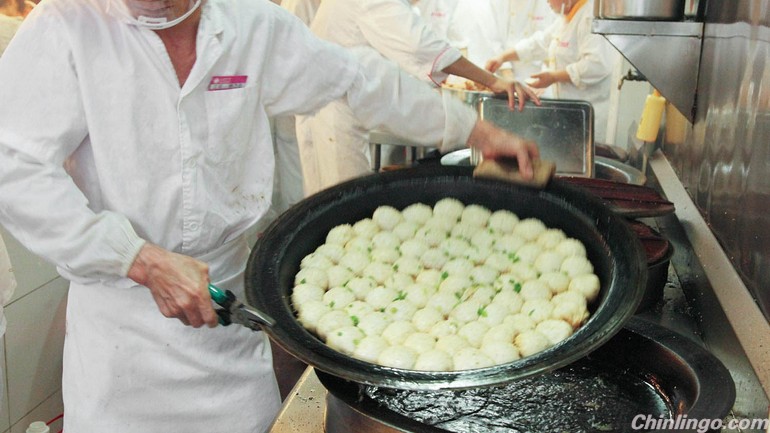 Eventually, as the water steams away, the dumplings begin to sizzle again as their bottoms brown. 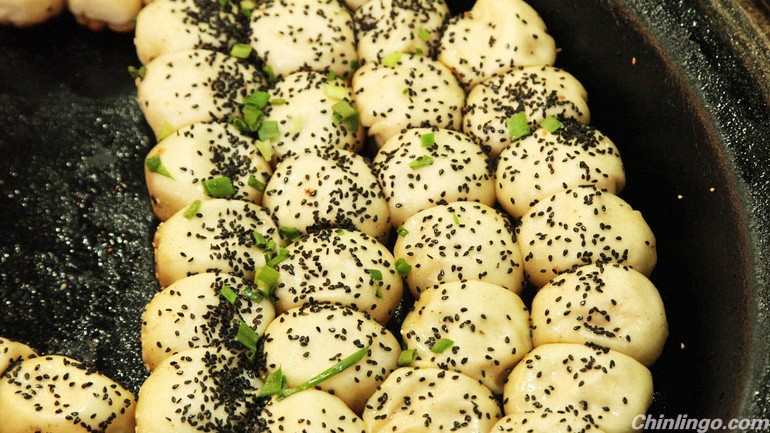 By the time they reach the front window, they're ready for a sprinkle of
black sesame seeds and scallions before being piled into plastic
clamshells to hand off to customers. 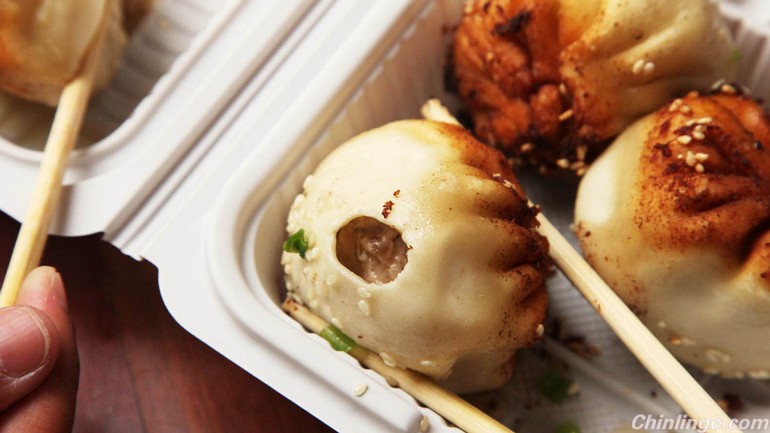 As with almost every other food experience I've had in China so far,
these dumplings were pretty mindblowing, not only for how awesome they
were (and we'll get to that), but in how different they were from any
version I'd had in the US.

In the US, the SJB you find are almost always made of the same dough that is used to make mantou—those
puffy, steamed buns. The result is dumplings with a rather thick
wrapper, with little bubbles of air trapped inside it like a sponge.
Take a look at the bottom photo in this post about the Pan Fried Juicy Pork Buns at Philly's Dim Sum Garden
for an idea of what I'm talking about. That spongy wrapper, in turn,
soaks up internal juice like, well, like a sponge, which means that
unless you eat fast, the delicious soup inside ends up saturating the
dumpling walls and disappearing.

The SJB at Yang's, on the other hand, have a much thinner skin with
almost no leavening whatsoever. Its texture is not as elastic as a XLB,
though it is still pleasantly stretchy. The best part—aside from the
soup inside, of course—is the crispy, crunchy, fried bottom of each
dumpling.

If someone would just go ahead and create a deep-fried soup dumpling that's crisp all over, I'd appreciate it, ok?

0 responses on "Xiao Long Bao are only half the story of soup dumplings in Shanghai! - part 2"