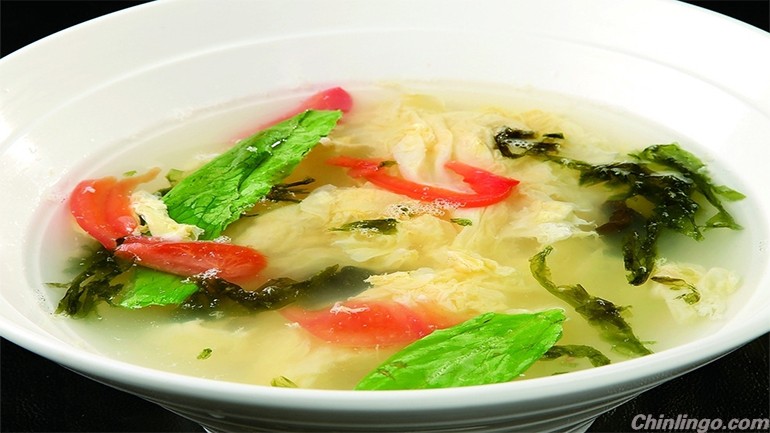 Egg drop soup, literally egg flower soup "dàn huā tāng (蛋花汤)", is a household staple across China. It’s perfect for a quick fix, and as warm and comforting as, well, a good bowl of soup.
The steps to creating it are simple:
1.Boil chicken stock.
2.Whisk eggs.
3.Slowly stir in eggs.
4.Season.
5.Enjoy.

The egg drop soup is a humble dish, but there are many ways to dress it up.

In fact, the signs of my own culinary genius first appeared in a pot of egg drop soup, when I garnished it with kernels of sweet corn, sprigs of cilantro, and delicate portions of artisanal crabmeat (Read: Imitation crabmeat).

My mom seemed impressed, at least.

But really, egg drop soup is one of the first dishes I learned to make, and it’s still a reliable go-to.

When I considered where to begin this series of blog posts about food and China’s gustatory history (gusta-story?), I realized: The egg did come first.

Egg drop soup itself has no origin story, but food historians agree it’s been around for a long time. Domestication of fowl for easy access to the protein in their eggs has been recorded as early as 1,400 B.C.E. in China and Egypt.

In Greece, a bit of lemon flavored the avgolemono; Parmesan did the trick for Italian stracciatella, and in France, egg whites were a key complement to the garlic in le tourin.

In China, the familiar ingredients include chopped scallions, bits of tofu, and a drizzle of sesame oil, but that’s just the beginning of a whole slew of possibility.

Versatility is the beauty of egg drop soup. Tastes vary across regions, with southerners preferring to thicken the broth with cornstarch, and northerners favoring a watery base. Tomatoes, corn, and green peas — all those may get tossed in as well.

Whatever your mood, you can find a version of soup to suit. Here are a few of my favorite additions. (Don’t worry. Imitation crabmeat did not make the list.)

1.Ginger, "jiāng (姜)": I tend to crave egg drop soup above all others when I’m down with a cold, probably because of the light flavors and clear broth.

Adding a tablespoon of ground ginger or a 1-inch length of sliced or grated ginger gives the soup just enough kick to help with congestion. Plus, ginger helps to improve digestion, nausea, and absorption of essential nutrients, so your body gets an extra boost.

2.White Pepper, "bái hú jiāo fěn (白胡椒粉)": White pepper comes from the same peppercorn plant as black pepper, but while black pepper is picked and dried before it’s ripe, white pepper is ground from the mature seed inside the fruit.

This difference produces a distinctive aroma for the white pepper that has been described as “harsh” and burnt,” and the taste can be unusual for some people. I, however, find its subtle spice and vinegary smell perfectly delicious.

Add a pinch of white pepper to your egg drop soup to try it out, but be careful not to overdo it. It’s a powerful flavor.

It often appears to be black or dark green, with perhaps a slight hint of purple? Whatever its color, purple seaweed is chock full of carotenes and vitamins C and B12, and it fits right in with egg drop soup.

Cut one tomato into small sections and lightly fry it in oil before adding to the pot. You can also cook the tomatoes directly inside the pot before adding the broth, making this a one-dish wonder. The soup will have more oil in it this way, though.

5.Spinach, corn kernels, peas, etc. "bō cài, yù mǐ, qīng dòu (菠菜, 玉米, 青豆)": Extra vegetables never hurt anyone. Add a cup of one or all of these and let it cook in the broth before adding the eggs.

Do the same with small cubes of tofu. Or sliced carrots, sliced mushrooms, sliced bamboo. You can even try sliced crabmeat.

6.Dried Shrimp, "xiā mǐ (虾米)": This one is for the bold eater looking for bold flavors.

Dried shrimp can turn some people off with its strong fishiness, as well as its beady black eyes, yet some people can’t keep from throwing a handful into their soup.

The shrimp may need to soak beforehand. You’ll get maximum flavor if you toss in the shrimp right at the beginning, when you are still heating up the broth.

0 responses on "How to make Chinese egg drop soup"