Yuan-dynasty landscapes: Even better than the real thing 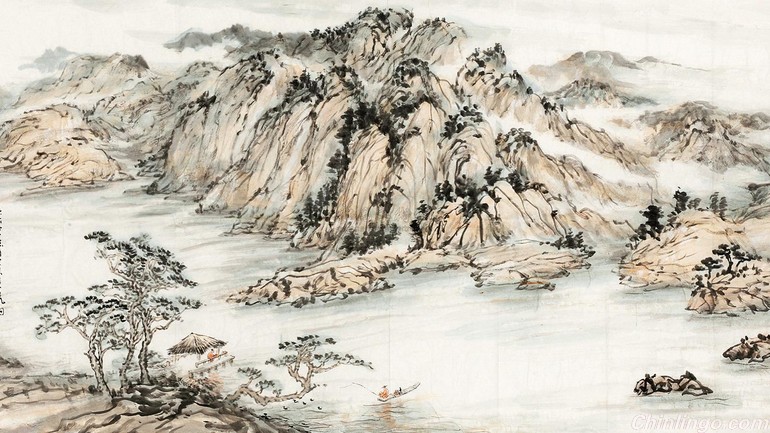 “Dwelling in the Fuchun Mountains” is a famous Chinese landscape painting from the Yuan dynasty (1271–1368). A paper scroll measuring over 22 feet in length, it was revered for its virtuosity and transfixed collectors (a detail from the scroll is pictured). On his deathbed one owner even ordered its burning so that it could accompany him into the afterlife. A nephew managed to save it from the flames, though not before it had been torn in two.

The work inspired an 18th-century emperor, Qianlong, to compose no fewer than 40 poems: he said that the countryside that sprang from the brush of the artist, Huang Gongwang, was better than the real thing. Only later did scholars determine that Qianlong's painting—inscribed with odes he had written and affixed with his seals of appreciation—was actually a fake.

The art of putting ink to paper or silk to render trees, rocks, waters and mountains dates back to the third century AD, and emerged as a distinct genre in China during the Tang dynasty (618-907). After the Tang, artists of the Song dynasty refined and developed new styles. But it was during the subsequent Yuan that Chinese landscape painting, or shanshuihua, took on new meaning. The desolate huts half-obscured by pine trees reflected the artist’s inner life—mind and spirit in retreat from the Mongol forces that now ruled much of China.

An exhibition at the Freer-Sackler Gallery in Washington, DC, called “Style in Chinese Landscape Painting: The Yuan Legacy” considers the styles of four Yuan-dynasty masters whose techniques and aesthetics shaped the landscape traditions that followed them. The influence of a fifth artist, Zhao Mengfu, who worked in the Yuan imperial courts, is also touched upon.

This could not have been an easy show to curate. Few great Yuan works survive, and those that do are mostly housed in museums in East Asia. “Yuan Legacy” contains only two original works by the painters whose impact is celebrated. Instead, it wisely concentrates on later works that show each man's style as it was copied and re-envisioned by inheritors of the tradition.

An exhibition about the Yuan style that primarily shows Ming- and Qing-era paintings may seem perplexing, but it illustrates the idea of a legacy. The show’s curator, Stephen Allee, rightly observes that it is nearly impossible to speak of later Chinese landscapes without referring to earlier eras. The show includes a copy of a portion of “Dwelling in the Fuchun Mountains” that was painted centuries later by Wang Hui, considered one of the greatest Qing painters. Evolution and continuity are both evident.

These works of blacks, greys and occasional other pale colours reveal startling range and expressiveness. For example, painters who drew from the aesthetic of Huang Gongwang, the oldest of the four Yuan artists, admired his voluptuous mountains and towering plateaus, formed by dragging a brush along the paper.

Adherents of the style of Ni Zan tended to prefer dry inks that made their compositions look almost like charcoal drawings, rather than paintings. Lake Tai, on whose shores Ni Zan lived, was a favourite subject of his: the centre of his works is often dominated by a vast, blank lake.

This tranquil simplicity contrasts starkly with the layered brushwork of Wang Meng, whose surfaces are dense with ink. “Dwelling in Seclusion in the Summer Mountains” (1354), one of the two dated Yuan-master paintings on show, has towering, rolling peaks heavily dotted with vegetation. Some lines look as fine as etchings.

But while the show has enjoyable breadth, it is lacking in depth. It offers little sense of what meaning each artist saw in his work. No translation and little context is offered for the inscriptions that are written on many of the pieces. This diminishes the visitor’s experience, since such paintings were thought to be incomplete without beautifully written words. Shanshuihua painters were also often able poets and calligraphers, though some artists and collectors would invite others whose poems and characters they admired to adorn their paintings. In fact, the original version of “Dwelling in the Fuchun Mountains” was lost for years because an early owner of the original sent it off to be written on by calligraphers.

Columns of characters written by Wu Zhen, another Yuan master, appear above the people that float along his expansive scroll, “Fishermen, after Jing Hao” (1342). “Why is his silken line made so very frail and thin?/He only goes into the lake to feed a single person,” reads one poem. “He only fishes for perch, and does not fish for fame,” goes another. The paints were meant to evoke a mood, the words a philosophy. The latter have been left neglected in “Yuan Legacy”, and that is a pity.

吴镇的名画《仿荆浩渔父图》（Fishermen, after Jing Hao）上有众多的题词，但最精妙的还数出自他本人的诗句，其一是“如何小小作丝纶，只向湖中养一身”（Why is his silken line made so very frail and thin?He only goes into the lake to feed a single person），其二则是“只钓鲈鱼不钓名”（He only fishes for perch, and does not fish for fame）。画动情，诗晓理。“元代遗珍”忽略后一点，实在可惜。

0 responses on "Yuan-dynasty landscapes: Even better than the real thing"