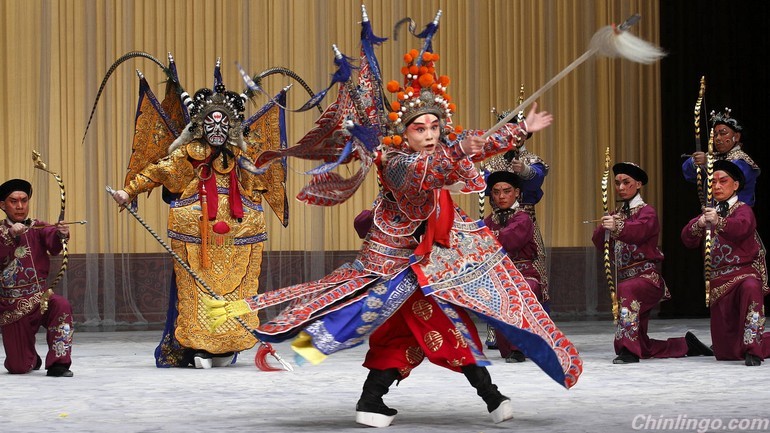 Chinese opera together with Greece tragic-comedy and Indian Sanskrit Opera are the three oldest dramatic art forms in the world. During the Tang Dynasty (618 – 907), the Emperor Taizong established an opera school with the poetic name Liyuan (Pear Garden). From that time on, performers of Chinese opera were referred to as 'disciples of the pear garden'. Since the Yuan Dynasty (1271 – 1368) it has been encouraged by court officials and emperors and has become a traditional art form. During the Qing Dynasty (1644 – 1911), it became fashionable among ordinary people. Performances were watched in tearooms, restaurants, and even around makeshift stages.

It evolved from folk songs, dances, talking, antimasque, and especially distinctive dialectical music. Gradually it combined music, art and literature into one performance on the stage. Accompanied by traditional musical instruments like the Erhu, the gong, and the lute, actors present unique melodies – which may sound strange to foreigners – as well as dialogues which are beautifully written and of high literary value. These dialogs also promoted the development of distinct literary styles, such as Zaju in the Yuan Dynasty. For Chinese, especially older folks, to listen to this kind of opera is a real pleasure.

What appeals to foreigners most might be the different styles of facial make-up, which is one of the highlights and requires distinctive techniques of painting. Exaggerated designs are painted on each performer's face to symbolize a character's personality, role, and fate. This technique may have originated from ancient religions and dance. Audiences who are familiar with opera can know the story by observing the facial painting as well as the costumes. Generally, a red face represents loyalty and bravery; a black face, valor; yellow and white faces, duplicity; and golden and silver faces, mystery.

Besides color, lines also function as symbols. For example, a figure can be painted either all white on his face, or just around the nose. The larger the white area painted, the more viperous the role.

Another technique that fascinates people is the marvelous acrobatics. Players can make fire spray out of their mouths when they act as spirits, or can gallop while squatting to act as a dwarf. This reflects a saying among actors: 'One minute's performance on the stage takes ten years' practice behind the scenes.'

Over the past 800 years, Chinese opera has evolved into many different regional varieties based on local traits and accents. Today, there are over 300 dazzling regional opera styles. Kun opera, which originated around Jiangsu Province, is a typical ancient opera style and features gentleness and clearness. This enabled it to be ranked among the World Oral and Intangible Heritages. Qinqiang opera from Shaanxi, known for its loudness and wildness, and Yu opera, Yue opera, and Huangmei Opera are all very enjoyable. Beijing Opera , the best-known Chinese opera style, was formed from the mingling of these regional styles.