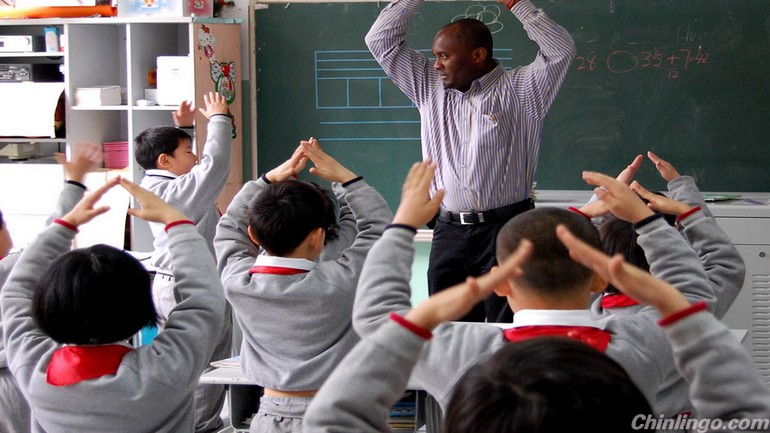 "Wai guo gui zi! Wai guo gui zi!" (Foreign ghost! Foreign ghost!) I heard this term again recently while I was visiting a small town in the countryside of China. The nickname didn't bother me. My English name is certainly not an easy one to pronounce so I wasn't surprised that people found other ways to 'identify' me. In fact, it reminded me of being called "gringo" in Mexico which I had never found offensive. It was just simply humorous. I had always assumed that the term 'foreign ghost' had something to do with the color of my skin and my hair but eventually I discovered that the word could be traced back to a darker time in China's history. According to my friends, the term was used to describe the invasion of the Japanese in the 1930′s and their steal "chickens, goats, lambs, food" and other items of value.

Of course, that war ended many long years ago but the memories and the stories of those invaders still live on and there is understandably still some mistrust by the older generation of any foreigners.Unfortunately, the irresponsible actions of many foreigners in China do not help to alleviate the misgivings that some in China have of the "wai guo ren." Some of these actions seem very trivial but in fact lead Chinese people to believe that foreigners do not have respect for their culture. Throughout China, for example, I have never failed to spot foreigners walking the wrong way around a temple or touching an item that is clearly marked as sacred. It annoys me to see this type of behavior, especially in the case of walking in the wrong direction, when everyone else is clearly walking in one direction. I simply want to disappear or transform into a Chinese person because I know that people in China will judge me based on the actions of these foolish foreigners.

I have also heard stories about foreigners who have cut in line at train stations and restaurants. Granted, the Chinese people are not particularly known for their "keeping in line" skills but there is no question that some foreigners think of themselves as stars anddemand special treatment. Recently, one of my friends got a foreigner fired from her position at a training center because she cussed at him while waiting in line at a KFC. He happened to know her boss and let him know what had happened. She was asked not to come back.

Public drunkeness is probably what irritates me the most about the way that foreigners sometimes behave in China. I enjoy a good beer now and then but I can't tell you how many times I have been mortified to be sitting in a restaurant/bar somewhere and witnessing a foreigner acting like a complete fool. I have seen foreigners yelling at each other, fighting, and treating their servers like garbage. These kind of actions severely damage China's perception of all foreigners.

Finally, I have often been ashamed of how my "fellow" foreigners treat the Chinese people in general. It especially bothers me when foreigners try to impose their culture or their opinion on a Chinese person. I have seen many a foreigner lecture a full grown Chinese adult as if they were children about how "we do things" in other countries. These foreigners talk as if their country is morally and ethically superior to China. There is always a place for exchanging ideas and learning from each other but this process needs to take place from the perspective that we guests in China. And if you spend enough time in China, you will discover that there is alot that you can learn from their culture as well.

I could probably write a book about my observations of how foreigners have treated Chinese people but that isn't necessary. I simply want to urge my fellow teachers in China to remember that we are being watched wherever we go. Your behavior, positive or negative, and the way that you treat other people, will have an effect on how Chinese people view and treat foreigners in the future. Much progress has been made in the relationship between foreigners and Chinese people and you can help foster that relationship by being respectful of the culture and living by the Golden Rule.