Differences between Chinese food in America and China 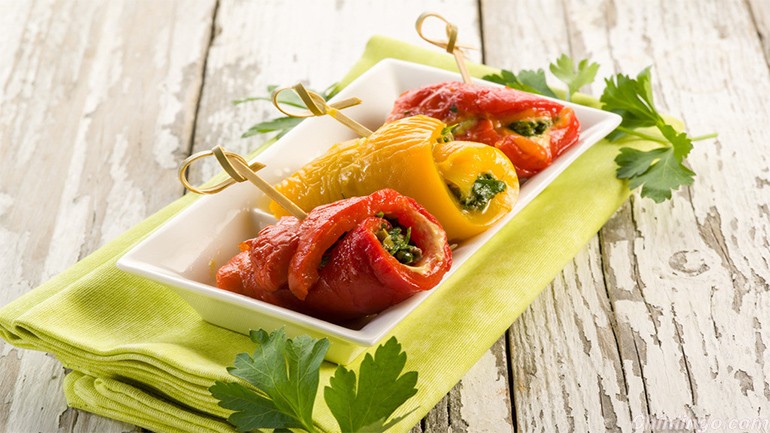 Americans
love to eat Chinese food, whether in a fancy Chinese restaurant with
extravagant décor or at those often crowded, noisy little local spots.
That being said Chinese food found in the U.S. is very different from
the authentic cuisine consumed daily by people in China. How different?
Read below to find out:

The experience of dining in China is far
different than eating at restaurants in America. Manners and menus are
almost entirely opposite.

Menus
in China are usually illustrated hardback books, in which almost every
single dish has a picture. That means a menu typically has around 20
pages, lined with beautiful photos. Chinese people order food according
to the picture, not necessarily the written description in menus.

Furthermore, each table is typically
only given one menu, and when the menu is placed before them, the waiter
stands next to the table ready to write down the order. You do not sit
at the table and talk for several minutes before ordering; you order
when you sit almost immediately.

In China, people are used to dining in
noisy environments, which is considered welcoming and joyful. So, if you
need to call a waiter in China, call loudly. Very loudly. Shout
“Waiter” and wave your hand. Since there is no tipping in China, every
person is your table’s waiter, and it’s appropriate to stop anyone in
the restaurant and ask them for something. This is not rude, it is
expected!

And
cold water? It doesn’t exist at the dinner table in China. Hot water is
almost always served, even in the middle of summer and even while
eating the spiciest food imaginable. And if you order a beer or a bottle
of water, better ask for it cold, as their inclination is to serve it
room temperature.

Of
course, alcohol is a totally different culture in China. Without going
into detail, you simply won’t find a cocktail menu or really any mixed
drinks at a Chinese restaurant. You’ll be lucky to find wine that isn’t
made from rice. Alternatively, many Chinese drink “Baijiu,” a common
Chinese liquor that is also known as “the whisky of China.” Many
Westerners can’t stand the taste.

Once I ate at an expensive Chinese
restaurant in the U.S. that offered “famous roast duck.” As a native
Chinese, I expected it to be a crowded, noisy place filled with laughter
where family members gather around a big round table sharing roast
duck. However, the restaurant turned out to be very quiet. People there
were dressed up in fancy clothing eating roast duck with a candle on
each small table, a scene you would never see in China. It’s interesting
for me to see a roast duck restaurant with such fancy clientele because
in China, ironically people really only dress-up in upscale
Western-style restaurants.

Chinese restaurants in the U.S. also
Americanized themselves by offering receipts and accepting tips from
customers. But In China, people don’t bother with tips or receipts.
Generally no one tips anyone in China. It’s also your job to request a
receipt if you want one. You have to ask for an official “fapiao” which
comes with a government approved serial number.

Generally
speaking, authentic Chinese food puts more attention on vegetables,
bean products, and cooked wheaten food. Most Chinese dishes in the U.S.
focus on a kind of meat, beef, pork or chicken, with vegetables just as
sides or fillers. In China, however, vegetables and bean products (like
Tofu and soybean) are as important as, or even more important than, meat
for a dish. Sometimes, meat is just one of the ten or more different
ingredients used in a dish. Many authentic Chinese dishes contain
several ingredients, which often take a long time to prepare before
cooking.

In addition, Americanized Chinese food
leaves out many ingredients that Americans find unacceptable, including
pig ears, chicken feet, duck blood, jellyfish, etc. For example, bean
vermicelli soup with duck blood cubes is a traditional delicacy in
Nanjing (a major city in south China), which is loved by all ages in
China. But you can hardly find it in the U.S. because duck blood sounds a
bit crazy for Americans. Many other local Chinese foods are in the same
situation.

Similarly, ingredients that are commonly
used in Americanized Chinese dishes may rarely be seen in authentic
Chinese food. Such examples include broccoli, onion, and diary products.
You can find beef with broccoli in almost every Chinese restaurant in
the U.S., but many real Chinese have never seen it before. Instead,
Chinese prefer to cook beef with tomato, potato, or carrot.

Most popular Chinese food in the U.S. is
loaded with salt and sugar, so it tastes sweeter, saltier, and can
often be greasier than authentic Chinese food. Actually, Chinese people
like to use several different spices, a little of each kind, in one
single dish. Besides salt and sugar, there are many other common spices
in China, including dried chili, wild pepper, star anise, Chinese
cinnamon, soybean source, water chestnut powder, etc. MSG is also widely
used in China – you can find it in almost every dish.

However,
it’s impossible to generalize the taste of authentic Chinese food
because people’s tastes in different regions can vary tremendously in
China. For example, many provinces in south China, such as Szechuan,
Yunnan, and Hunan, are famous for their spicy foods, but their spicy
spices are different from each other. People in northeast China are more
likely to add a soybean source when cooking, so their food is
relatively saltier and darker in color. Shanghai people are well known
for having a ‘sweet tooth’.

If there is any dish that is popular in
all regions in China, “Tomato Egg” must be the one. It’s a humble dish
that is often served at home or small restaurants. And as popular as it
is in China, it simply is not found at Chinese food restaurants in
America.

Americanized
Chinese cuisine simplifies cooking steps. In fact, it usually takes
quite a long time for Chinese people to prepare and cook a traditional
Chinese dish because they emphasize the harmony of three features,
“color,” ”aroma,” and ”taste.” Chinese chefs also pay much attention to
how they cut their ingredients. Take Tofu Noodle Potage, a Chinese
vegetarian soup, for example. To prepare this dish, a Chinese chef will
skillfully slice a fist-sized piece of tofu into hundreds of hair-thin
shreds so that it can contribute a silky texture to the soup.

More notably, Americanized Chinese food
is mainly cooked through frying, while Chinese people only fry food
occasionally. Methods such as stewing, braising, baking, steaming,
boiling, and even fermenting are commonly used in authentic Chinese
cuisine, either cold dish or hot dish. Chinese people believe that fried
food is very unhealthy, and may increase the risk of cancer. Instead,
they spend much time boiling nutrient soup and porridge to balance the
body’s Yin and Yang. So, popular Chinese dishes in the U.S., such as
Sweet ‘n’ Sour Chicken and Crab Wontons, are actually rarely seen in
China.

0 responses on "Differences between Chinese food in America and China"