A touch of “Brooklyn Color” in Beijing’s hutong 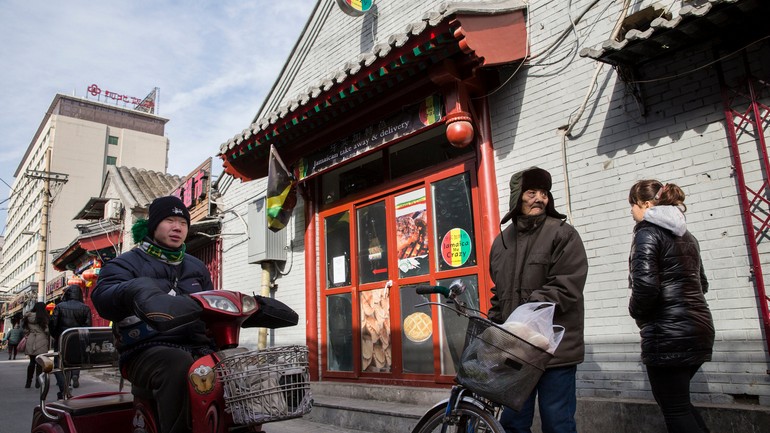 Many of Beijing’s ancient hutongs — alleys formed by the outer wall of courtyard homes — have been erased from the cityscape to make way for new roads and high rises in recent years, much to preservationists’ dismay. The hutongs that have been spared are celebrated as retaining the charm of residential life, with alleys filled with vegetable stalls, kebab stands and tiny shops, and the hidden courtyards occupied by families who have called them home for generations.

The hutongs between the Lama Temple and the Drum and Bell Towers have largely escaped the wrecking ball but have undergone a dramatic shift nonetheless. Old-timers have been joined by a new breed of Chinese and expatriate residents clad in skinny jeans riding fixed-gear bikes, a loyal customer base for restaurants that offer locavore menu options and bars that serve drinks like Pabst Blue Ribbon. In this corner of Beijing, the traditional hutong has been overrun not by a large-scale development but by a very Brooklyn sensibility.

“Beijing’s a very big, monotonous place, but for me the Gulou area is like an oasis in the desert,” said Hu Xiaodi, 22, using the Chinese name for the neighborhood around the Drum and Bell Towers. She lives in the hutongs despite a 40-minute commute by bike to work: “Every day’s an adventure.” She is the target audience for Natooke, a fixed-gear bike store that doubles as, yes, a juggling shop that opened in 2009. Nearby, Serk, a bike shop, cafe and bar, opened in June and sells everything from $240 commuters to $8,000 race bikes. Both shops organize rides in and around the city, which, despite the smog, is one of the best in the world for cycling, flat and easy to navigate.

For those who are not on two wheels, there is an abundance of new restaurants. One, the Taco Bar, opened in August as a speakeasy that serves food made by a Taiwanese-American chef from Texas. “Our food is simple,” said Kin Hong, 29, the owner. “We are able to make most all of our product in-house on a daily basis using local ingredients but still create the same result as if you were in Mexico City.” It has a limited menu with a sliver of imported ingredients.

Mercante, is arguably the best Italian restaurant in town. Run by Omar Maseroli, 36, and his girlfriend, Yuan Yuan, 31, a Beijing native, Mercante opened a year ago and offers fresh pasta, cold cuts, cheeses and wine from Reggio Emilia and Parma in northern Italy, the cities Mr. Maseroli calls home.

Perhaps the most notable change in the hutongs has been the influx of bars in recent years. Great Leap, a brewery opened by an American expat in 2010, started Beijing’s craft beer scene. Mao Mao Chong is a pioneer of creative cocktails in the alleys, known for its drinks infused with mala, or numbing pepper. Mai Bar, a stylish bar with a small courtyard, offers traditional and modern cocktails and two coolers full of imported beer.

Visitors to the area who spend an evening of drinking there can call the hutongs home for the night. The Orchid, a charming 10-room boutique hotel, is just a few hutongs east of the Drum and Bell Towers.

0 responses on "A touch of "Brooklyn Color" in Beijing's hutong"