Near Qingdao, Hiking a Magical Mountain

The sun was low and the air still hot when I swallowed the last drops from my canteen. My companion and I were hiking up the southern pass of Laoshan, a mountain of sun-bleached granite and hidden oases, rising over the Yellow Sea on China’s eastern shore.

The trail began at Dahedong, a village in the shadow of a great dam, and climbed up steep terraces of tea fields before winding along a dry creek, a tumble of boulders suspended in mid-flow down the slope. When I touched them to steady myself, they seemed to pull the dampness from my skin and stow it away. There had been no rain for two months, and even the stones were thirsty.

Along the path, lilies bloomed like orange flares, and hikers before us had marked the way by knotting red ribbons to the tree branches as is done in Chinese temples. The forest directed us with the soft rustle of a thousand prayers. Still, somehow we had gotten lost.

The Laoshan Scenic District is an easy drive along the coast from the city of Qingdao, 19 miles or so to the west. About two million visitors come each year to ascend Laoshan’s peaks, which are strewed with oddly shaped moraines resembling stacks of books and curving horns. Around the mountain’s pale stones, cedar, elm and pine sprout in lush green tufts, fed by rainfall-charged aquifers deep underground. The water filters through the strata and then courses up from crevices in the granite before collecting in clear, azure pools that are scattered all over the mountain.

This otherworldly beauty was not lost on the Taoists, who some 3,000 years ago deemed the mountain a home of the Immortals, elevated beings so removed from worldly concerns that their skin is unlined by worry. Though most of the temples here have been lost to revolutions and time, monks in blue and white still tend the sprawling grounds of Taiqing Palace, a Taoist temple that has stood at the mountain’s base for the two millenniums since the Western Han dynasty. For about as long, the monks have credited their good health to drinking from the Shenshui Quan, the Spring of the Immortals, a slow-moving seep that still feeds the temple grounds. 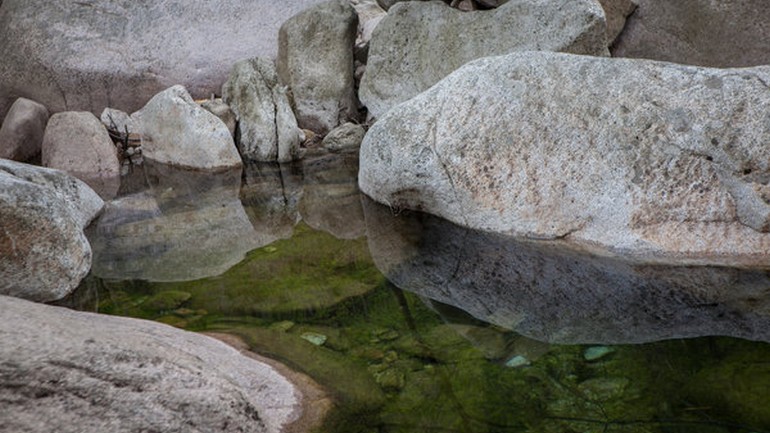 There is a story here of a time when the mountain had no water, and the villagers were starving. A kind spirit gave a peasant a magical vessel that multiplied whatever was put into it, and the villagers were saved. When greedy officials came to seize the treasure, the peasant leapt from the summit, and where his body and shards of the vessel fell, freshwater springs appeared.

By the Qin dynasty and for centuries after that, emperors made pilgrimages here, hoping to meet the beings who controlled the wind and the rain and bore such gifts.

The mountain regularly appeared as a backdrop in stories and songs about unexplained happenings. In the 17th century, the author known in writing circles as the Last of the Immortals, Pu Songling, lived on the Taiqing Palace’s grounds and wrote tales of entanglements with magic on the mountain. In one, a lonely poet befriends two sisters whose lives are tied to the fates of flowers. In another, a Taoist priest grants a boastful disciple the gift of walking through walls — only to take it back at the worst time. 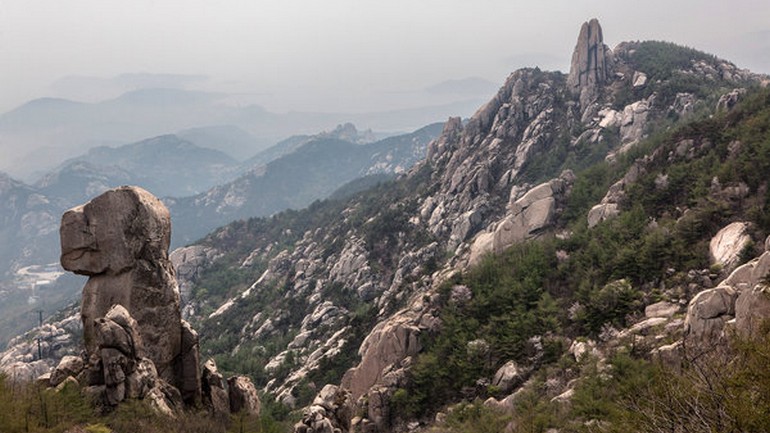 I had spent the days before my hike wandering in the city of Qingdao, which is so close to Laoshan that on a clear morning, Laoshan’s peaks appear like a golden mirage, wavering in the distance. To most in the city, Laoshan is no longer a physical place but a symbol of everything that is not urban. That makes the mountain a very marketable brand. In the old part of town, street vendors along the steps of Huangdao sell fragrant mushrooms and sweet cherries grown in the foothills of Laoshan. In the central business district, waiters in upscale restaurants recommend the tuji — chickens that are free to scratch on the mountainside — at double the price of a regular chicken. In five-star hotels, the bottled water is always Laoshan Mineral Water brand.

The city’s best-known product, its namesake Tsingtao beer, still touts its mountain roots. In 1903, the German-British backed Nordic Brewery Company brewed its first lagers using a recipe of Moravian malt, Bohemian and Bavarian hops, and spring water carted from Laoshan. Later, a pipeline connected the Laoshan water table directly to wells on the brewery grounds. Today Tsingtao produces so much beer in its breweries around China — 122 million kegs’ worth a year — that Laoshan water is reserved only for beer brewed in Qingdao.

There is still one original well left, a small hole ringed in hexagonal stone behind the brewery’s busy loading docks; it is no longer used and not part of the official tour. A guide tried to warn me away. “Be careful of the ghosts,” she said, as she backed far away.

The sun was setting behind Laoshan’s foothills when we rounded a bend in the trail, and there the dusty soil turned into packed mud. The mud ringed a copper-green pool about as wide and as deep as a swimming pool, the “Prinzenbad” — Prince’s Bath, according to a boulder beside it inscribed when German entrepreneurs ran beer halls and a sanitarium on the mountain in the early 20th century. The water was clear but it was warm and still, save for schools of tadpoles that roiled in black ribbons. We splashed our faces and continued on.

Lao Huang’s house was a low-slung shelter of stone surrounded by gardens and tea fields that extended deep into the gentle slope of a U-shaped valley. Lao Huang was not there, but his wife, He Fenghong, appeared from behind a bundle of firewood, her baby grandson strapped to her back.

“You must be thirsty,” she said. Soon she was pouring tea brewed from leaves she had picked from the bushes all around the house. We gulped it down, and then helped her catch one of the chickens roaming in the yard for our dinner.

Like his wife, Lao Huang looked many years younger than his age, which he said was “still not yet 50.” I asked him how he had managed to find himself in such a beautiful place, and half-jokingly he explained that no one else wanted to have to carry everything on their backs. It took him three days of hiking every few months to bring in what they needed, he said.

“You can have anything you want in the city,” Lao Huang said. But, he noted, “You have what you need in the mountains.” Then he laughed. He had a way of talking about things in short, profound sentences capped with raucous laughter.

In the morning, we woke to a rooster and then a cacophony of sparrows, turtledoves and Lao Huang’s pair of yellow dogs calling to the sun. We watched the mist slowly blanket Laoshan’s clefts and valleys in white, as we ate our breakfast of eggs, rice porridge and tea. Then, with full stomachs, we headed over the pass.

When we reached the Beijiushui Scenic Area on the other side of the mountain, we joined the tourists on the paved walkways as they clustered around the posted signs and inscriptions carved into the canyon walls that gave every bend in the water a name. We passed a chain of small pools, each an increasingly saturated shade of blue as we drew closer to their source, Chaoyin Pubu, a waterfall that was named for the sound of the ocean tides.

Just downstream, people were crouched at the pool’s edge marveling at the limpid water and drawing deep sips of it from cupped hands. I made my way down, too, and filled my canteen. I drank it on the drive back to Qingdao, as the sky opened up and it started to rain.

0 responses on "Near Qingdao, Hiking a Magical Mountain"