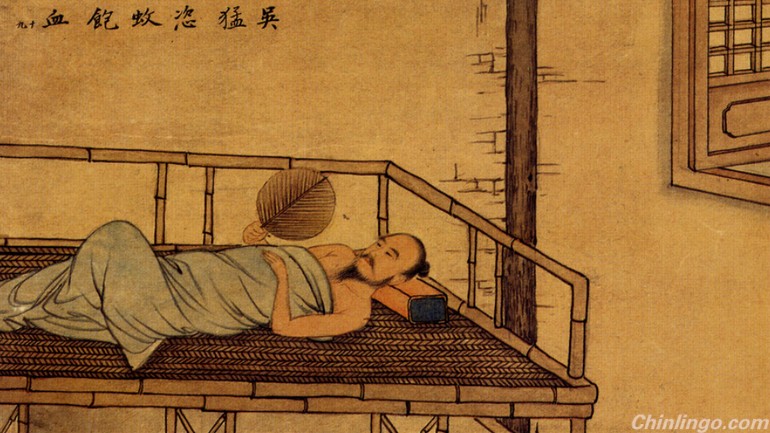 His family was extremely poor and could not afford mosquito netting. On hot
summer nights the mosquitoes would come swarming in as thick as smoke.

The little boy would remove his shirt and let the insects land on his bare
skin. He would watch then drink their fill of his blood, and fly away; he
wouldn't raise a hand to shoo them off, no matter how painfully they stung him.
Wu Meng wasn't a fool, so why didn't he brush the bugs
away?

He knew that his parents had no netting at their bedside. If he drove the
mosquitoes away from his body, they would surely fly over and wake up his mother
and father with their stinging.

So the devoted son simply let the mosquitoes drink his blood instead. So that
his parents wouldn't know about his sacrifice and demand that he stop, the boy
would wake up earlier than they, slip his shirt over his swollen torso, and
return to his own bed.

But one morning, being tired from loss of sleep, he forgot to wake up and
pull on his shirt.

His father arose and found his son asleep by his bed. He looked at the boy' s
pathetic, mosquito-bitten skin that was covered with red welts, and understood
immediately what Wu Meng had done.

Mr. Wu woke up his wife and told her the story. The two parents, deeply moved
by their son's unselfish concern for them, began to cry. They were so touched,
their sounds of sobbing could be heard by the neighbors. From all sides the
neighbors gathered to investigate the matter, and learned about Wu Meng's
sacrifice on behalf of hi s
parents.

Everyone thought that the boy's attitude of filial respect was most
remarkable, especially for one only eight years old. Someone reported the
incident to the local magistrate, who wrote a memorandum to the Dragon Throne,
to inform the imperial court.

The matter thus came to the attention of the Emperor, who rewarded Wu Meng
with a scholarship to the academy. Further, he gave the family a set of mosquito
nets and a stipend, so that they never again lacked the necessities of
life.

0 responses on "Attracting mosquitoes to drink his blood: Wu Meng "