Resigning office to search for his mother: Zhu Shouchang 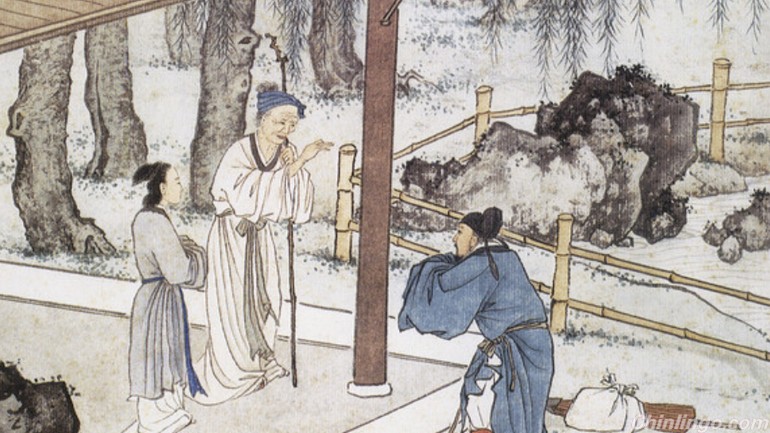 A man of the Song Dynasty named Zhu Shouchang lost his mother at age seven in
this way: His mother was a concubine, and his father's first wife, consumed by
jealousy over the concubine's favor with her husband, drove the woman out of the
house, thereby cutting off contact between Shouchang and his mother. The boy
went to live with his father and step-mother from age seven
on.

Zhu Shouchang grew up and served the Song Dynasty's "Celestial Ruler"
(Shenzong) as an official.

Suddenly one day he felt an overwhelming impulse to find his real mother and
take care of her in proper style.

This impulse continued to grow, until he had to quit his post in the civil
service and set off in search of her.

His filial quest lead him through torrential rains and gale winds, as he
traveled on, asking everybody he met for news of his mother.

Although he found no trace of her, meeting nothing but mis information or
ignorance, the young man never gave up hope, but only deepened the sincerity of
his single-minded quest.

One day a man told him that his mother lived nearby, in Tongzhou, on the
banks of the Unity River in modern-day Shanxi province.

Delighted with the news, Shouchang hurried on to Unity River, and arrived
after enduring great toil and suffering.

Having traveled so fast, he fainted by the roadside near the outskirts of
town.

A crowd soon gathered, and someone handed the man a cup of ginger tea, to
revive him. The townspeople asked, Where are you from?" "What is your business
that you overexerted this way?"

He told the whole story to the crowd, and related all that he had experienced
in search of his mother.

From the midst of the throng stepped an old woman. "You are my son! I haven't
seen you for fifty years!" cried the lady, her voice choked with tears of joy.

The weary traveler, having realized his heart's desire, happily embraced his
mother and shortly thereafter, took her home to care for her
properly.

0 responses on "Resigning office to search for his mother: Zhu Shouchang "