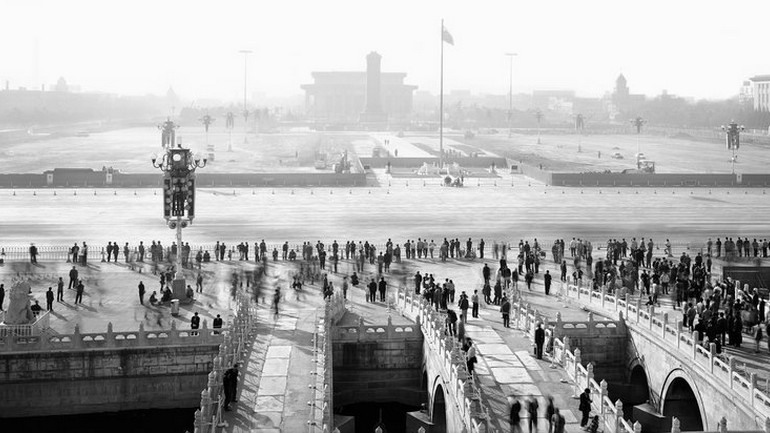 Lois Conner calls herself a collector of landscapes. The fascination started in childhood, when she was mesmerized by the panoramas she glimpsed on family road trips. But it turned into an artistic mission over the last three decades as she traveled through China with her view camera in search of images layered with detail and history.

And to think, her life’s work started almost by accident.

She was a graduate student in photography at Yale, from 1979 to 1981, when she had to take several electives outside of her medium. She chose a course on Ming dynasty landscape painting, where she was struck by the “Dr. Seuss-like” scenes of the Li River, in what is now Guilin.

“I asked my professor, why did they make up that kind of landscape?” she recalled. “And he said, ‘That place really exists.’ ”

That’s when she knew she had to go to China. A 1984 Guggenheim Fellowship got her there. Her insatiable curiosity has kept her returning ever since. Her new book and solo exhibition, “Beijing: Contemporary and Imperial,” on view at the Cleveland Museum through June 29, offers up cinematic scenes of tangled trees and imperial gardens juxtaposed against stark, modern architecture. 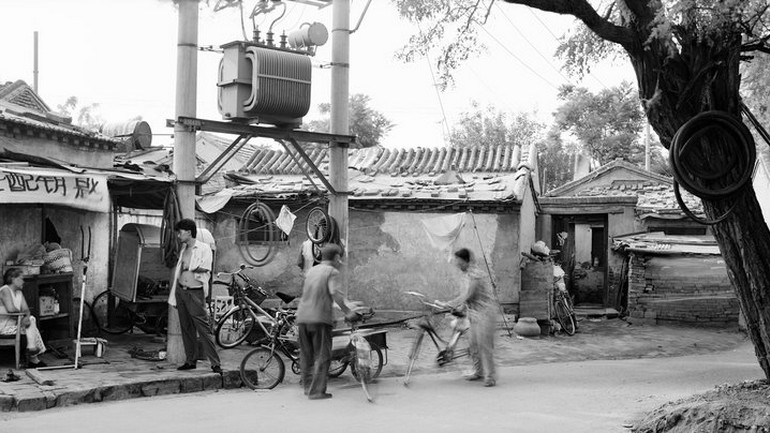 “In a way it’s unknowable,” Ms. Conner said. “I started on something and I just feel like it’s never going to be finished.”Serendipity played a role in her becoming a photographer. Raised in southern Pennsylvania, Ms. Conner knew from an early age she wanted to be an artist. In her teens, she apprenticed herself to a painter who lived next door. She set off for New York intent on studying fashion design. She took a job as a secretary at the United Nations to pay the rent. She took courses in tap dancing, art and photography out of curiosity. Philippe Halsman, her photography teacher at the New School, asked her why she was studying fashion.

“I could not answer the question,” she said.

That was enough to have her transfer to Pratt Institute to study photography. It was there she first encountered a view camera.

“There was something about having the camera on the tripod that allowed me to pause,” she said. “It just made sense to me. My sensibilities are more contemplative.”

She needed that quiet time, given her schedule. By day she was at school in Brooklyn. Evenings she worked at the United Nations. Lunch was at midnight. At least when she started traveling for the United Nations she was able to afford a proper lens and tripod.

“Traveling suited me,” she said. “When on the road I would try to think of what other road had looked this way, or how suddenly the landscape in front of me looked like China or other places I’d never been.” 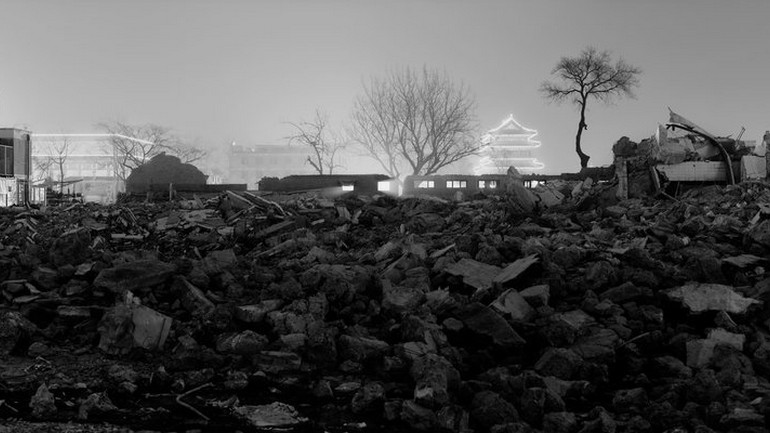 In 1984, she left the United Nations to become a full-time photographer.Her encounter with Chinese landscape painting prompted her to think in panoramas, which she eventually made with a 7×17 banquet camera. The camera was originally used in the late 19th century for photographing large gatherings, and its format and huge negatives ensured that throngs of sharply dressed guests would remain in equally sharp focus.

During her three decades in China, she noticed many changes, like cities emerging seemingly out of nowhere. 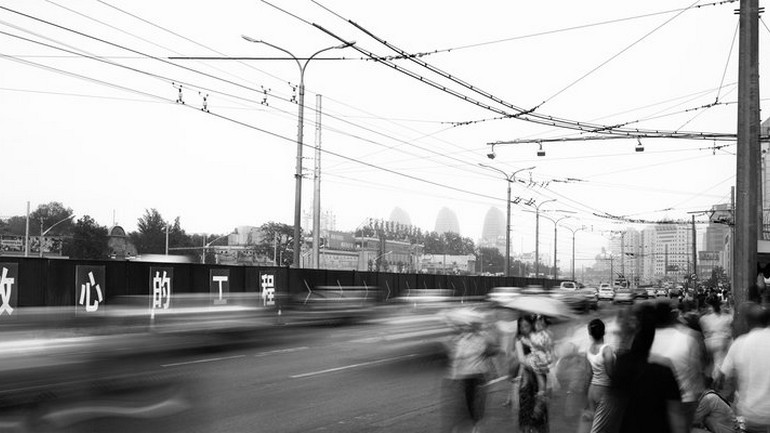 “Interior of the Bank of China During Construction” shows one of the first of the new architectural landmarks in Beijing, with its 130-foot, winglike interior obscured by a waffle of scaffolding in a tight frame, blotting the sky. Conversely, “Solitary Arch, Changchun Yuan, Yuanming Yuan,” shows the skeleton of a snow-topped vault flanked by thin tilted trees, an entrance into a world both magical and removed. The wall was once apart of a Western palace designed by Jesuit missionaries in the mid-18th century for the Qianlong emperor and served as both a de facto center for the Chinese Empire and a site for Chinese culture. 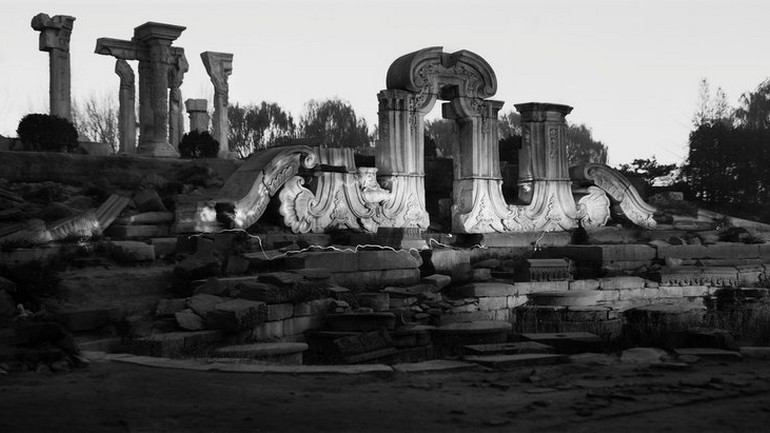 Once part of a trio of its kind known as the Garden of Perfect Brightness, the wall was destroyed in 1860 by the British and the French. All that remains is this national ruin, a reminder of these European wounds.

But the photograph is doubly significant. It was a turning point in Ms. Conner’s project, when she started her longtime collaboration with Geremie Barmé, a leading expert on Chinese culture and history. It also sparked her obsession with the lotus flower, which has appeared in her work ever since. 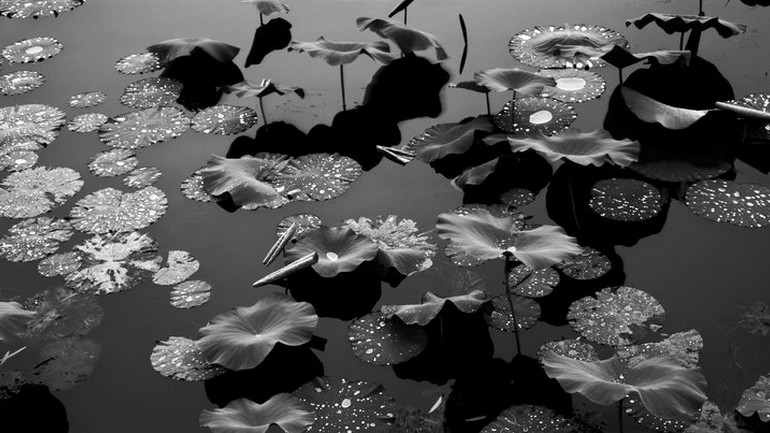 “It was raining and it was summer,” Ms. Conner said. “I got soaking wet. I just wanted to go home and take a shower. But, all of the sudden, I noticed these lotuses and water droplets sparkling on top of them.”Between her trips to China, Ms. Conner was busy teaching. She spent 10 years at Yale as both director of undergraduate photography and a professor in the graduate school.

If she is not in China or teaching, Ms. Conner is processing her film or platinum printing in her apartment. The process is meticulous, but she wants her work to be believable, no matter how long it takes.

“The most important thing is not an artistic career or big pile of money, but to have that group of prints or the body of work that matters,” she said.

“Atget is the perfect example,” she said, referring to the French photographer Eugène Atget. “He put all the money into his work, but look what he has given us, it’s profound and encyclopedic, a life’s work. That’s what I aspire to at the end of my life, to have that body of work. Not fame, not fortune, not recognition. I have enough right now.”

What she cannot get enough of, however, is something that is endlessly enchanting. The lotus.

In one triptych, the flowers are scattered randomly, and yet there is a sense of order. If you stare long enough, you will discover whole worlds, villages, people, faces, eyes. Shadows become reflections; light sparkles like dabs of paint.