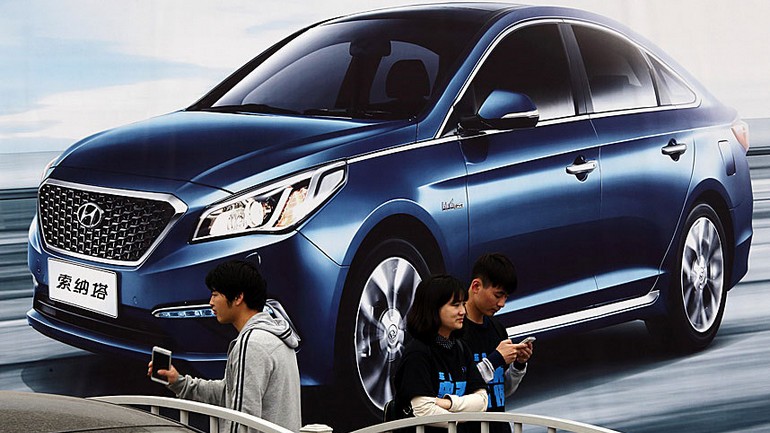 China's dominant position as the number one global car market has been underlined at the vast Shanghai auto show as manufacturers showed off their latest wares, despite the sales growth in the country hitting the brakes.

Major manufacturers said they expected the breakneck increases enjoyed over past years to ease, with the country’s economic expansion falling to its lowest level since 1990, as GDP rose by “just” 7.4pc. According to industry data 23m cars were sold in China in 2014 – more than a quarter of the global total – but the country’s annual sales increase of 6.9pc was just half that of the previous year.

However, major Western manufacturers still see the opportunities China holds – particularly in the premium sector as the country’s middle class explodes – with Jaguar Land Rover (JLR) expecting to deliver a performance that would “impress” other markets.

Having reported a sales rise of 28pc last year, Bob Grace, JLR’s China president, said: “We don’t expect to see the same percentage levels as the volume gets bigger. But whatever happens [with GDP growth] JLR will beat the market.”

JLR represented 122,000 of the 1.3m premium cars sold in China last year, and Mr Grace said by 2020 sales in the upmarket sector could hit 3m, bigger than the entire UK market.

“By some way China is the world’s biggest market and has still got the potential to grow massively over the next 10 to 15 years,” he said.

The executive said his company’s heritage makes its vehicles a hit with Chinese consumers who are radically different from those in the rest of the world.

“British-designed products have a cachet out here and with the [baby] Range Rover Evoque we are seeing buyers who are close to 10 years younger than in the UK. They are in their early 20s and 30s with disposable incomes markedly bigger than in the UK. These are people who are buying their first car and who haven’t driven much, they are used to be being chauffeured.”

“There will be an explosion in used car sales – the sheer volume of new cars going into the market has to go somewhere,” he said. “There will also be opportunities offering financial services to buyers, meaning that people will be able to get into the brand at a lower price.”

BMW’s 7pc sales increase in China in the first quarter is a “normalising performance”, according to global sales chief Ian Robertson, and a pace he expects to continue this year and next.

However, the German company – which owns Mini and Rolls-Royce – sees China’s middle-class expansion as offering the chance to push all of its brands.

“In China the market was first to develop from the top down,” said Peter Schwarzenbauer, a member of BMW’s global board, referring to the very wealthy leading demand by buying luxury cars such as Rolls-Royces as the country opened up to foreign manufacturers. “Normally markets start at the bottom and then move up, here was the opposite. We are starting to see younger people coming to the market and the compact sector developing.”

Last year the company – which produces Minis at its Oxford plant – sold 30,000 of the iconic cars and expects this to increase as young Chinese look for a fashionable smaller vehicle.

Britain still has attractions for international manufacturers, according to Li Shufu, the billionaire chairman of Geely, the owner of the Volvo and London Taxi Company (LTC) brands. Last month Geely announced a £250m investment in a new factory near Coventry to make the iconic black cabs.

Mr Li said: “The decision was based on business logic. LTC is deeply rooted in the UK and its DNA is very much there. It makes no sense to disregard its roots and make its vehicles elsewhere.”

He added that lobbying by government had played a substantial part in the decision to build the factory.