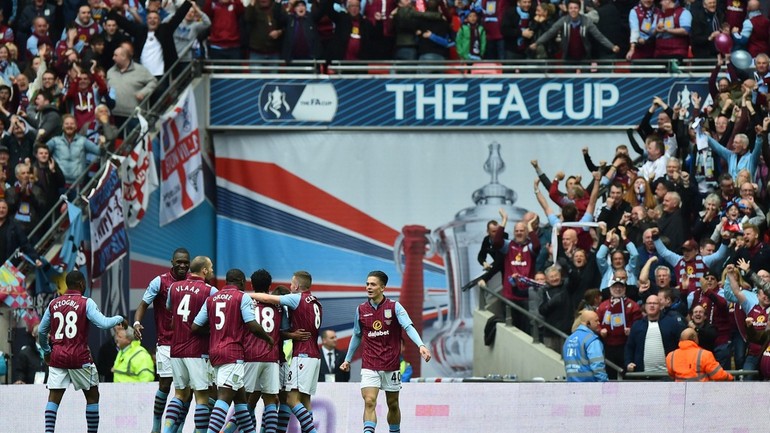 Tim Sherwood's side stunned Liverpool on Sunday to set up a showdown against Arsenal on May 30 in FA Cup final. The group have also held talks with neighboring West Brom as a back-up plan as the move for Villa would depend on them avoiding relegation, according to reports from English daily Mirror.

Mirror said the consortium already have representatives in England and are doing due diligence ahead of completing a Villa deal in early June.

They have been at the training ground and toured the club as wantaway owner Randy Lerner is willing to sell for around 150 million pounds ($225 million).

Four miles away, Baggies chairman Jeremy Peace has also put his club up for sale – and the same Chinese group are interested in Albion as an alternative.

Peace, who has shown the group around their stadium and facilities, is holding out for upwards of 100 million pounds ($149 million).

The takeover for Villa is part of Chinese investers' purchase of sports industry worldwide.

A Chinese company has launched a crowdfunding initiative to raise at least one billion euros ($1.08 billion) to buy renowned Italian soccer club AC Milan, according to Fu Yixiang, vice president of the Italy-China Chamber of Commerce.

Fu said on April 8 that five companies have been linked to a possible takeover of the club.

Four are based in China — beverage maker Wahaha, real estate developer Wanda, telecommunications giants Huawei and e-commerce magnate Alibaba, and the other interested is a Thai company, Fu said.

Chinese company is also in a deal to buy historic French club FC Sochaux, which could be completed in May.

Tech Pro Technology Development company, a Hong Kong-listed electrical components manufacturer, would pay seven million euros for the 87-year-old club. The deal could be finalized in May, according to Agence France-Presse.

In January, China's United Vansen International Sports Corporation made it public that they had almost finished the purchase of Dutch club Alles Door Oefening Den Haag.

0 responses on "China speeds up purchase of sports assets worldwide"