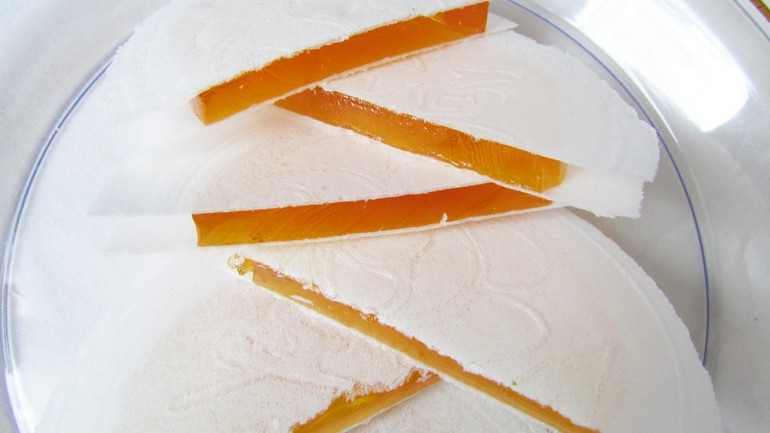 Fulingbing, also called Fulingjiabing and often translated as Tuckahoe Pie, is a traditional nourishing snack with good reputation in Beijing. The crust of Tuckahoe Pie is made of Tuckahoe powders and refined flour. Its stuffing sandwiched between the crusts is a mixture of honey, granulated sugar, confect, pinecones and crushed kernels. In the shape of a full moon, it is paper-thin, snow-white, delicious and unique in flavor. Highly nutritious and tasty, it contains the protein and various vitamins for human body. It has medical effects such as nourishing the liver and kidney, restoring the energy and lubricating the intestines. It can also strengthen the body, improve the complexion and protect the skin if eaten regularly.

Tuckahoe Pie was originally a palace snack. As is said, once Empress Dowager Cixi of the Qing Dynasty fell ill and had no appetite. The royal chefs cudgel their brains for seeking some traditional Chinese medicines that could invigorate the spleen and stimulate the appetite. Among them, there was the herb Tuckahoe grown in Yunnan and Guizhou provinces. Sweet and mild, it could invigorate the spleen, calm the nerves, enhance fluid circulation and increase the discharge of urine. Therefore, the chefs invented a new snack called Tuckahoe Pie. Its main ingredients were pine nuts, peach kernels, sweet-scented Osman thus, sugar and some Tuckahoe powders. The crust was made of high-quality starch. After eating the fine snack, Empress Dowager Cixi was fairly satisfied. Later, she often granted the pie to the ministers of the palace as a reward. As a result, Tuckahoe Pie became a famous palace snack with its price increased by many times. Afterwards, the snack was introduced to the folk and became a popular snack in Beijing.

The present-day Beijing Tuckahoe Pie is made by succeeding the traditional recipe of the imperial kitchen of the Qing Dynasty and constantly improving the ingredients and the processing. The paper-thin crust serves as the wrapper of the stuffing. The pictures printed on the surface of the crust are rather clear, exquisite and distinctive, making the pie more artistic. Due to its high quality and pleasant taste, it is very popular all over China.