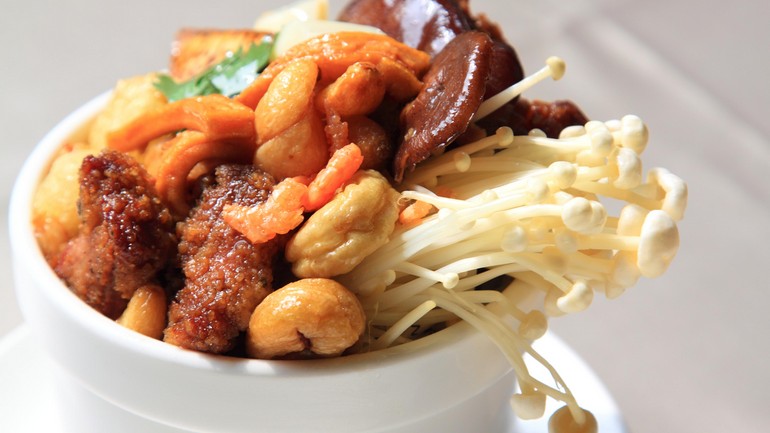 This is a well-known dish of Fuzhou. It is made of an assortment of materials: shark's fin, shark's lip, fish maw, abalone, squid, sea cucumber, chicken breast, duck chops, pork tripe, pork leg, minced ham, mutton elbow, dried scallop, winter bamboo shoots, xianggu mushrooms, and soon, These are seasoned and steamed separately and then put into a small-mouthed clay jar together with cooking wine and a dozen or so boiled pigeon eggs. The jar is covered and put on intense fire first and then simmered for some time on slow fire. Four or five ounces of a local liquor is added into the jar, which is kept simmering for another five minutes. Then the dish is ready.

The origin of the dish is explained by a local story. A Fuzhou scholar of the Qing Dynasty went picnicking with friends in the suburbs and he put all the ham, chicken, etc. he had with him in a wine jar which he heated over charcoal fire before eating, The attractive smell of the food spread in the air all the way to a nearby temple. It was so inviting that the monks, who were supposed to be vegetarians, jumped over the temple wall and partook heartily of the scholar's picnic. One of them on this occasion wrote a poem in praise of the dish, of which a line reads: "Even Buddha himself would jump the wall to come over", hence the name of the dish.

0 responses on "Buddha Jumps the Wall"