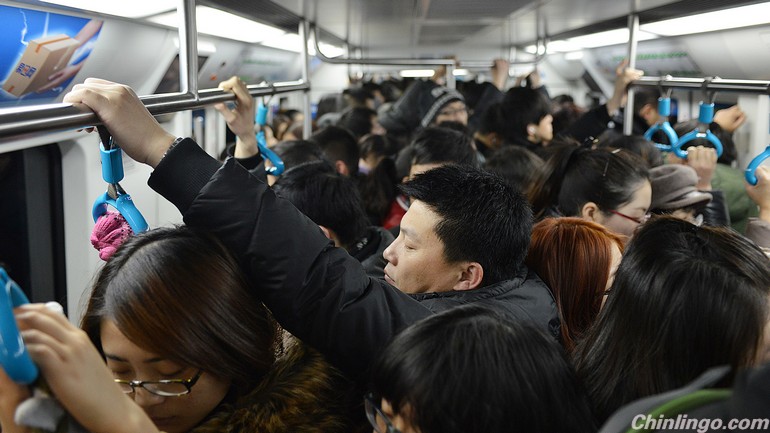 A recent benchmark study released by a global traffic navigation company, TomTom International BV, ranks 218 cities worldwide by their traffic congestion levels. Although China's first-tier cities like Beijing, Shanghai and Guangzhou are not the very worst, they rank among the top 50 for congested, and socially and economically costly roads.The TomTom Traffic Index is a comprehensive indicator measuring the congestion levels of large cities worldwide, calculated by aggregating historical user-generated GPS measurement data. Istanbul, Turkey, came out at the top of this ranking, with a congestion level of 58 percent, meaning each journey takes an extra 58 percent of the time it would when the roads are clear. Congestion in the evening peak hour reaches 109 percent. China has 22 cities in this unfortunate list. Among 146 cities with a population of over 800,000, Chongqing is ranked 12th for traffic congestion worldwide, followed by Tianjin (14th), Beijing (15th), Guangzhou (17th), Chengdu (19th), and Shanghai (24th). It is not the first time Chinese major cities have been rated poorly with regard to traffic efficiency. Ordinary residents have become used to daily terrible traffic in many Chinese cities. Traffic jams are expensive. Commuters in Beijing, for instance, are delayed by an average of 24 minutes a day. This costs millions of hours of work, and people struggling against traffic problems are usually less likely to enjoy their lives and happily work for their employers, which substantially undermines urban livability and work productivity.Traffic congestion also contributes to soaring urban air pollution in many cities, further worsening the pain suffered by ordinary residents. A recent report commissioned by the Chinese Ministry of Environmental Protection broke down the ingredients of air pollutants in large cities, and vehicle exhaust was emphasized as one of the key sources of air pollution. Urban districts plagued by traffic congestion cannot limitlessly expand, and the government cannot build more roads and tunnels due to increasingly scarce urban land area. We need smart solutions to address traffic issues. A two-pronged approach should be added to the existing toolbox of urban traffic administrators.But we can design more effective negative incentives for car ownership. Regular drivers are often reluctant to switch to alternative mass traffic modes such as bus and metro, while more and more urban residents are looking forward to their upcoming car ownership. We should give them strong incentives to change the way they commute.Singapore, for instance, employs a certificate of entitlement and electric road pricing to make vehicle ownership an unaffordable and expensive option for ordinary households. Just one tenth of its residents, or one third of its households, own cars, with the majority of the public relying on public transit.We must also encourage commuters to use affordable, efficient and comfortable public transit to meet their commuting demands. The government should work closely with public transit operators to deliver quality bus and metro services that can sustainably maintain commuters' satisfaction and trust.China was famous as a land of bicycles last century. The public bike program increasingly implemented in Chinese cities like Hangzhou and Beijing can also help mitigate traffic issues and connect commuters seamlessly.To be cautious, rapid road traffic may not always mean good news for commuters relying on public transit. Ironically, it may even attract commuters to switch to autos. The traffic administration must balance private and public traffic modes, the two ends of urban transportation policies.The TomTom database specifies various measurement on traffic congestion for each ranked city, and city governments can learn and improve their traffic systems by digging into these big-data sources. The measurements based on navigational data, however, are prone to the limitation of navigable vehicle distance, since only data from vehicles equipped with TomTom navigators are used in the calculations. It is up to each city to draw on multiple sources of data to generate usable information to navigate their transportation policymaking.