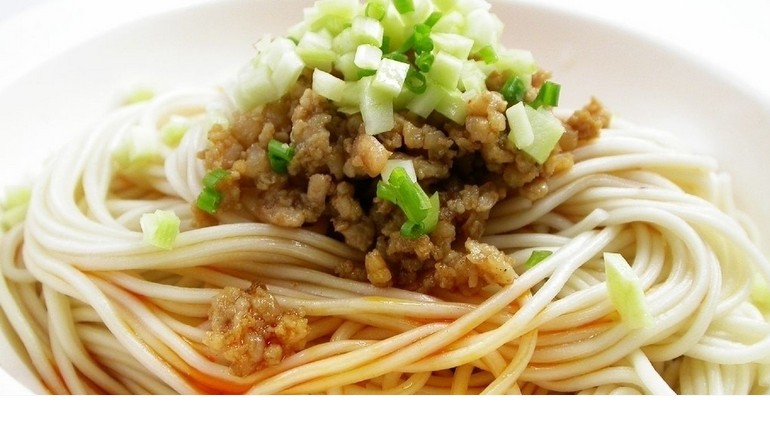 Dandan noodles (noodles with spicy hot sauce), a famous snack of Chengdu, is prepared by rolling the dough into noodles, boiling the noodles and then tossing with fried minced pork. With thin noodles, sweet-smelling sauce and slightly hot taste, the noodles are very tasty. This dish is widely known in Sichuan and often served as a snack during dinner.
担担面（辣酱面）是著名的成都小吃。用面粉擀制成面条，煮熟，舀上炒制的猪肉末而成。成菜面条细薄，卤汁酥香，咸鲜微辣，香气扑鼻，十分入味。此菜在四川广为流传，常作为筵席点心。

Among the various Dandan noodles, the most famous one is that offered by Chen Baobao, which was established in 1841 by a peddler named Chen Baobao in Zigong. Dandan noodles got its name in a simple way: noodles used to be sold in baskets by men carrying portable stoves on bamboo poles known as "dan". In the past, the peddlers selling Dandan noodles along the streets used a copper wok divided into two parts, one of which was used to cook noodles and the other to stew chicken or the upper pork legs. Nowadays, most of the Dandan noodles sold in places such as Chongqing, Chengdu and Zigong are served in restaurants but still retain the original flavor, especially the Dandan noodles offered in Chengdu.