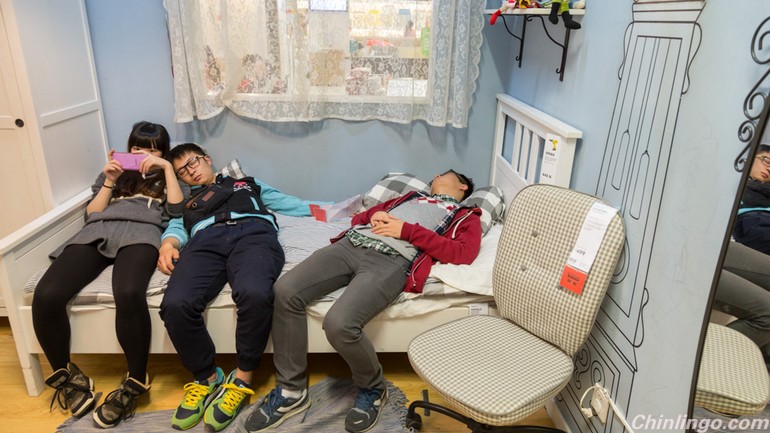 The Swedish furniture giant said Friday that Chinese shoppers are still welcome to crawl into their beds and lounge on their sofas after local media reported this week that IKEA issued a new napping policy.

State-run Beijing Youth Daily said on Monday that IKEA was informing customers who had prolonged naps that they were no longer allowed to sleep in the stores.

“I would like to emphasize here, there is no new rule to ban customers sleeping on IKEA products in IKEA stores,” a China-based spokeswoman for IKEA said. She added that IKEA encourages consumers to touch and try out the products.

The spokeswoman said that local media reported that there was a new rule without interviewing IKEA.

But the company does reserve the right to control problem-makers, the spokeswoman said. She said that “for the behaviors that may influence others’ shopping experience, we will politely stop it.” The spokeswoman did not respond to requests for comment on behavioral surveillance.

Chinese shoppers have long enjoyed snoozing in IKEA’s Malms and Fjells. Entire Chinese families, from grandpa to grandson, frequently head to big-box stores to play in the display rooms and then slide under the covers for a siesta.

Past company promotions have built on IKEA’s popularity as a hotbed for China’s nappers. Last December, the company launched a sleeping zone in Beijing’s International Airport, opening two mock living rooms and a children’s room where weary travelers could catch z’s between flight connections or amid delays.

IKEA has said that the phenomenon, a form of so-called “retailtainment,” is spontaneous and that the company “does nothing to prevent nor anything to attract sleepers.”

0 responses on "IKEA denies reports it has banned Chinese sleepers"