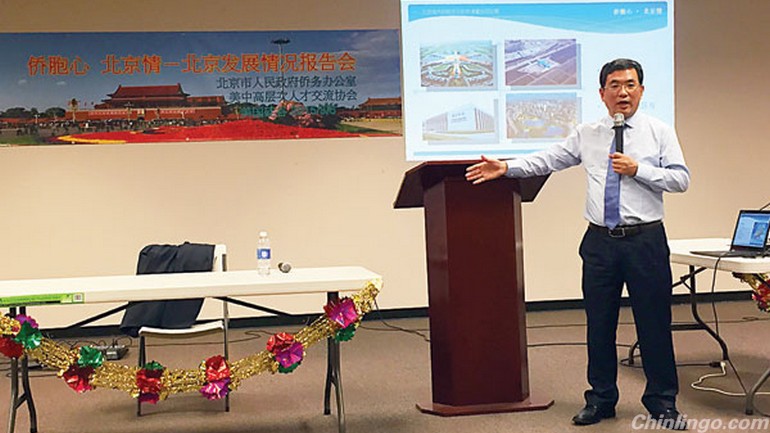 Chinese high-tech talents living in Silicon Valley are being called back to their homeland to launch their own startups and help boost the country's slowing economic growth.

China has been trying to woo high-tech expatriates back home for decades, and now it's in more urgent need than ever for overseas talent, as massive entrepreneurship and innovation are being encouraged to achieve a medium-to-high level of economic development, according to the National People's Congress of China.

As China's capital, Beijing has been strategically positioned as a science and technology innovation center, along with being a political, cultural and international exchange center as well, said Liu Chunfeng, director of the Overseas Chinese Affairs Office of Beijing, during a visit to Silicon Valley on March 6.

"The overseas Chinese professionals will play a very important role," Liu told the attendees at an event held by US-China Association of High-level Professionals. "We are here to express our sincerity and all of you are welcome to come back."

Among the attendees was Celia Chao, an engineer in laser diagnostics, a technology that can be used to detect air pollutants. She attended the event in the hopes of learning more about policies for overseas Chinese launching startups in China.

She said her husband has already returned to China, preparing for their own startup and she is leaving to join him soon.

"It's a decision after comprehensive consideration," said Chao, who graduated from Stanford University with a PhD in laser diagnostics after earning a master's degree from China's Tsinghua University in 2007.

Air pollution has become a serious public concern in China, but its technologies in this area are not mature and the instruments are mostly purchased from overseas companies, she said.

"Since we have this technology, we hope to bring it back and develop our own sensor instruments," said Chao. Their products are expected to provide advanced measuring methods, so the findings can be used by energy- or environment-related data bases.

To attract more overseas Chinese professionals to return home, major innovation projects are underway in Beijing, such as the 10-square-kilometer Future Science & Technology Park, which is targeted to lead China's applied science and technology and innovative entrepreneurship, as well as Zhongguancun Science & Technology Zone and 16 high-tech parks, covering a total of 488 square kilometers across the city.

Zhongguancun, China's "Silicon Valley", has developed from an electronics products market in the 1980s to a technology hub today. It has witnessed the growth of notable companies such as Stone Group, Founder Group and Lenovo Group.

Zhongguancun has become Beijing and China's "hotspot" for independent innovation and emerging industries. The total revenue of the enterprises in Zhongguancun has steadily increased to more than $500 billion in 2013 from $1.4 billion in 1988.

Beijing has become the first choice for overseas Chinese who want to start up their own enterprises in China, according to Liu.