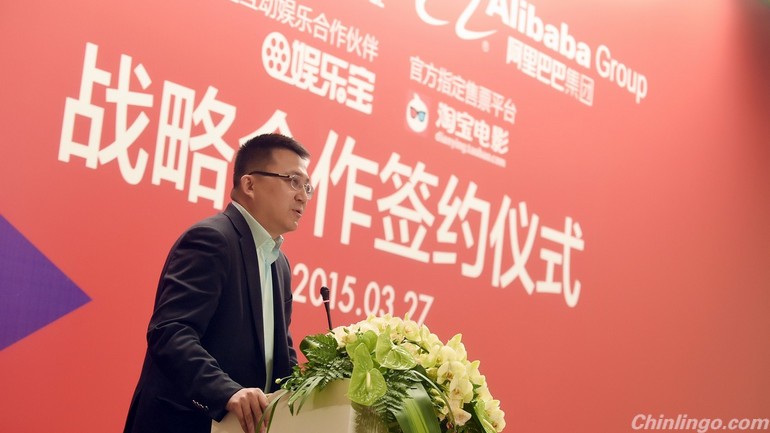 China's Alibaba has signed a strategic partnership deal with the Shanghai International Film Festival, the latest step in the e-commerce giant's bid to boost its entertainment presence.

Alibaba spent over $3 billion in the entertainment industry last year, and the cash-rich company went window-shopping for content and even potential acquisitions in Hollywood last year but has yet to make a major move there.

Alibaba founder and executive chairman Jack Ma has ambitions to become a major player internationally and described Alibaba as "the biggest entertainment company in the world."

The deal aims to integrate the platform advantages of Alibaba to assist newcomers in the industries, support interactions with film enthusiasts and explore the future of the film industry, said Ding Li, deputy general manager of the Shanghai International Film Festival, at a launch event at the China Art Museum.

"The festival will become a unique international event that fuses together two strong advantages, possessing the DNA of the Internet, providing the ultimate experience, exploring the future of the industry and gradually cultivating the industry’s new and powerful energy," Li said.

"This partnership will further utilize the platform advantages provided by Alibaba, exploring cooperation with the festival, creating value for users and providing the industry with more possibilities in the future," said Liu Chunning, vice president of Alibaba and president of Alibaba’s digital and entertainment business.

When Yulebao launched last year, it broke records for investment as hundreds of thousands of investors poured money into the fund.

Liu said that Yulebao had raised $53 million and invested in 12 blockbuster films in 2014, which together had a box-office take of $480 million, or nearly 10 percent of Chinese box office last year. In the coming 12 months, Yulebao plans to invest up to $240 million in films.

Last month, Yulebao said it would invest $16 million in Jackie Chan's Yaolai film and TV company over the next three years.

The deal is also a sign of the growth of the film festival circuit in China, as Shanghai, running June 13-21, competes with the growing presence of the Beijing International Film Festival, which takes place in April.

The Shanghai media authority chief, Hu, said his attendance at the event showed his liking for the integration of the Internet and the festival.

"Our cultural sector is facing historical development opportunities and a period of great prosperity, and the impact that new media has had on the traditional film industry is especially revolutionary," said Hu.