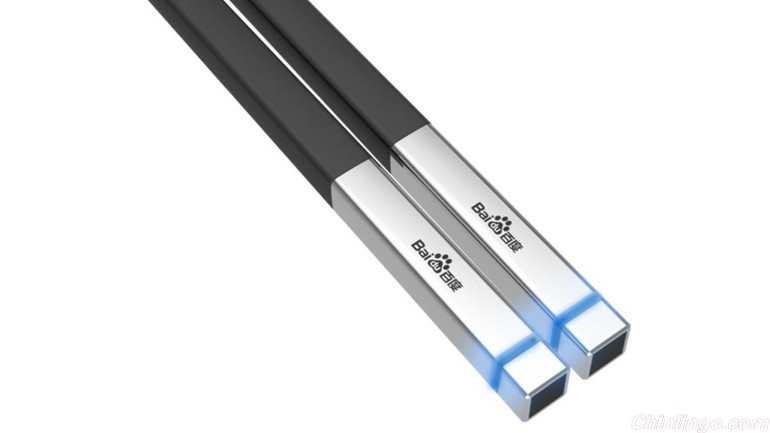 From recycled cooking oil to fox meat and chemicals, a litany of food scandals has turned Chinese diners' stomachs, but a new "smart chopsticks" concept by search engine Baidu could be the answer.

The device, which the company says can tell consumers whether their meal is safe to eat, was born of an April Fool video, a spokesman said on Thursday.

Baidu at the time had no intention of actually pursuing the idea, a spokesman said. "But it generated a lot of excitement both internally and externally."

The latest stage of development was revealed this week, with a video released by the company showing a user placing the electronic chopsticks in three cups of cooking oil. Sensors detect the oil's temperature and judge its fitness for consumption, with the findings displayed on a smartphone app.

The chopsticks flash a red light when cooking oil has a higher than 25% level of total polar materials, an indicator of freshness, the spokesman said.

Poor food safety is a major concern in China. In 2008, in one of the country's worst food scandals, the industrial chemical melamine was illegally added to dairy products, killing six children and making 300,000 people ill.

Of particular concern is "gutter oil"-cooking oil illegally made by reprocessing waste oil or by dredging up leftovers from restaurants and marketing it as new.

Last year health authorities launched a crackdown on the use and manufacture of the oil, with more than 100 people arrested and 20 imprisoned-two for life – as part of the campaign.

It is not clear whether the smart chopsticks will go into commercial production. The company had made only a limited run of prototypes, the spokesman said, and no release date or price had been set.

China's social media users lauded the innovation, but lamented the need for the device in the first place. "Is it really a good thing that they invented these?" said one user. "Can we still enjoy our food?"

Another posted: "If I carried these chopsticks around with me everywhere, I think I'd die of hunger."