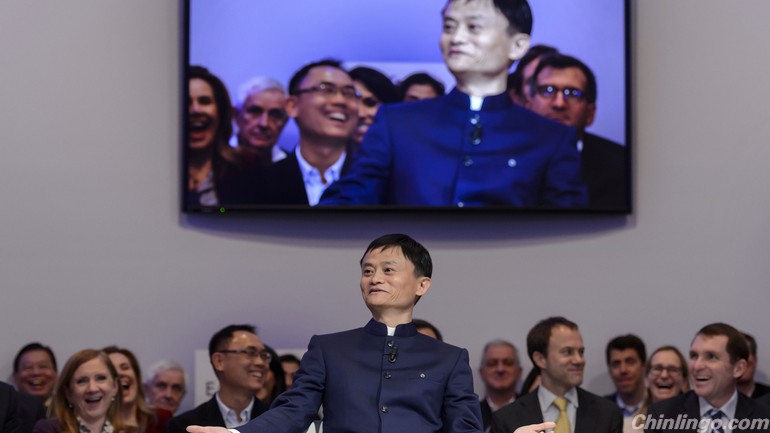 Alibaba, often referred to as China's answer to eBay and Amazon, now has 100 million visitors every day, said Ma at this year's World Economic Forum in Davos.

Ma was interviewed by Charlie Rose, and revealed a unique insight into the story behind his success.

1. "Beer" was the first word that Jack Ma searched for on the internet

Back in 1995 Ma made his first trip to the US and used the internet for the first time. After searching for "beer", he saw that no results came up relating to China. When he then searched for "China" and still saw no results, he decided to set up a Chinese website – the seed for Alibaba had been sown.

2. Jack Ma applied to study at Harvard 10 times and was rejected each time

Ma said he has had to deal with rejection many times in his life: He failed the entry exams for colleges in China three times and was also rejected for many jobs in China, including one at KFC.

The billionaire said he was turned down by the prestigious Harvard 10 times after applying, in reply Charlie Rose quipped "they're sorry now".

Forest Gump "never gives up" and believes in what he is doing, said Ma. He also quoted the phrase "Life is like a box of chocolates because you never know what you're going to get", adding that he could never have foreseen that he would end up at Davos talking about his success.

Limited resources meant it was difficult to learn English when Ma was younger. However, he found that he could learn the language by giving tourists free tours around his hometown of Hangzhou- something that he did during his teenage years every morning for nine years. Ma said that the tourists "opened my mind" because everything they said and did was so different to what he had been taught at school and by his parents.

Jack Ma's Chinese name is Ma Yun; he was given the name Jack by a tourist who later became a pen-friend. She struggled with his Chinese name and asked if she could call him Jack, because both her husband and father were also called Jack.

After being seen in Hollywood, Ma admitted that he's interested in making movies for Chinese young people.

He said that Hollywood has inspired him because in American films the heroes always start off down on their luck before reaching success, but in Chinese films all the heroes end up dead – Ma joked that this is why Chinese people don't aspire to be heroes. Ma also said that he enjoys reading and writing Kung Fu novels.

7. "Be in love with the Government… but don't marry them," said Jack Ma.

Ma described his relationship with the Chinese government as "very interesting" and said that at the beginning of starting Alibaba he told employees to be "in love with the Government, but don't marry them".

He said that he has never taken any money from the Chinese Government or Chinese banks.

Ma said that Tai Chi is a philosophy about how you balance and he applies it to his professional and business life, using it to draw inspiration about how to compete in the market.

9. Jack Ma named his company Alibaba because it's a globally known story

Ma simply wanted his company to have a global and interesting name, and realised that Alibaba is a story known across the world.  As an added bonus, Ma said that because it begins with A, it also appears top of lists.