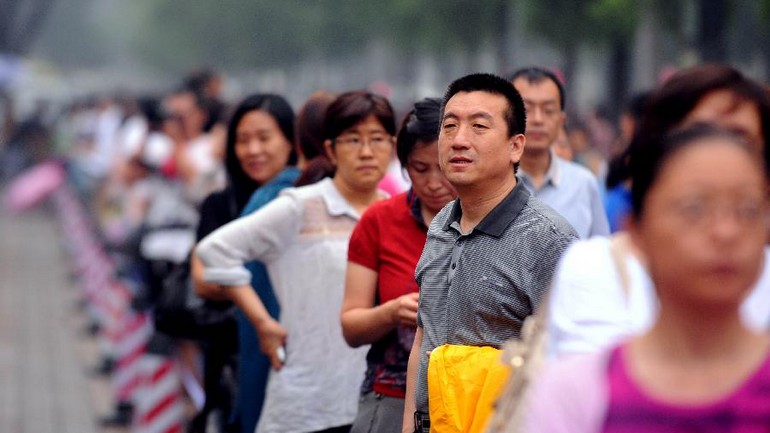 The  way some Chinese parents shower love on their grown-up children can
be  smothering, but from an outsider's perspective it may look like a
black  comedy eliciting laughs and tears in equal measure. When you spot
a  Mickey Mouse actor at a public recreation area, who do you think is
inside the costume? A child, perhaps? No, it's an adult because the
figure is much taller and moves about with energy. Never in my wildest
imagination would I say an elderly woman.

But Yang Zhiqiao is 75 and retired. She dons the Mickey Mouse costume
in Luoyang, Henan province, to earn some pocket money from passersby,
which she saves for her son. "My son is 40 and is still single. I don't
want to be a burden to him. I want to help him financially so he can
get  a wife," the Henan native says.

According to an unrelated news story, parents in a Beijing suburb are
getting up at 5 am each day and standing in line for the shuttle buses.
The early birds have developed this habit not for themselves, but for
their grownup children, who work in downtown Beijing. The youngsters
have to spend four or five hours each day commuting and their parents
chip in by waiting in line for them so they can squeeze in an extra
half-hour's sleep.

These two examples are among the more exotic things Chinese parents  do
for their children, but they are a perfect reminder of the  generational
ties that bind a Chinese family. The parental sacrifice is
traditionally embodied in a type of melodrama in which the mother, in a
desperate attempt to find money for food or school tuition for her
children, starts to prostitute herself. This secret is inadvertently
discovered by one of the children, who feels ashamed and blames the
mother. In the end, the truth dawns on him and a feeling of gratitude
gushes out of his heart.

There are countless versions of this tale in Chinese cinema or other popular art forms from the past century.

Is it an equivalent of a mother in the United States who forsakes her
career and turns into a soccer mom? Or is it sacrilegious to make this
cultural comparison? Parents everywhere love their children, but the
manifestation of that love can vary from culture to culture. What is
considered acceptable in one country might be perceived as outrageous
mollycoddling in another.

When I first went to the United States, I was flabbergasted to find
that parents would charge their college-age children for the phone calls
they make while at home on holiday. I guess that situation no longer
exists as now each one is equipped with a mobile phone and youngsters do
not need to "borrow" their parents' handset. But no matter whose phone
you use, you are supposed to pay your own bills, as is demonstrated in
the HBO TV series Girls, in which Lena Durham's character, a recent
college graduate, is kicked off the cellphone family plan by her  parents.

Chinese parents' overindulgence of their children goes beyond
the "little emperor" phenomenon, but it is exacerbated by it. Parents
harbor a desire to pass on what they have to their children, be it
wealth or social status. It's somewhat like an aristocrat passing a
title to the younger generation. And some will resort to corruption to
ensure that their children enjoy the ill-gotten fruits of their parents'
positioning or work. This may be illegal but in many minds it is not
unethical, at least not as unethical as squandering money on trophy
wives or concubines.

There is no one right form of parents-children dynamics. What's
over-protection in one culture may be the norm in another. And these
things evolve with time as well. While US parents are obliged to raise
their children to the age of 18 and see them through college, their
Chinese equivalents take it upon themselves to take care of further
needs, which include buying an apartment, finding a spouse and taking
care of the grandchildren. That's why the 75-year-old Henan woman took
on the ad-hoc job of a street performer, a notion possibly alien to her
for most of her life. She did this so she could afford a
daughter-in-law. She must have thought it was her responsibility to
ensure her son was financially capable of getting married.

What if there is no financial issue involved and her son simply does
not want to walk down the aisle with anyone? Any Chinese beyond the age
of 25 who is not married or does not have a regular date may face the
experience of constant nagging from their parents.

In the old days, you were not supposed to have a date while in  college
because that would interfere with your study. But once out of  college
you were supposed to find the right person and start a family,  possibly
within a year or two.

For whatever reasons young people in China are pushing back the age  of
marriage either out of choice or out of necessity. Some want to
experiment with more possibilities, while others are simply intimidated
by the urban dating scene or are holding out for the right person to
appear. The pressure these people's parents apply can be suffocating.
And in turn, their parents have to field nonstop hectoring from their
friends and neighbors: "Is your son or daughter married yet? When is he
or she getting married?"

The same pestering is repeated from the time one is married to when  an
heir is born. "Does your son or daughter have a child yet? Isn't he  or
she beyond the best age to give birth?" To be a grandparent is a big
deal in China. It is considered the ultimate familial bliss to live
under one roof with three or four generations, even if only during the
New Year holidays.

The escalation of generational conflict reaches a crescendo when a
grandchild is produced and the traditional way of child-rearing clashes
with the new way. Yes, you can expect parents to be unpaid baby
sitters,  but the implicit cost is that you give up your method of
bringing up a  baby or the part of it that does not conform to your old
folks' beliefs.  Of course, every family is different and not every
parent is  domineering to the point of turning love into torment. Some
move to  Hainan, China's equivalent of Florida in the US, or go on
extended tours  around the country or the world. But, so far, they are
still a  minority.

And one should not place all the blame on the old generation. Many
youngsters actually expect or even welcome such treatment from their
parents. They develop a sense of entitlement when their parents pay for
their big-ticket purchases and go on scouting expeditions for potential
in-laws.

Do you think standing in line in the wee hours for their children's
commute is ridiculous? Wait until you hear of old folks who get into
matchmaking games in public parks not for themselves, mind you, but for
their children. I wonder what will come next.

In the old days, parents would even hide outside the bridal chamber
and listen to what was going on between the newlyweds. As soon as they
got a chance, they would sneak in and check the bed to see if there was
any blood. They had to make sure the bride was a virgin.

Maybe it's a bit too cruel to mock such behavior. It's more cultural
than moral. If you step back and look at the whole picture, all the
things described above were done because parents cared for their
children. There is the art of letting go that is largely elusive to the
old generation. If you tie your children too close to you, they are not
going to fly very high.