No car, no house, no problem? The ups and downs of transnational marriages in China 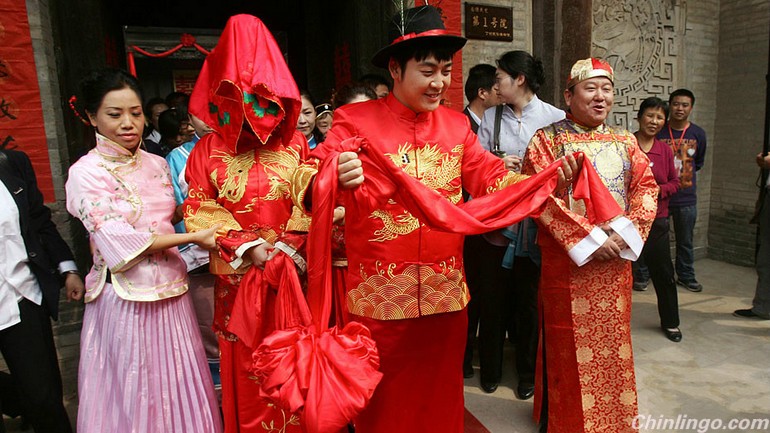 Editor’s note: This translated article is another post in what appears to be a continuing trend of trying to quantify what makes marriages between Chinese people and foreigners work. The article focuses on Jiangsu where transnational marriages have increased dramatically in the past few years and draws on personal accounts from three couples.

How much money does an average man spend on his wife to get married? Most people in China believe that having a lavish wedding is a basic right. They also assume that a groom would have to spend even more money when marrying a foreign bride. However, this is not always the case. A French girl who recently married a Chinese man told him, “I do not want a house or a car; I just want you to love me.” They got married by simply registering at their district office and receiving their “red book” for marriage registration. For the French girl, this was enough.

Emilie and Xiao Xie: No Car, No House? No Problem

While Chinese are often shy about approaching a potential date, foreigners are more direct when they fall in love.

Yesterday morning, we spoke to a recently married couple: a 26-year-old French woman and a man from Suzhou. The French woman’s name is Emilie and she is two years older than her Chinese partner Xiao Xie. It was Emilie, in fact, who decided to pursue her Chinese husband. “Last March, I had in internship in Suzhou at his office. I noticed him right away. He was so handsome. I actually secretly took a photo of him,” said Emilie. She said she was very excited that she had been able to pursue him and now marry him.

“She studied at Fudan over the summer. She speaks seven languages. She is an absolute genius,” said her husband Xiao Xie with a look of pride on his face.

“I thought he was so handsome. After the first time I saw him I would try to sneak over to look at him during work. I really wanted to talk to him,” Emilie turned and looked and her husband with a look of love on her face. At the time, Xiao Xie did not feel the same way about her. “At first I just thought that she was too unfamiliar, however once we starting chatting a bit I realized that I had very warm feelings towards this foreign girl.” However, he was still overwhelmed by Emilie’s directness.

“We went out to barbecue together after about four months of knowing each other. After we had dinner, she declared her feelings for me.” Here, they both laughed. Xiao Xie put his arm around his wife and kissed her. “Generally, it is usually the man who declares his feelings first, but I could not wait. When I graduated I would have gone back to France. But, I wanted to settle down with him. If I had been unsuccessful I probably would not have come back to China.”

Xiao Xie’s father said that he is “very satisfied” with his foreign daughter-in-law and that “communication is absolutely no problem.” When it comes to cultural differences Mr. Xie said: “They live together alone and we have dinner all together once a week. It is very good. Honestly, if he had married a Chinese girl it would have been the same: there are so few young people that want to live with their parents nowadays. So this French girl is a really solid match!”

Mr. Xie mainly thinks Emilie is “solid” because she was willing to marry Xiao Xie for love rather than money. “In France, young people are together even when there is no house and no car. But, we work together and work hard and we love each other,” said Emilie in a serious tone.

“When she married me, she did not want a car or a house. She only wanted a cat. And then later have children. When I heard this, I started to cry,” said Xiao Xie. Emilie had moved him and surprised him at the same time. “I think that with her, I will become a better person,” he said.

Ms. Miao and Mr. Lee: Korean mother-in-laws are not monsters!

Ms. Miao met Mr. Lee from Korea when she was working as a Chinese teacher. Mr. Lee was her student. Ms. Miao was originally from Wuxi and is a tall, thin and athletic woman.

“He was sent to China in 2012 on a work assignment and needed to learn Chinese. I worked part-time as his Chinese tutor. When I met with him, I realized that he was very educated and easy to talk to,” said Ms. Miao. Ms. Miao had studied Korean in undergrad, which helped her find translation work. It also helped her find a handsome international lover.

Mr. Lee was very attentive towards Ms. Miao and was very accepting of her. Sometimes, he would tease her while she was teaching him. “He would pretend to not understand Chinese words to annoy me, so I would have to teach him in Korean.”

When asked about challenges within transnational marriages, Ms. Miao admitted, “I was actually very worried before we got our marriage license because I heard that Korean mother-in-laws were particularly demanding. Last June, we went to South Korea and met his parents and stayed at his house for a while. His family was very welcoming and took care of me. After that, I decided to marry him.”

Marriage is normally very complicated. Transnational marriages are even more so. Every marriage faces small issues that often become tangled. Last year, 207 transnational couples filed for divorce. 71 percent of couples who filed for divorce did so because they had become “estranged.” Other reasons included “separation”, “family disputes”, “adultery”, “children’s education” and “lack of understanding before marriage.”

Xiao Lin is a girl from Nanjing with a fiery disposition. She and her American husband David often argued. “She always spoke to me in a commanding tone making me do this, do that. I now wonder why she never said thank you to me.” Xiao Lin saw his need for thanks as unnecessary. “When husbands and wives are too polite to each other, it is like they are strangers,” she said in her defense.

“By communicating with two divorcing parties, we have learned that the main reasons for divorce usually stem from differences in cultural traditions, values, habits etc. When two parties are not compatible with each other then their marriage is prone to conflict. They are not able to communicate well enough to solve these conflicts,” said a staff member from the foreign marriage registration center. Women who long for a foreign husband must be psychologically prepared for the challenges of a transnational marriage.

What kind of foreigner takes a Chinese spouse?

The Jiangsu Province Foreign Marriage Registration Center reported that as of November of last year, the office has provided a marriage license to 1439 couples. Foreigners from 66 different countries have married Jiangsu natives including those from Korea, Japan and the United States. Last year, for the first time, Jiangsu residents married foreigners from Tunisia, Burundi and Guyana. The three countries all had athletes who traveled to Nanjing to participate in last year’s Youth Olympic Games. The president of Burundi, Pierre Nkurunziza, attended the opening ceremony of the games. “The closer the economic and cultural exchanges are between two countries, the higher the likelihood of transnational marriages between men and women of those countries.”

There are often age gaps in transnational marriages. The age gap is mainly up to 15 years. In the first half of the year, the largest age gap was 38 years. A Japanese man married a woman from Nantong who was 38 years his junior. In the second half of the year, the record was set by a man from the United States who married a woman from Suqian 53 years younger than him.

The foreign marriage registration center reported that 682 or 47.4 percent of “foreign husbands” have an undergraduate degree. 248 or 17.2 percent have their graduate degrees. Girls from Jiangsu who marry foreign husbands are quite educated as well. 794 of them or 55.2 percent have a college degree or higher. This shows that education is an important factor in creating a “perfect match” between a foreigner and a Chinese spouse. Education helps narrow cultural gaps on both sides.

0 responses on "No car, no house, no problem? The ups and downs of transnational marriages in China"