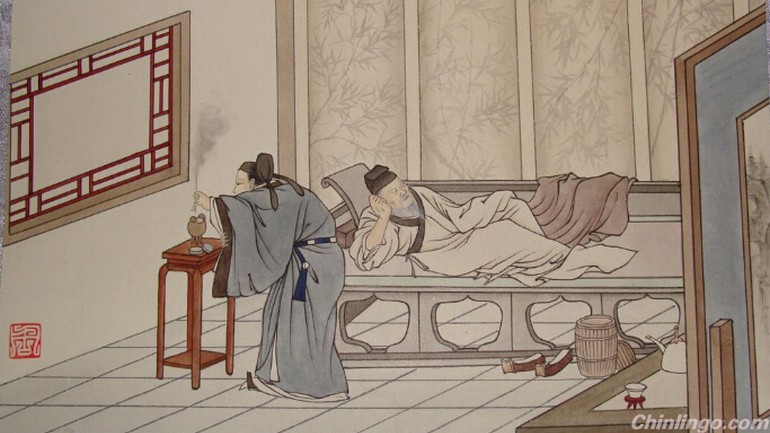 Qianlou lived during the Period of the Northern and Southern Dynasties, in
the state of Qi. He rose to office and served as the governor of Jianling for
only ten days, when for no apparent reason, as he worked in the capital, he
broke out in a cold sweat, and his heart palpitated, and would not
stop.

"Do you suppose there is a problem at home?" he wondered.

Being devoted son, the duties at home always sat foremost on his mind.
Immediately he resigned his office and hurried home.

After arriving he discovered that as he had feared, his father had suddenly
been stricken with a strange illness that the doctors could not diagnose.

"If you want to know your father's prognosis and chances of recovering, you
must test his stool. If it is sweet-tasting, then the malady is serious, and
chronic. If it tastes bitter, then the problem is acute, and short-term," said
the doctor.

Lacking any sophisticated testing procedure, the physician advised Yu Qianlou
that he would have to taste the old man's excrement to determine whether he
could quickly recover from the disease.

Qianlou promptly sampled the stool and to his dismay, found it
sweet-tasting.

That night, in desperation, he lit a stick of incense and knelt before the
family alter, and prayed to Polaris, the Pole Star.

"If my father an recover his health, I will offer up my life in exchange for
his. Take me and let him live," he vowed.

After news of Yu Qianlou's courageous oath got around, the family and
neighbors all praised him as a truly extraordinary, filial
child.