Lying down on the ice to fetch carp for his stepmother: Wang Xiang 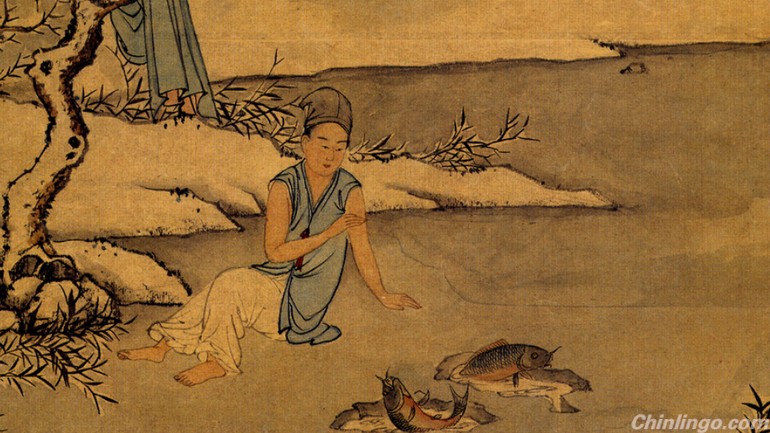 During the Jin Dynasty, a young boy named Wang Xiang (Wang the Lucky) lost
his mother to illness.

His father took another wife so that the boy would have maternal care. His
stepmother, however, was a bad-tempered, evil-natured woman, who took a dislike
to her stepson, and often berated him in front of his father.

This went on incessantly, and eventually, she managed to turn Lucky Wang's
father against the boy. Despite this hardship, Lucky Wang remained devoted in
his filial regard for them
both.

One winter it was unusually cold, and snow fell for many days. The snow piled
up on all sides of the house, and the small creek nearby froze solid with ice.

The severe weather forced the family indoors, and all the animals found
shelter wherever they could. The world outdoors was a broad blanket of white.
Wang Xiang's stepmother took sick. She craved medicine, and her thoughts fixed
on the image of fresh fish.

She demanded fresh carp as medicine to cure her illness. As it was still
snowing, and everywhere the rivers had long since frozen solid, where could
fresh fish be found? Lucky Wang was a dutiful son, however, and could not bear
seeing his parents unhappy.

He forced his way out into the cold and walked to the creek side to see what
he could do. The snow was piled deep, and the boy shivered in the cold.

He looked and looked, but found no access to running water. Tired and
disappointed, he sat down on the ice and lamented his failure to find fish to
cure his mother.

Having no way to solve the problem, he simply let his tears flow. An idea
came to him as he cried, and having no recourse, in his desperation, he removed
his coat and shirt, and lay down on the ice amid his hot tears.

The more he cried, the more upset he got. The more upset he got, the more his
tears flowed. Before long, his body heat and the apidly expanding puddle of
tears melted a hole in the ice. Two carp that had been frozen into the
river-water suddenly leaped up out of the crack in the ice and flopped onto the
bank. Amazed and delighted, Wang Xiang scooped them up and carried them home to
his ailing mother.

Seeing the two live fish, Wang Xiang's stepmother felt thoroughly ashamed of
her selfishness. Afterwards, she changed her attitude towards her stepson, and
became a kind and caring person.

Many people said that Wang Xiang's response came from his sincere filial
devotion. His noble attitude moved Nature into giving him a
reward.

0 responses on "Lying down on the ice to fetch carp for his stepmother: Wang Xiang "