Crying By the Grave When Thunder Rolled: Wang Pu 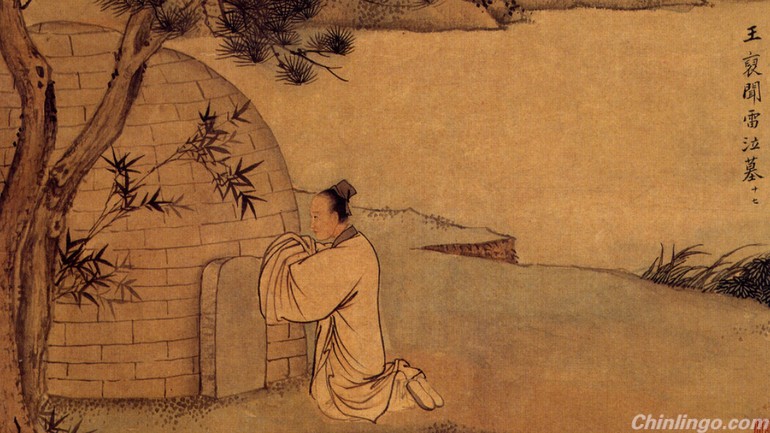 Wang Pu (Wang Weiyuan) was a filial son who lived during the Three Kingdoms
Period. His mother dreaded the sound of thunder-claps. Every time the sky filled
with dark clouds and rain was on the way, Wang Pu would run to his mother's side
to comfort her and to calm her fears. If her son was not at her side, the old
woman felt unbearable
alarm.

After his mother passed on, Wang Pu buried her in a neighboring graveyard.

Even though the old lady was no longer alive, every time a storm approached,
and it appeared that lightning was coming, he would run to the graveside and
kneel by his mother's tombstone with tears running down his cheeks.

"Don't cry Mother, your son is nearby!", he would call, just as if his mother
was alive. As long as the storm lasted, the man remained near the grave,
circling around it countless times, to protect his mother's spirits and keep her
from
fear.

Later when he taught school, every time he read a passage that mentioned the
emotion felt by devoted sons and daughters for their departed parents, Wang Pu's
own feelings would overflow, and he would cry with deep longing.

Seeing this behavior, his students would carefully remove any texts that
talked about the tender feelings of children for their parents.

Wang Pu always emphasized in his lessons the necessity of repaying the
kindness of one's parents while they are still alive. He was considered a model
of filial behavior, and his constant regard for his departed mother moved the
hearts of all those who witnessed
it.

0 responses on "Crying By the Grave When Thunder Rolled: Wang Pu "