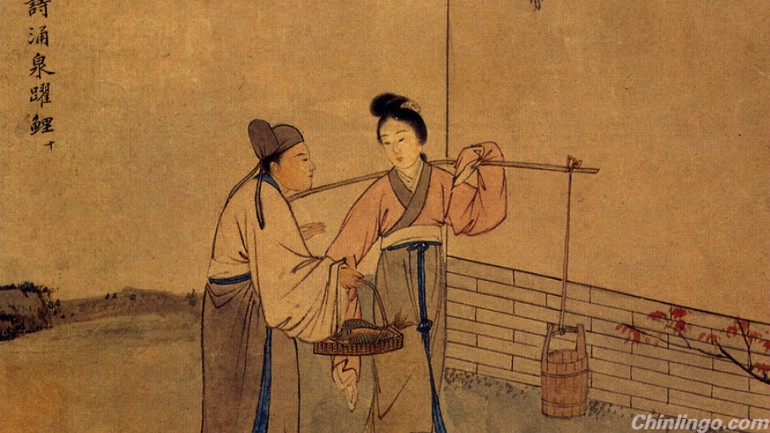 Jiang Shi was a man of Guanghan, Sichuan in the East Han Dynasty. He married
Madam Pang and the couple was pious.

Madam Pang often went to the riverside to fetch the Yangtze River water 6 to
7 li away from their home for her mother-in-law, which she liked to drink.

Her mother-in-law liked to eat fish, so the couple often cooked fish for her.

She didn't like to eat by herself, so they invited the old woman nearby to
eat with her together.

Once Madam Pang went to fetch water and came back later for strong wind.
Jiang Shi suspected she neglected his mother and drove her out.

Madam Pang lived in her neighbor's home, wove yarn diligently day and night
and asked her neighbor to send her savings to her mother-in-law.

Later her mother-in-law got to know she was driven out and ordered Jiang Shi
to invite her back.
其后，婆婆知道了庞氏被逐之事，令姜诗将其请回。

On the day when Madam Pang came back home, spring water spurted in the
courtyard suddenly and its taste was similar to that of the Yangtze River water.
Moreover, two carps jumped out from the water every
day.

Henceforth Madam Pang could offer these to her mother-in-law instead of going
a long way to the riverside.