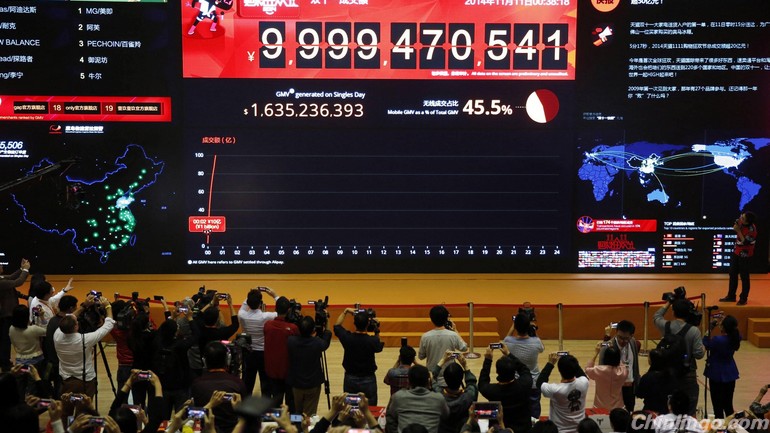 China's largest online retailer Alibaba has revealed that it has sold $2bn worth of products within the first hour of trading on "Singles' Day" – an annual event in the country that compares with the West's "Cyber Monday" or "Black Friday".

The group, which offers huge discounts on the day to boost overall sales, previously estimated that it would break previous records, but total sales haven't been unveiled yet.

"I bet the number is going to be scary," said Jack Ma, executive chairman of Alibaba this month.

Alibaba does not have much of a presence among US retail customers, but is a household name in China.

China's Singles' Day was created by Alibaba in 2009 to tap into a growing trend where mainland Chinese people without a partner would buy things for themselves, in a tongue-in-cheek protest over Valentine's day.

It was originally a marketing ploy to just bump up sales but it has now become a major annual event that rivals the West's Cyber Monday or Black Friday, the weekend after Thanksgiving which marks the start of the Christmas shopping period.

Alibaba, which handles more e-commerce than Amazon.com and eBay combined, is expected to post a revenue of about $2.7bn for the quarter-ended September, up some 52% from a previously reported $1.78bn a year ago.

Jack Ma's firm is expected to report a net profit of about $1.17bn for the September quarter, according to a Thomson Reuters SmartEstimate poll of 21 analysts.