LVMH is cannibalising itself in China 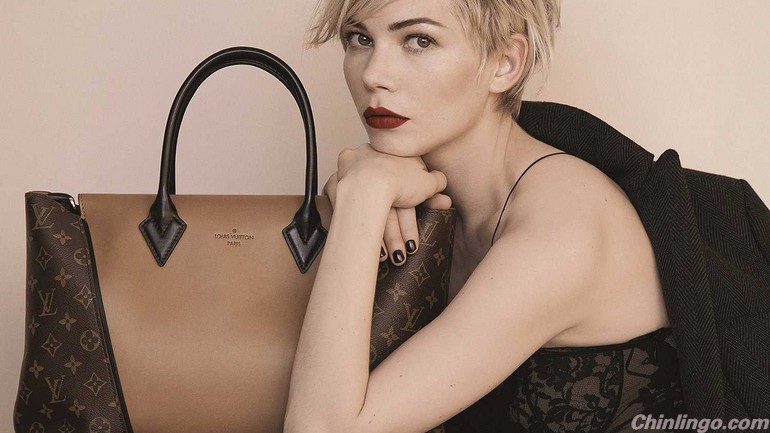 The makers of Louis Vuitton confirmed on its first quarter revenue analyst conference call today that it is trying to crack down on people buying luxury goods in bulk in Europe and then selling them on in China, in what it calls "the grey market."

"When you have soaring currencies and increasing price gaps on grey market, you see some market dilution. We've placed strict retail restrictions for the amount of products that people can buy," said Jean-Jacques Guiony, chief financial officer at LVMH on the conference call. "But, when you see someone in a store, you don't know whether they are buying handbags for themselves or to sell them onto the market in China. We are trying to make sure we are not competing with our own products in the China market but our actions are not entirely bullet proof."

Effectively, LVMH is worried it will involuntarily cannibalise its own sales. This is because if people are "successfully" buying its brands in bulk overseas and selling it at a discount in China, it will find itself trying to compete price-wise with the black marketers.

While the goods hold a hefty price tag anyway, import duties range from 10% to 25%, while that type of tax on luxury cosmetic products and alcohol can rise to 60%.

This is not to mention VAT being around 17%.

Although LVMH reported a huge 16% rise in revenue for the first quarter revenue of 2015, climbing to €8.3 billion, China is shaving away at its margins.

The revenue jump was not down to organic growth.

A weak euro against the dollar boosted LVMH sales and a strong performance from its key brand Louis Vuitton helped its "excellent start to the year" in Europe and the US.

On a like-for-like basis revenue growth rose 3%, compared to the same period in 2014. Until five years ago, LVMH used to report 10%-plus growth rates year after year. Those days are gone. The brand's revenue hasn't hit the double-digit growth rates for two years or more, if you don't count currency fluctuations.

But like most luxury brands, LVMH revealed that it is still being hit by China.

But this is still better than the 3-4% drop predicted by analysts: 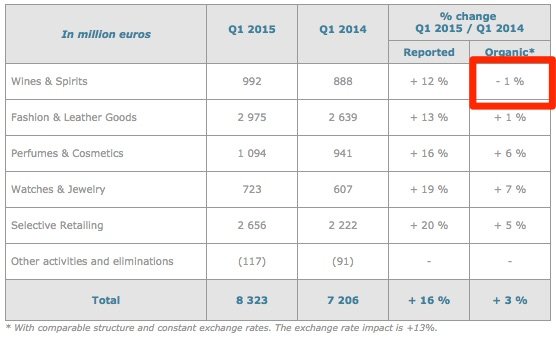 Since Chinese President Xi Jinping came to power two years ago, the country has cracked down on "gifting," the practice of offering very expensive gifts to company executives or people in power.

While it is a long-standing tradition in Asia, the practice has fallen under scrutiny because of a range of corruption cases filed against government officials and company executives.

GettyA model, bag detail, walks the runway during the Louis Vuitton show as part of the Paris Fashion Week Womenswear Fall/Winter 2015/2016 on March 11, 2015 in Paris, France.

Last month Business Insider detailed how luxury brands, especially Prada, were in trouble due to the slowdown in sales growth in China. The larger the company's exposure is to Asia, the worst trouble the company seems to be in.

Some brands like Chanel have already taken aggressive steps to buoy up sales. It adopted a new global pricing policy which meant it cut prices in China by 22% while also hiking up prices in Europe by 20%.

Prada neglected to follow the same route and instead cut prices in China but said it wouldn't increase prices in Europe in order to "protect local demand." It posted a 1% fall in revenue to £2.6 billion ($3.8 billion) for 2014 and a 28% plunge in profits.

LVMH said today on the analyst conference call that is it not interested in following in Chanel's footsteps.
"We do not think a unified pricing structure makes any sense for luxury brands," said LVMH's CFO Guiony. "The main reason is because it does not give flexibility for currency fluctuations.

"It's hard to know how price movements are affecting Chanel. It was pretty recent and they don't report their figures on a regular basis, so frankly I have no idea [how it's affecting the company's sales]. We've seen queues in front of Chanel stores in Hong Kong and China but you don't know if they were just there for the immediate discount.

"What we've learned from the past is that you don't act too quickly. Currencies fluctuate a lot and you don't want to be in a situation that you can't control."

While cutting prices seems a good option, to some, Barclays' analysts point out that it is still a risky route to take for a luxury brand for other reasons (emphasis ours):

"We continue to see a key risk here the soft luxury industry from price cuts as we highlighted in our note Price cuts a key risk for soft luxury (April 1st). While we expect some price realignment from Louis Vuitton, the magnitude of Chanel’s price adjustments may be tricky to replicate given the risk to alienate local demand in Europe in particular at the entry price point and potentially hurt brand equity in China."

Brand equity is a huge deal for luxury goods makers. Their items need to carry an air of exclusivity and decadence that the average shopper wouldn't be able to afford. This is how they are able to charges thousands of pounds for a sweater or $50,000 for a handbag.

Showing your wealth through by carrying around items of clothing is part of the parcel for the nouveau rich. If a brand is seen as too common, then the wealthy start spending thousands of pounds elsewhere.

Take a look at Michael Kors in the US. The American brand enjoyed a stunning rise in popularity in recent years thanks to its trendy handbags and watches. However, the relative affordability of its goods led to widespread popularity. This was the "kiss of death for trendy fashion brands, particularly those positioned in the up-market younger consumer sectors," according to industry expert Robin Lewis in his blog.

According to HSBC managing director Erwan Rambourg in his new book, "The Bling Dynasty: Why the Reign of Chinese Luxury Shoppers Has Only Just Begun," brands that become too accessible are less appealing to super rich buyers.

In fact, Louis Vuitton is already at risk in China of alienating its shoppers with price cuts because it is considered as a "brand for secretaries" by many wealthy Chinese.

Luckily though, according to a diagram made by Rambourg about the hierarchy of brands, LVMH's Berluti label is near the top.

Overall, LVMH's Fendi, Celine, Givenchy, Kenzo and Berluti brands, were up 13% in the first quarter this year at €2.98 billion.

0 responses on "LVMH is cannibalising itself in China"