China Headlines: To donate or not? — China struggles for more organ donations 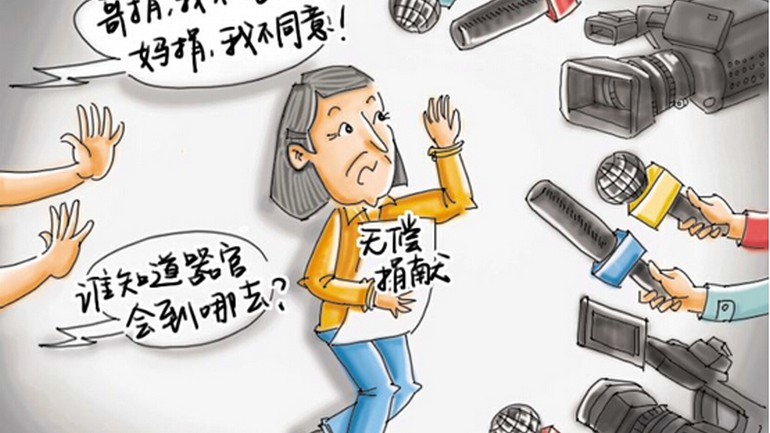 by Hu Longjiang and Liu Lu

His heart, lungs, liver and kidneys have been successfully
transplanted to five patients from Sichuan, Fujian and Hubei and they
are currently functioning well. His corneas have also been preserved for
those in need.

"He always liked to help others and he would like to do this
(donation)," said Yang's mother Zhang Zun'e, who decided to donate
Yang's body parts after the 39-year-old Sichuan man died in a car crash.

Yang's body will help at least seven people, according to Deng Shaoping, president of the Sichuan Provincial People's Hospital.

In China, many believe in the tradition of keeping the entire body
for the dead in order to help their reincarnation or enable them better
lives in the afterlife.

But as the nation progresses, organ donation has become a more
acceptable alternative with encouragement from the central government.

Despite the increase in donors, their is still a vast gap for supply and demand.

And the gap may continue to expand.

On January 1, China banned the harvesting of organs from executed prisoners, which was a major source of transplants.

"The donors are too few, and usually a patient has to wait for 1.5 to
3 years for a lung. Many died while waiting," said Chen Jingyu, a
member of the Chinese Society of Organ Transplantation.

Liu Deruo, a noted thoracic surgeon with the China-Japan
Friendship Hospital, said he last performed a lung transplant four
years ago simply because no lungs are available for the desperate
patients.

However, Huang Jiefu, head of a national human organ donation and
transplant committee, said the ban, aimed to preserve justice and human
right, would not aggravate the shortage of organs for transplant in the
long run.

"The more respect we pay to prisoners on death row, the more citizens will donate their organs," said Huang.

In 2014, voluntary donation from Chinese citizens became the major
source of transplant organs, accounting for 80 percent of all donated
organs, Huang added.

Huang said use of organs from executed prisoners was a "reluctant
option", which violates medical virtues and had long been criticized by
the international community.

The option has gradually been phased out since China set up a system
of voluntary donation in 2010, resulting in a final ban this year.

Government statistics show that about 300,000 patients each year need
organ transplants in China, while just more than 10,000 received such
operations.

While lack of organs is the primary reason, Huang says the high cost
paid by recipients of donated organs for the transplant surgery is
another contributor for the disparity.

From 2010 to the end of January, a total of 3,326 people donated
their organs after death, an average of less than 900 donors every year.
The rate is quite low rate considering the 6 million deaths each year
in China.

Instead of traditions such as keeping the deceased's body intact,
poor administrative management is often the first target of blame for
the low donation rate, said Huang.

A poll conducted by Huang's committee showed more than 40 percent of
the surveyed were not sure whether to donate organs or not. The found
part of the reason people are unsure, Huang says, is because they don't
know who or how the organs will be used.

"So it is vital to establish an open and transparent organ
distribution system, under which every organ can be traced back to the
exact donors," he said.

China has developed an automatic organ distribution and sharing
system, which sequences the patients according to the severity of
illness and other internationally recognized factors.

The system can effectively exclude personal interference, if, it is well implemented, according to Huang

Some patients and their family members said they also worry about
whether the hospital will take into consideration organ donor status
when deciding whether or not to go all out to save a patient.

Huang said that's impossible, as every patient must be confirmed as
dead before any of their body parts are taken away. Currently the dead
can be classified as "heart dead," "brain dead" and "heart and brain
dead."

But some involved in the transplant circle suggest introducing a
third-party medical assessor to ensure the patient's death and avoid
possible conflict between the family members and medical staff.

WHAT DO THE DONORS GET?

Currently, there are no subsidies to help pay for burial or cremation of organ donors in China.

Every single family interviewed by Xinhua reporters said the fact
that organ donors don't even have funeral expenses paid for makes them
feel pathetic.

Some families said they hoped the government would help cover more of
the medical expenses of the dead donors. Last year, the central
government allocated 840,000 yuan (about 137,000 U.S. dollars) to help
pay the treatment fee for 1,200 donors, that's too little, said Gao
Xinpu with the China Organ Donation Administrative Center.

Huang and Gao said subsidies for the donors' families are reasonable
human comfort and aid, and that subsidies are never equal to trading of
organs, which is illegal in China.

Some also proposed to build a public cemetery or monument to memorize these donors.

The government is also asked to provide more professional assistance during the patient donation.

Generally, when a doctor learns that a patient is willing to donate
organs, he or she should immediately inform a special coordinator from
the Red Cross Society of China, who will be responsible for
communicating with the donor's family and dealing with the legal issues
concerning the donation.

Meanwhile, one or more medical coordinators from the Organ
Procurement Organization of the Chinese Hospital Association will
communicate with doctors and assess the condition of the patient's
organs.

China has only 169 registered special coordinators and 378 medical
coordinators. "The number is far from enough especially when China's
organ donors are increasing rapidly," said Gao.

With the ban on organs from the executed prisoners, the coordinators'
task will become heavier as more donations need their participation,
Gao said.

Gao revealed that the Chinese government is training another 660 coordinators and they will go to work soon.

0 responses on "China Headlines: To donate or not? -- China struggles for more organ donations"