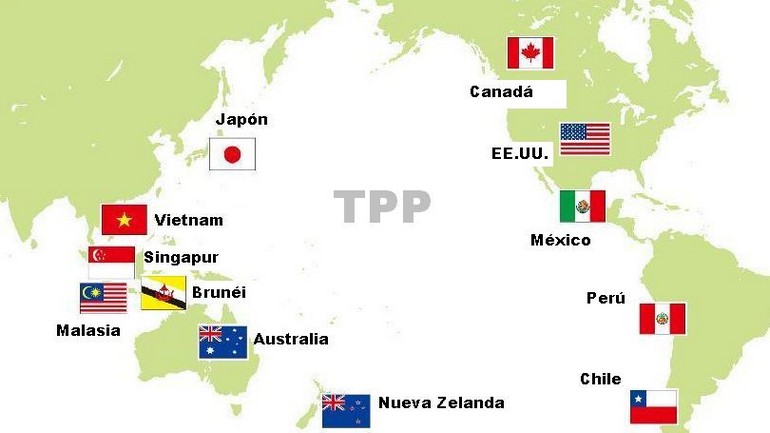 We hear a lot of talk about the TPP? So what is it, and how does it affect China?

Together, these countries account for almost 40 percent of global
output and about a third of global trade, making it one of the largest
free trade areas in the world. Negotiations were originally slated to be
completed this month, but contested issues, primarily in the area of
agriculture, remain unresolved.

As a “21st century trade agreement,” the TPP encapsulates a wide
range of issues. It is reported that only five of its 29 chapters relate
to traditional trade matters. Other aspects range from environmental
protection to labor unions and intellectual property rights.

In the simplest sense, TPP members would enjoy lower tariffs and
simplified customs procedures. China would miss out on these benefits if
it does not enter into the agreement.

Yet a bigger concern lies with rules of origin. It is likely that TPP
countries will offer lower tax rates only for products using materials
imported from member countries. The most prominent example of this is
the US’s “yarn-forward rule of origin,” applied under North American
Free Trade Agreement. The rule stipulates that all contents in a garment
from the yarn stage forward must be made in one of parties to the
agreement in order to be eligible for tariff benefits. If the same rule
were applied to the TPP, non-members such as China would be punished.
China’s textiles and garment sectors stand to lose the most. Under a
worst-case scenario, TPP members would refrain from engaging China in
the textiles manufacturing process altogether.

If the “yarn-forward rule” were applied, Vietnam would benefit the
most in Asia. The Peterson Institute forecasts that Vietnam by 2025
would be 14 percent richer than if it stayed out of the TPP, assuming
China does not join. In fact, Vietnam could potentially usurp China’s
role as a global textiles hub. Some Chinese manufacturers, including
listed ones, are already considering relocating to Vietnam.

External factors are more forceful in driving China’s reforms than
domestic factors. The China (Shanghai) Pilot Free Trade Zone is one
example of externally driven change. The zone is highly likely a
response to deepening TPP negotiations, the most telltale sign being the
speed of its setup.

Japan’s intention to enter TPP talks earlier this year also was a
potential trigger because that country has huge economic and political
significance to China. Japan is China’s fifth-largest trading partner
and third-largest source of foreign direct investment.

Looking one step ahead, Japan’s joining the TPP would hasten South
Korea’s interest in joining. Japan is also the first country to join the
TPP that does not have an existing free-trade agreement with the US.
This implies there is potential for even more countries to enter
negotiations and build up a significant critical mass that would harm
China’s interests if it chooses not to join.

Due to inherent differences in economic systems, China has in the
past refused to conform to the rules of Western institutions on key
international issues. Likewise, the principles of TPP are ideologically
different from China’s existing economic wiring.

Yet with so much at stake, China might eventually soften its stance
and consider making some accommodations. However, it is technically
inconceivable for China to overhaul its systems overnight. That is why
China has probably devised the Shanghai free trade zone as a gesture of
its willingness to converge with TPP principles.

Indeed, we are able to identify similarities between the new
free-trade zone and the TPP. These include tariff reductions, a
“negative list” system for foreign investment and, most recently, the
introduction of an e-commerce platform that embraces the principles of
consumer protection and intellectual property rights protection.

Looking ahead, developments in the zone will further emulate the
requirements of the TPP. The speed of TPP negotiations will likely
expedite China’s pace of reforms within its new trade zone and hasten
plans to replicate the zone across the country.

Another strategy China is adopting in response to the formation of
the TPP relates to the Regional Comprehensive Economic Partnership.

Led by the Association of Southeast Asian Nations, the partnership
currently has 16 members and the potential to become the largest trading
bloc in the world, accounting for some 40 percent of global trade.
Negotiations on the partnership are slated to be completed by 2015. At
this stage, this is probably China’s strongest counterweight against the
TPP.

Because the TPP is non-discriminatory and does not provide special
mechanisms for economies at different stages of development, the most
obvious challenge to China’s entry is the fact that its current state of
affairs widely diverges from the requirements of TPP.

No matter how successful the Shanghai free trade zone, it would not bring China up to the mark for TPP entry.

For one, the Shanghai zone is small and still experimental. Second,
the zone covers only certain elements in the TPP, namely creating a
level playing field for foreign and domestic entities. It does not
explicitly address TPP issues such as environmental protection or labor
unions. Sectors such as telecommunications remain unopened to foreign
competition.

That said, we doubt the conditions of entry are as rigid as they seem.

Vietnam stands out among existing negotiating members because it
looks able to enter the TPP even with its limited economic freedoms.
Despite the existence of an export-oriented private sector, the
state-owned sector still exerts much influence on the economy, with
pre-tax profit from state-owned entities accounting for 43.3 percent of
the total in 2011.

The ultimate challenge rests with geopolitics. It is possible that
Vietnam won a negotiating seat primarily due to its diplomatic ties with
the US. Most of the Asian-Pacific members of the TPP have treaties or
cooperation commitments in the military or security spheres with the US,
this could be an unspoken criteria for gaining entry.

While it is impossible to meet all the stringent requirements of the
TPP in the short term, China can effectively demonstrate its willingness
to realign its policies and show some sincerity in cooperating on
international issues.

These gestures could have important implications for China’s
potential entry into the TPP. Given the numerous sticking points in TPP
negotiations, China can bide its time in implementing reforms at home.

China has reached a critical juncture whereby structural reforms are
needed to promote its sustainable growth, and the TPP just happens to be
a powerful external push factor.