What will remind you of Sichuan, the cute panda, the mouthwatering Kung Pao Chicken, or the picturesque Jiuzhai Valley? All wrong! The answer here will make your jaw drop! 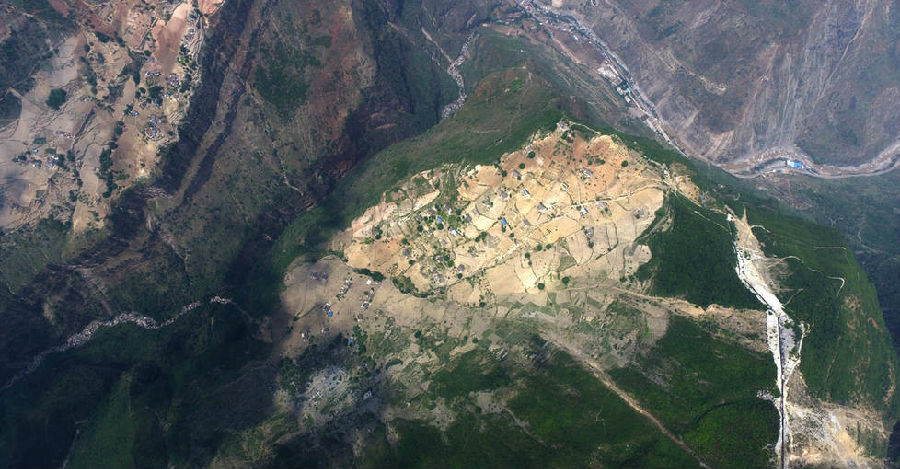 The village is called Atuleer, located in Zhi'ermo Township, Zhaojue County, Liangshan Yi Autonomous Prefecture, Sichuan Province. It is the little-known cliff village (悬崖村)! To get to school, the local children have to climb an 800-metre-high cliff! 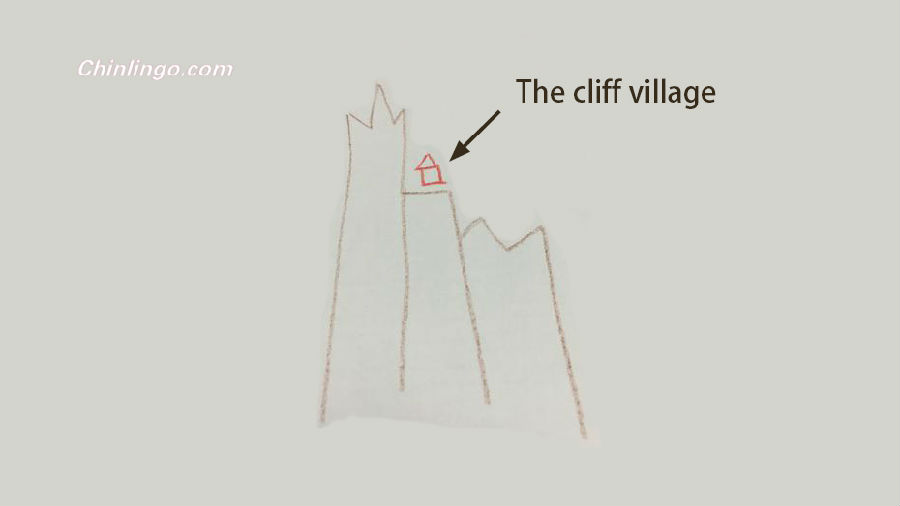 Its geological location is unique beyond words! Or, to understand this easily, just look at the sketch. 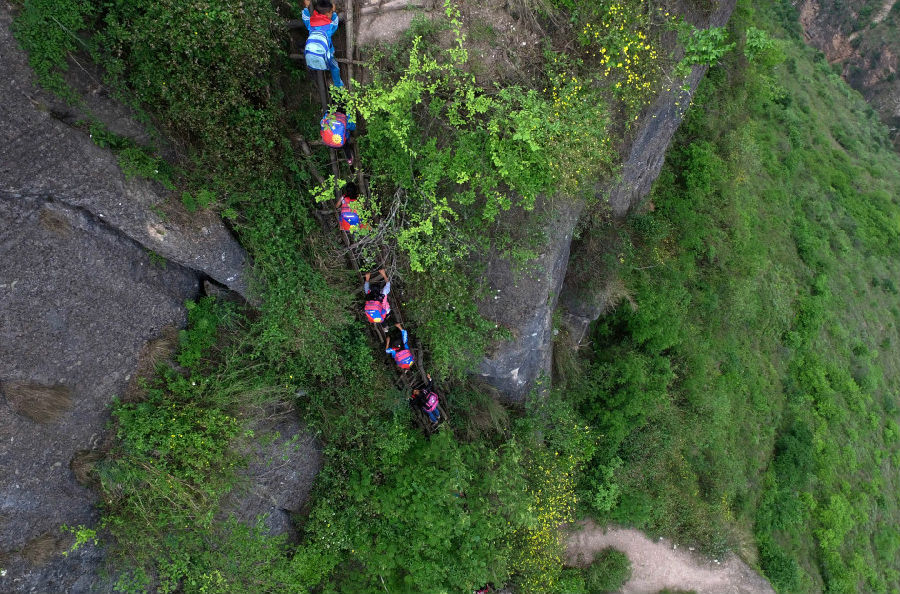 The village is located in the middle one of the three steps, boasting an altitude of over 1,400m. Along the cliff is a bamboo ladder consisting of 17 smaller ones. It takes the villagers 2 hours to scramble down the ladder, which is the only way out to the outside world. 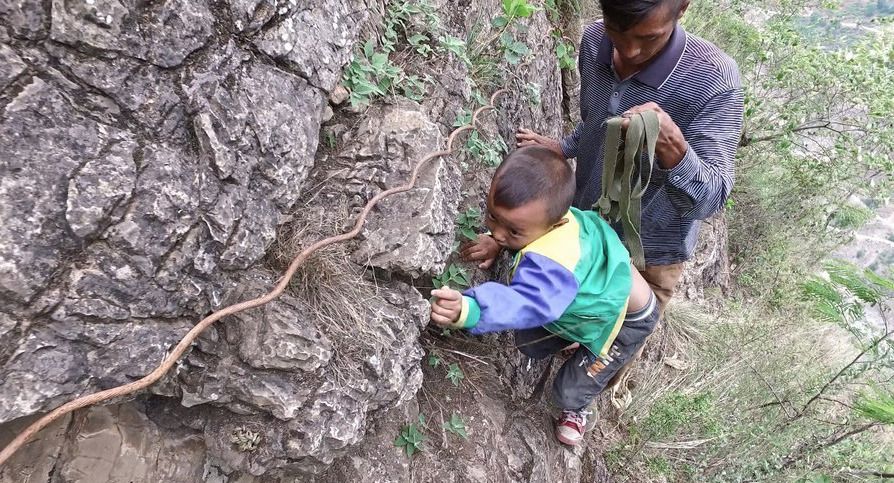 When a villager is seriously sick, he or she would be tied onto the back of a young guy to get down the cliff to see a doctor. Young children would be tied to the waist of their parents.

In such an adverse natural environment, aren't these students supposed to go to school in such ways? 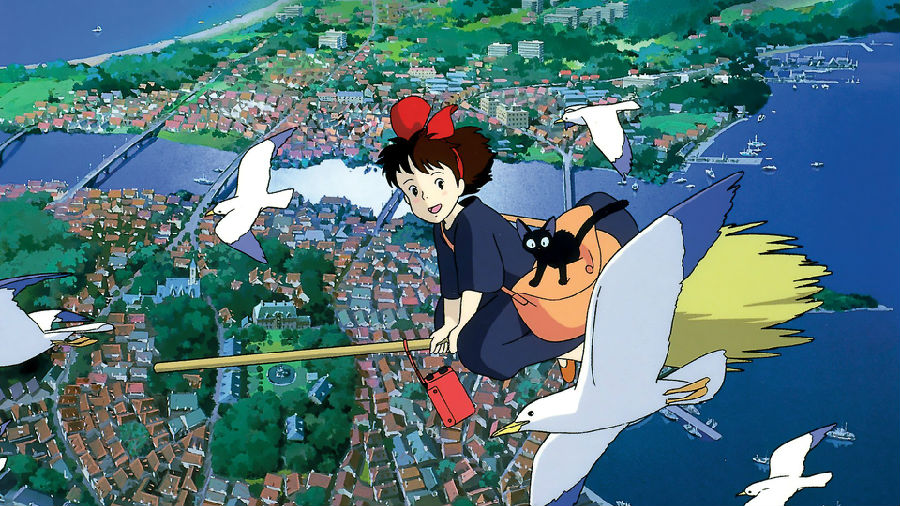 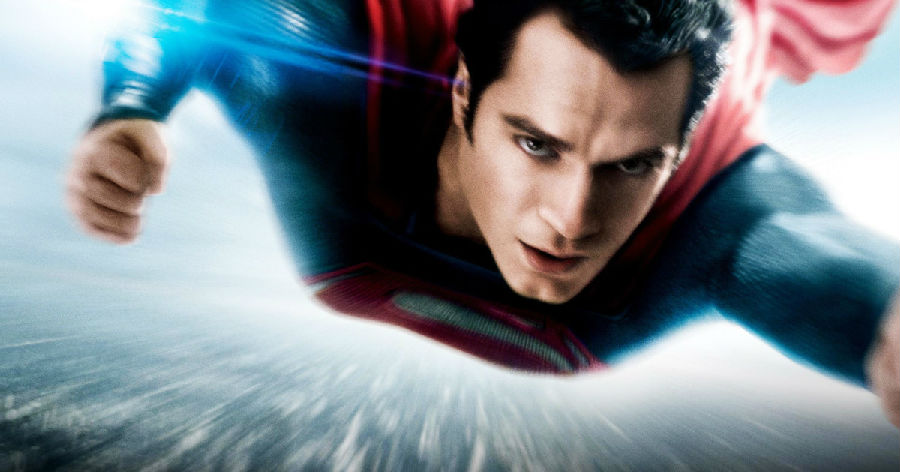 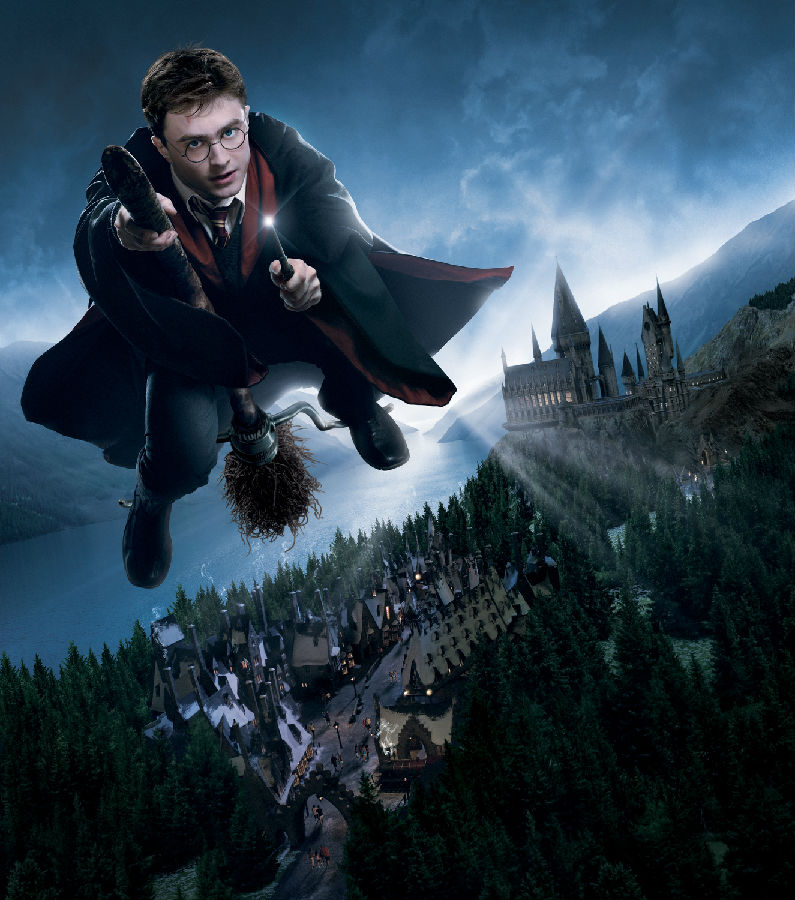 Sadly, a dozen of children come back home twice a month from the school at the foot of the mountain, by climbing!

Maybe we can comprehend their strenuous journey to school by learning about details of the character "爬" (pá). 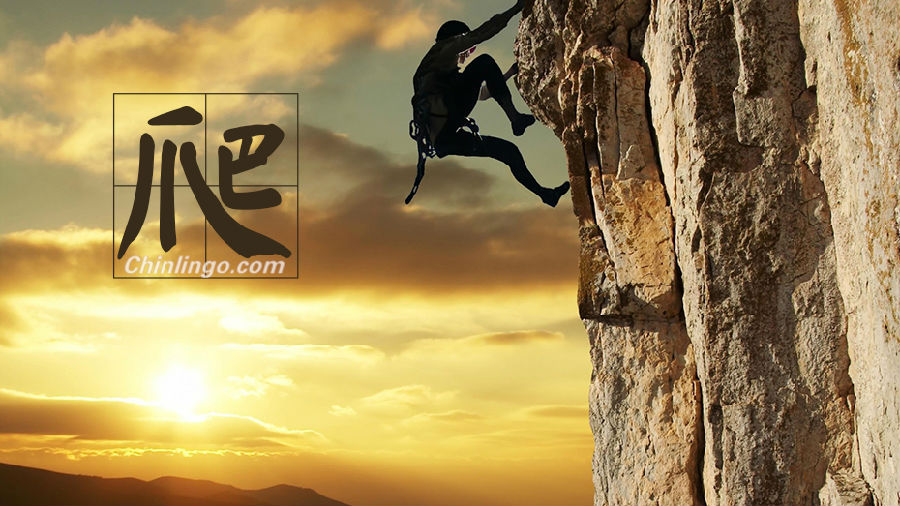 It's a pictophonetic character. On its left is "爪" (zhuǎ), which meant "claws of beasts" originally and has been evolved to mean "手" (shǒu, hands) of the human beings. Thus, "爬" indicates an action closely related to hands.

To move forward on hands and knees, with the body close to the ground: 爬行 (crawl); 爬洞 (crawl through a hole)

To go up towards the top: 爬树 (climb a tree); 爬山 (climb a mountain)

Sit up or stand up from a lying position: 跌倒了再爬起来 (get up where you fall down)

In modern life, "手" (shǒu) is no longer needed in such labor-consuming activities as "爬楼梯" (pá lóu tī, climb stairs), "爬坡" (pá pō, climb a slope) and "爬山" (pá shān, climb a mountain). The basic meaning of "爬" has been weakened. Hands are no longer needed to climb the stairs, as stairs are built in compliance with the body mechanics. Smooth concrete pavement roads are built to mountains, and even telphers are mounted to save the labor of feet.

However, "爬" is still used in Chinese language to make up compound words, and it has been evolved to emphasize primitiveness and difficulty of doing something.

Nevertheless, on the villagers' way to school, they still have to "爬" the bamboo ladder with hands and feet! The basic meaning of "爬" is perfectly explained by the cliff villagers. 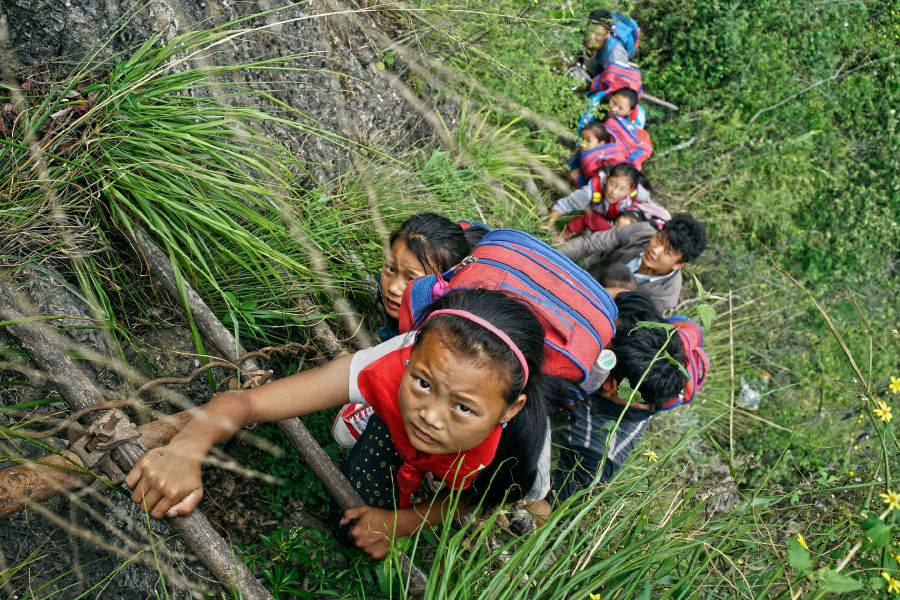 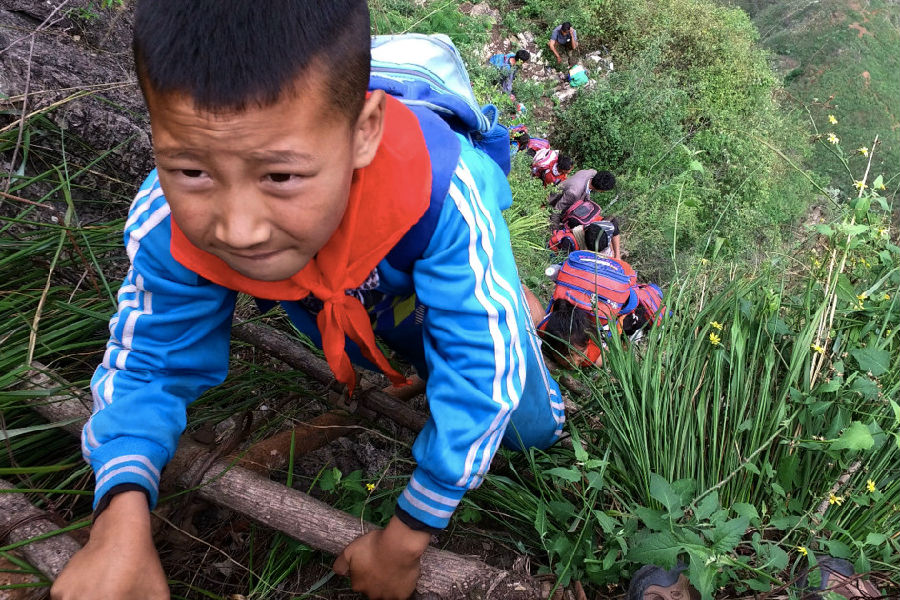 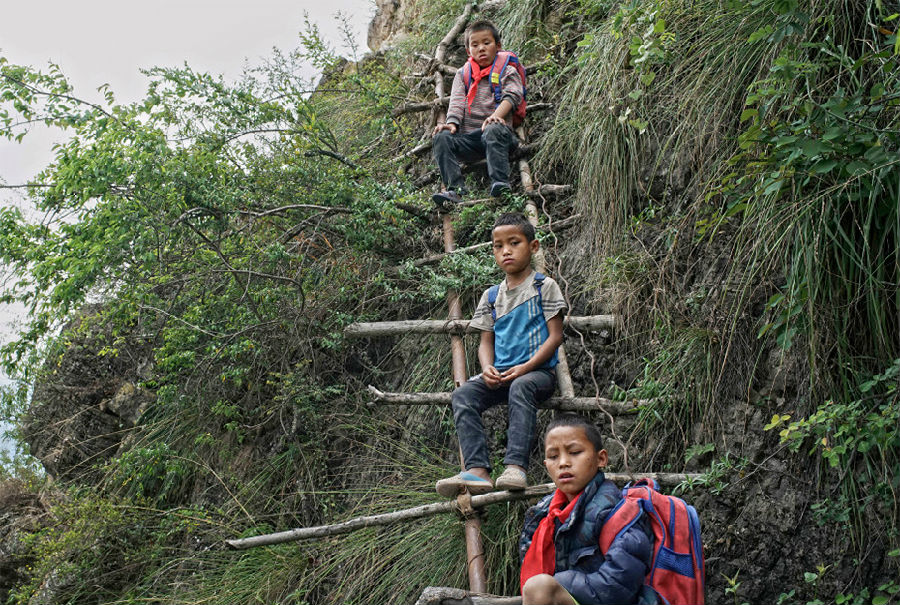 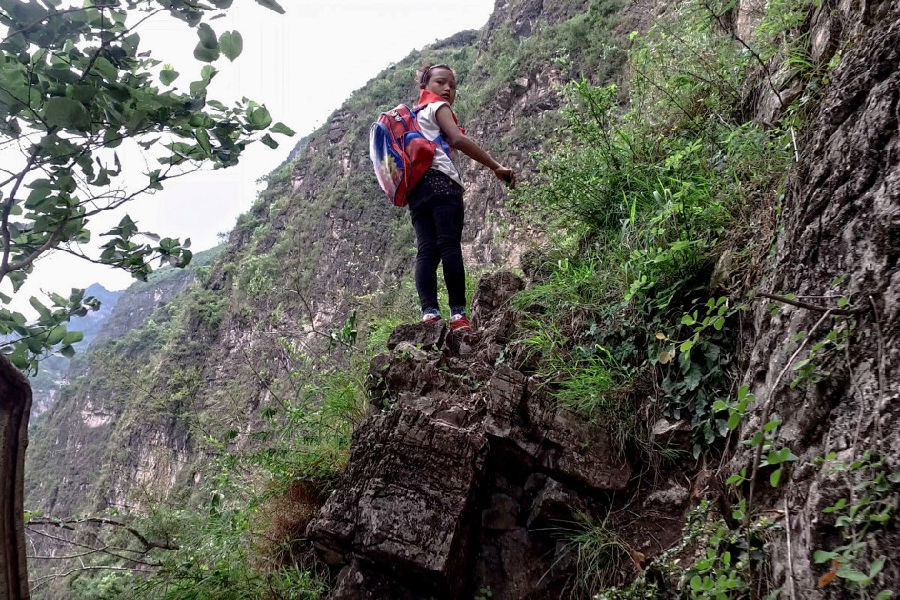 The cliff village has become well known recently, as several adults plunged to death from the ladder. Their accidental deaths have finally exposed the "gate of hell" to the media.

Before the accidents, hadn't the local villagers valued their lives in a priority? Hadn't they thought of making changes? Why not relocate, build a school on the mountaintop, or build a road. There must be difficulties beyond our imagination.

In the age of information explosion nowadays, the children in the cliff village are suddenly exposed in the spotlight of the Internet and make headline news, but they will also be replaced by never-ending hot news rapidly, and soon get forgotten.

How long do they still have to climb the cliff before walking upright to school easily, as the modern people do?

0 responses on "Climb to school"