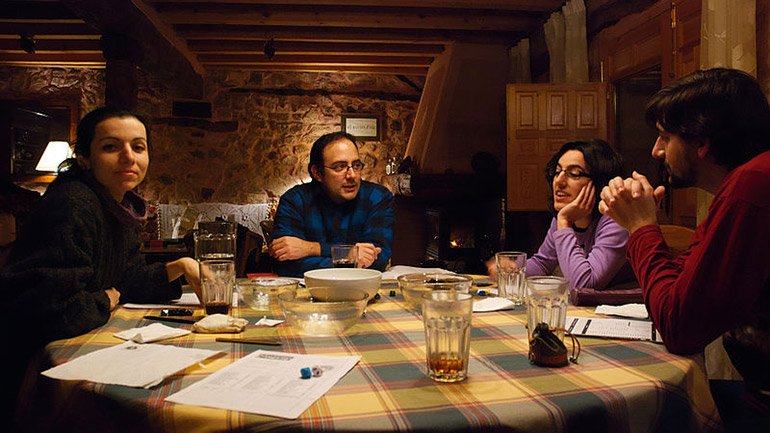 Role-playing is a word which is used quite often in textbooks and education literature. In this article we will discuss how you can use role-playing games to expand language competence, both as a learner and as a teacher.

Role-playing isn't the same as dialogue

Sometimes, authors and teachers seem to think that students reading the part of roles in a dialogue makes it role-playing, but acting out a dialogue and role-playing are definitely two different things. The former contains no creativity and is scripted, the latter requires creativity and is mostly improvised. Role-playing is about pretending that you are someone else or somewhere else and then acting as if that were the case. Let's look at these two situations:

This is the most obvious use of role-playing in language learning. Instead of being in the classroom, you pretend that you are somewhere else. You are then faced with a situation where you are required to interact with people using Chinese. The other party might be a native speaker friend, your teacher or a language exchange partner.

For instance, pretend that…

…you're inspecting an apartment you're might want to rent

…you want to complain about strands of hair in your soup

…you want to excuse yourself for being late

…you want to ask the way to the bank

…you are wrongly accused of stealing someone's cell phone

The reason you want to do this with a native speaker is that all these situations contain lots of cultural aspects. Even if you can translate what you would have said in your native language, it doesn't necessarily have the same implications in Chinese.

Creating new situations to practice Chinese is useful because it allows you to prepare for situations you're not likely to come across very often.

Sure, some situations might arise more often than others, but being able to design specific situations to practice language is awesome. It's also much more fun than most other ways of practising the same things.

Now you might think that this is actually done in lots of classrooms and you'd be right. However, the next step is to actually consider these situations more carefully and make the situation less scripted. For instance, when you try to rent an apartment, ask your partner to write down a few things about the landlord, such as what his minimum rent actually is, what kind of personality he has, what he thinks about foreigners like you, etc.Of course, you as a learner don't know these parameters.

Try negotiating the rent with a stingy landlord, try to get him to accept that your girlfriend will probably stay in your room on weekends. Do you have a dog? Do you have a passion for playing the violin? And so on. Use different landlords, use different situations. We're now approaching "real" role-playing.

The next step is to change who you are. This typically requires more advanced language skills, but is very useful if you can do it. For instance, if you're practising words related to bargaining, don't just assume that you're the person doing the bargaining and set some parameters for the seller, do the same for yourself! This requires you to move out of your comfort zone, which is great for language learning.

The reason this is less useful and should perhaps be restricted to advanced learners is because, after all, you're not likely to say things in a situation which are completely alien to your way of being. If you don't own a house, you're unlikely to find yourself in a situation where you're trying to get as much money as you can from the stupid foreigner who wants to rent a room.

Before playing, the participants decide on a setting and characters that are going to appear in that setting. Role-playing is about creating an interesting story in this setting and act as if you were a character in that story.

This can be employed for language learning as well, although this might be better kept outside the classroom simply because it takes a lot of time and works best in a one-on-one situation. Depending on your language level, you can invent different situations and characters. For intermediate learners, inventing realistic situations that are only slightly different from what you might actually experience probably works best.

Advanced learners can try anything. Don't forget to make the story interesting. Why not include a conspiracy, a love drama or whatever else you find interesting when reading books or watching films? Actually wanting to know how the story ends is a powerful motivation for playing and learning.

Of course, this is just yet another way of merging playing and learning, an essential component in successful language learning. In this way, you can practice language which is really useful, but that you're unlikely to come across very often. If you feel that's too complicated, then stick to situations you're actually likely to encounter and practice those. If it doesn't go well the first time, try again! You can't load a saved game in real life, but you can play the same scene twice in a role-playing game!

0 responses on "Expand your Chinese competence by role playing"