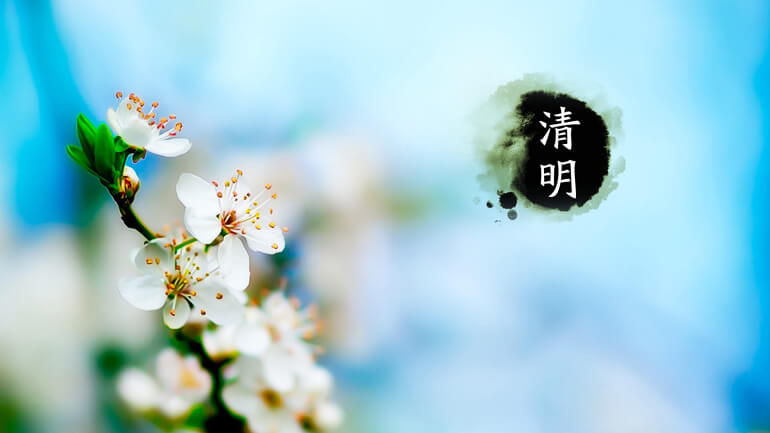 The words "clear" and "bright" describe the weather during this period. Temperatures begin to rise and rainfall increases, making it a crucial time for plowing and sowing in the spring.

Here are 8 things you may not know about Qingming Festival.

Qingming Festival is a period in which Chinese people honor nature and the ancestors of the Chinese nation. The worship of nature and ancestors can be traced to ancient times, and still matters a lot in modern society.

Cleaning the tombs and paying respect to the dead with offerings are the two important practices to remember late relatives. Weeds around the tomb are cleared away and fresh soil is added to show care for the dead.

The dead person's favorite food, wine and chopsticks are offered on their tombs, along with paper money. These sacrifices are all burned in the hope that the deceased will not lack food and money in the afterlife.

Legend has it that Qingming Festival is one of three periods during the year in which ghosts come closest to the world of living men. Buddhists believe that willow branches will drive away unwelcome ghosts and evil spirits. Therefore, willow branches are also known as "ghost terror wood."

Not only is it a period for commemorating the dead, it is also time for people to go out and enjoy nature.

As trees turn green, flowers blossom, and the sun shines brightly, everything returns to life. It is a fine time to appreciate the beauty of nature. This custom can be traced back to the Spring and Autumn Period (770 – 476BC) and Warring States Period (475 – 221BC).

Strolling outside in spring adds joy to life and promotes a healthy body and mind.

Flying kites is an activity favored by many Chinese during Tomb-Sweeping Day. Kites are not only flown during the day time but also in the evening. Little lanterns are tied to the kite or to the kitestring. And when the kites are flying in the sky, the lanterns look like twinkling stars at night. What makes flying kites during this day special is that people cut the string while the kite is in the sky to let it fly free. It is said this brings good luck and that diseases can be chased away by doing this.

The Cold Food Festival or Hanshi Festival is a traditional Chinese holiday celebrated for one day before Tomb-Sweeping Day. On that day, making fire is taboo and only cold food is available.

Legend has it that Prince Chong'er of the state of Jin during the Spring and Autumn period, endured many hardships while he was exiled from his home state. Once, in order to help the prince who was tormented by hunger, Jie Zhitui cut off the flesh from his thigh and offered it to the prince for sustenance.

When Chong'er became Duke Wen of Jin, he was generous in rewarding those who had helped him in his time of need, he long passed over Jie, who had moved into the forest with his mother. Duke Wen went to the forest but could not find them. Duke Wen then ordered his men to set fire to the forest in order to force Jie out. When Jie and his mother were killed instead, the duke was overcome with remorse and ordered three days without fire to honor Jie's memory.

Cuju is an interesting game played during this period. Ju is a ball made of leather with hairs plugged in it. Legend has it that the Yellow Emperor first invented it for training warriors. Later, Cu Ju was used by people to build up their bodies when they were unable to eat hot food during the Cold Food Festival.

In many parts of China, eating eggs during Tomb-Sweeping Day is as important as eating moon cakes at Mid-Autumn Festival. The Chinese folk belief is that eating an egg on Tomb-Sweeping Day will bring good health all year. In China, this custom has lasted for thousands of years.

The origin of eating eggs dates back to "Shangsi Jie". In ancient times, women who want to have babies after marriage often colored boiled eggs with different colors and put them into the river, and people living in the lower reaches of the river picked the eggs up and ate them. It was said that the more eggs were eaten, the greater the chance the woman will get pregnant. Today, people believe that eating eggs on Tomb-Sweeping Day will bring success.

In the lower reaches of the Yangtze River region, qingtuan or green cake is very popular snack on Tomb-Sweeping Day. Qingtuan is a kind of round green cake. In order to make the cakes, people mash barnyard grass to squeeze juice from it and mix the flour and juice to a paste. Then they inject black bean filling into the paste and steam them. Pretty and delicate, Qingtuan have a mellow taste and special flavor. Qingtuan are also sacrificed to ancestors on Tomb-Sweeping Day.

0 responses on "8 Chinese phrases to know about Qingming Festival"