Are you a ‘fangirl’? 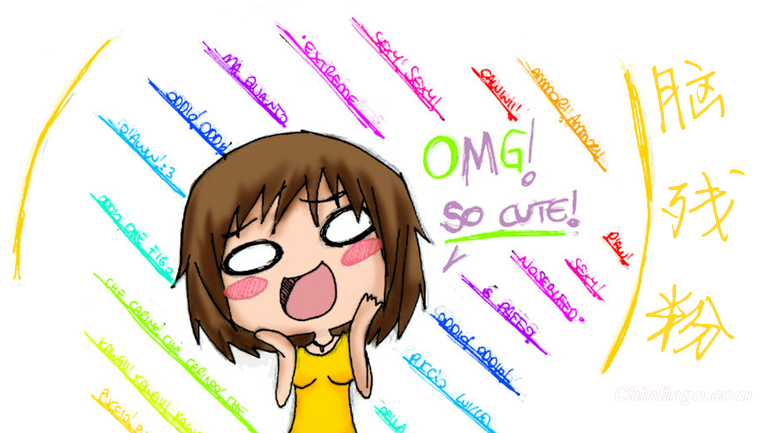 "脑残粉 (nǎo cán fěn, fangirl)" is a term used to describe extreme excitement over a certain fandom. For example, if you were a Hunger Games fan, and a new trailer came out, you might start fangirling, or freaking out from extreme excitement. "花痴" refers to a rabid breed of human female who is obesessed with either a fictional character or an actor.

Below are the 14 levels of being a fangirl. What's your level?

This show is pretty good. You're definitely going to see the sequel to that movie. The actors and actresses are talented, attractive individuals.

Actually, this show is excellent. Is there fanfiction? You won't leave the cast photo as your screensaver for that long. You needed a new one anyway.

Yes, you've watched the trailer ten times just to make sure you caught all the subtext. And maybe occasionally paused on close-ups of the leads' faces — just to see what their facial expressions said about the plot. But you're not going to tell anyone about it.

You just need a T-shirt with that one quote on it. And maybe a sticker of your favorite character. And an exact replica of that ring they found in that one episode.

The next movie in the series came out, and you read that the actors are trying not to laugh at an inside joke in the last scene. And when the lead actress pointed in the first scene what did she really mean? Maybe you should talk about something else.

You know your friends are sick of hearing about your fandom. You know you should talk about something else, but the feels are too overwhelming. You have to share them with someone. Anyone.

The story is just so perfect: the lines, and the way the characters say the lines with their mouths and their voices. How is anyone talking about anything else?!

You realize you've been a bit obsessive and you feel it's time to apologize to your non-fandom friends for trying to drag them into it.

You discover message boards and fanblogs. There is a whole slew of people just like you.

After watching that one scene for the hundredth time, the line repeated two seasons later totally makes sense! Did anyone else catch how the lead said "hey" to his lady friend? They are so in love. Everything makes sense.

This is a level many will skip, as fandoms are supposed to support the community. But if someone doesn't know the name of the restaurant in episode 203? Judging you.

EVERYTHING IS FANDOM AND EVERYTHING HURTS AND CAPLOCKS ARE THE ONLY WAY TO PROPERLY EXPRESS ALL YOUR EMOTIONS.

Your fandom is the best fandom. Your characters are the best characters. You are not interested in hearing from anyone who disagrees.

Completely obsessing over a piece of pop culture can be tiresome, and sometimes you just need a break. Unfortunately that's not going to happen, because there are GIFs to be made and fan art to be drawn.

Whatever you're level may be, it's OK. People offline might not understand your devotion, but the internet understands.