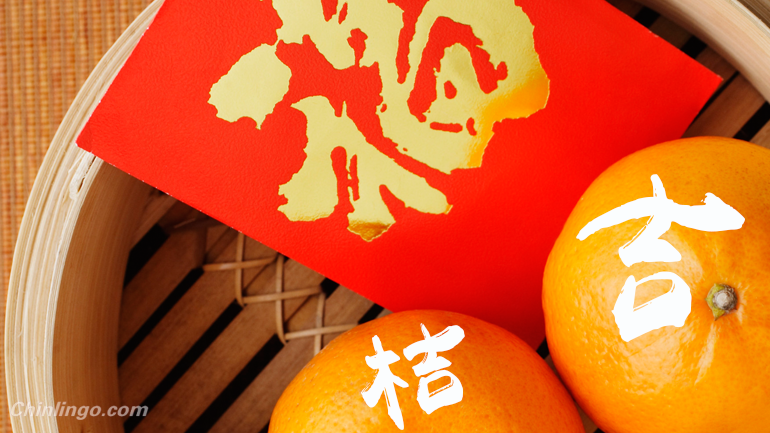 Chinese New Year, known in China as Spring Festival, has an abundance of unique traditions associated with it. Some of these traditions are more widespread than others. Among the many New Year's customs are a few whose meaning is derived from puns of Mandarin words. Here is list of 8 homophonic puns in Chinese spring festival :

This is first in list of homophonic puns in Chinese. In China, people in the north used to eat 饺子 (jiǎo zi, dumpling) at midnight on the last day of the Lunar Year. Eating 饺子 (jiǎo zi) is a family activity which has the meaning of good luck, happiness and fortune.

The pronunciation of 饺子 is the similar to that of 交子, 交 means "meet, at". 子 means 子时, the first of the 12 two-hour periods. It starts at 23:00 and ends at 01:00. In the traditional time system, one day is divided into 12 equal parts, each of which lasts two hours. They are named after the 12 Earthly branches (地支). The first starts at 23:00 of 24-hour system used today. It is the beginning of one new day. So 交子 means that the new year replaces the old one at the beginning of the first hour (when the time meets the first hour).

Besides, 交 and 子 together is just right a word 交子. It is a kind of currency used in the Song dynas`ty and therefore it means money. And the shape of 饺子 (jiǎo zi) looks like old Chinese gold or bronze made coin, therefore, 饺子 symbolizes richness and abundance.

年糕 (Nián gāo) and 年高 (Nián gāo) from 年年高升 nián nián gāoshēng or "raised higher each year" leading to the belief that those who eat niangao should have greater prosperity with each coming year.

汤圆 (tāng yuán) – At times of reunion, such as Spring Festival, it is customary to eat sweet round dumplings called tangyuan (汤圆). The tangyuan are traditionally eaten during Lantern Festival, which is the last day of the Chinese New Year celebration.

The roundness of the tangyuan and the bowls they are eaten out of emphasize unity in addition to the similarity of their name with the Mandarin word for reunion, "团圆" (tuányuán). So they eat "tangyuan" during get together with classmates and family. Also, as students were quick to point out, "Tangyuan are round and money is round so it means more money".

Shengcai – Traditionally the first meal of the New Year is vegetarian with a variety of ingredients. The meal is served with lettuce (生菜, shēngcài) because the word is near homophonous to "生财" (shēng cái), "to make money". Lettuce shows up in other New Years customs as well. In the traditional New Year's Day lion dance lettuce and red envelopes of cash are offered to the lion.

Fa cai (发菜), a thin black hair-like algae, is a feature of Spring Festival cuisine because its name is a near-homophone of "发财" (fā cái), meaning "prosperity".

So the Chinese like to give and eat tangerines as a way of bringing good luck and money. 大吉大利 (Dà jí dà lì) means "big luck big profit," so the bigger the tangerine the bigger the luck.

Naturally, in new year people are forbidden to mention anything with bad meanings. For example when someone break some glasses or dishes on the floor (which is regarded as a bad thing in new year), we will have to quickly say something nice to accompany it, such as 岁岁平安(suì suì píng'ān; means harmony and safely year around). It is because in Chinese 碎 "to break" has the similar pronunciation as 岁 (suì) "year". So if something unfortunately happens to break, just say 岁岁平安 at once.