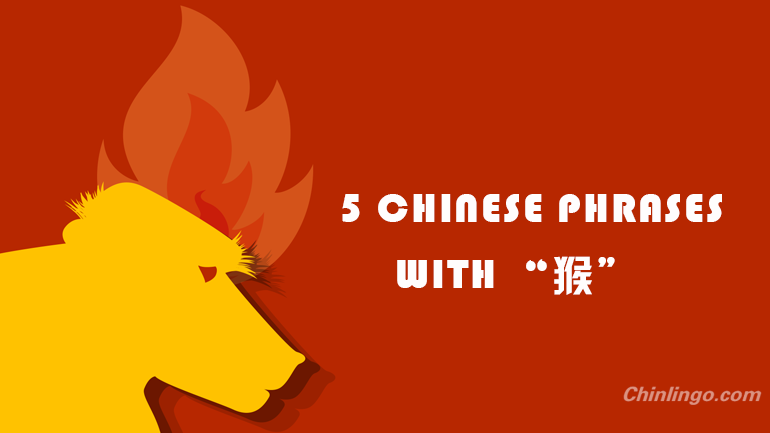 According to the Chinese zodiac, the Monkey (猴, hóu) is the ninth of the 12-year cycle animals. 2016 is the Year of the Monkey (猴年, hóu nián) starting from February 8, 2016, which is the Lunar Chinese New Year or Chinese Spring Festival.

The Monkey, Hóu (猴), plays a part in many Chinese tales and idioms. Now let's learn some idioms and phrases related to it!

This is a well- known idiom, which literally means "kill the chicken to scare the monkey," and it indicates "punish an individual as an example to others", or perhaps more simply; a warning to others.

Firing this sort of employee is a warning to others.

It is another phrase used in Chinese. It translates as "when the tree falls, the monkeys scatter". This means when the chief falls from fortune or power, his followers disperse all at once. Its English equivalent might be "rats desert a sinking ship".

That is why bringing people together so difficult, but letting everybody gone so easy.

Note that the character for monkey (猴) is replaced by 猢狲 (húsūn) which can also be used to mean monkey.

This can also be expressed as 水中捞月(shuǐ zhōng lāo yuè) or fish for the moon in the water. A folklore tale goes that a kingdom of monkeys, seeing the refection of the moon in a lake, thought it had fallen in. They formed a monkey chain to fish it out, only to find that the moon was still in the evening sky. This idiom means "useless attempt".

Careful that we do not make this mistake, the monkey catching the moon in the water.

This phase is translated as "when the tigers are not in the mountains, the monkey becomes king". Its English equivalent might be "when the cat's away, the mice play".

The boss is away from the office, so he (another colleague) could play around in the office. When the tigers are not in the mountains, the monkey becomes king.

This idiom means there is no specific date or deadline for an on-going matter. It also indicates that something is unlikely to be accomplished.

If people say they have to wait until the "monkey year horse month" to have something done, the implication is that a moment that will never come or a thing probably will not happen.You may hear some people complain that they get paid poorly:

My salary will not grow until the horse month of monkey year.

However, the funny thing is: as the year 2016 comes, this seemingly distant month is coming for real. Based on the Chinese lunar calendar, each animal in the zodiac not only represents one year, but also symbolizes a particular month in a year. For example, "rat" corresponds to 11th month in a lunar year, and "ox" refer to the 12th while the month of the tiger is the 1st month. Therefore, the month of the horse this year, which is the Year of the Monkey, falls on the solar calendar June 5 to July 3 in 2016.

The "Horse month of Monkey year" only appears once in 12 years. In good humor many Chinese people have said: "It feels like I can finally see the outcome of many things I've been waiting for."