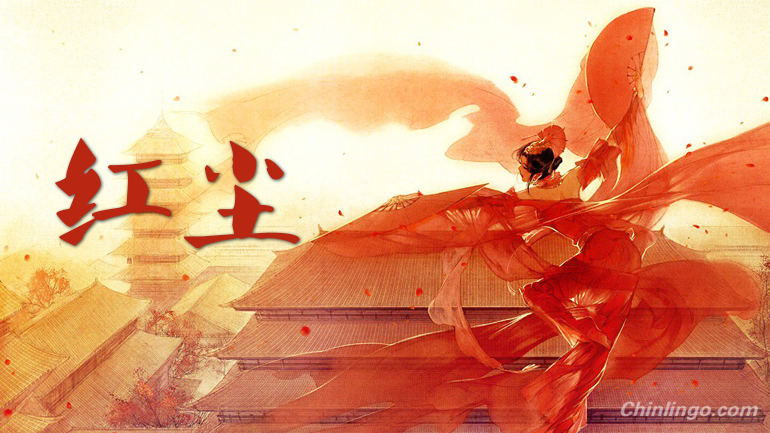 In ancient China, people used "红尘 (hóng chén)" to indicate a flourishing and bustling place. There is a line in Luoyang Dao (洛阳道) written by Xu Ling in the Southern Dynasty talking about a fascinated place:

The other meaning of "红尘 (hóng chén)" is human society which is often used as a term in Buddhism. In the Chapter 1 of The Story of the Stone (红楼梦) there is a saying:

This sentence means "this was a once lifeless stone block which had been found unworthy to repair the sky, and it had been taken down by the Buddhist mahasattva Impervioso and the Taoist illuminate Mysterioso into the world of mortals". Here the word "红尘 (hóng chén)" means "the world of mortals". Nowadays, people usually use "红尘 (hóng chén)" to refer to the worldly affairs.

You might have heard someone say "看破红尘 (kàn pò hóng chén)", which implies he or she has seen through and understood thoroughly the worldly affairs. In the old days, those people who felt themselves living in a hideous human society or with a hopeless future would get their hair shaved and become a monk or nun to shun away from reality. Currently, there are still some people who give up on themselves, just because they get hurt emotionally or encounter adversity in careers. Simply, you can regard "看破红尘 (kàn pò hóng chén)" as the implication that "one wants nothing".