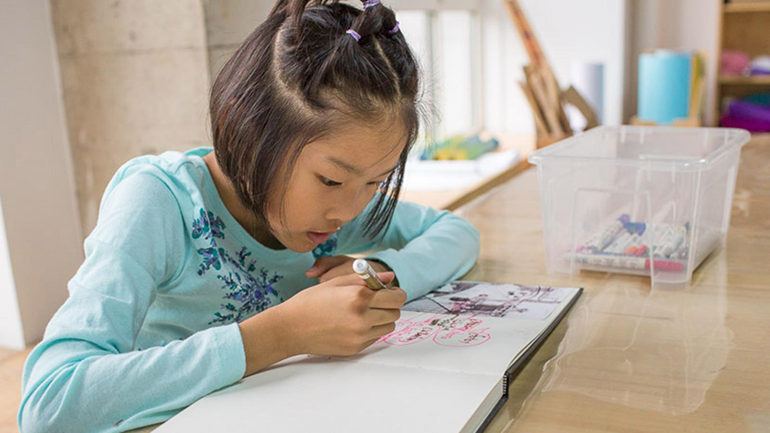 Beijing schoolgirl, Angelina, aged 11, speaks perfect English and Chinese. She plays lacrosse and football and spends her summers at camps in America.

Angelina's parents opted for an all-private education over the Chinese state education system because they were worried about "the pressure-cooker effect."

"I chose to put my two daughters in a [Chinese] private school because in public schools there is not enough communication between the teachers and the students. And it's too stressful," said Amy Lin, a Taiwanese mother who moved to China six years ago with her husband. "I would like to send her to America later to study. There are better universities and job opportunities there," Lin added.

The Lin family is one of many affluent Chinese families turning their backs on traditional Chinese education. A growing number want more from their child's school, an alternative, more Western approach which they believe will help their kids develop their creativity. And they're willing to pay.

Asia-focused brokerage and investment firm, CLSA, estimates the private education market in China is now worth more than rq yuan ($315m). The broker also expects enrolment in international schools, which are all private, to grow 14% annually through 2018.

The private sector is flourishing: A wide variety of classroom options are available for parents able to pay, from private classes once a week to full-time boarding-school education. Some schools cater for three-year-old kindergarteners all the way through to 18-year-olds, many offering after-school activities and tutoring in English, art or music.

Research published by McKinsey in January 2015 reveals there are now more private kindergartens in China than public ones and at the secondary level, the percentage of private schools in China has risen to 10% from 3% less than a decade ago.

Where pressure starts in kindergarten

Every year, more than nine million students in China sit the same terrifying exam that will determine which university they can attend and ultimately their job and future social status. The state system remains geared almost entirely towards this high pressure end of high-school exam, called the "gaokao".

Hot-housing starts at a very young age, with many parents scrambling to enrol their children at the best kindergartens. This in turn leads to access to the better elementary and middle schools and then to one of the top-performing high schools, which are allocated the best teachers and resources.

"The education system today ignores personality development, values, and social responsibilities. This is [the] cause of great problems for our country," said Yang Dongping, an education expert at the Beijing Institute of Technology and the dean of the 21st Century Education Research Institute. "It's very difficult to move mindsets from an exam-orientated education, to one where personality is also accounted for," Yang said.

In response, private classes are springing up across China, not just in the urban hubs, to fill a widening gap between the new middle class' expectations of a good education and what Chinese public schools can offer.