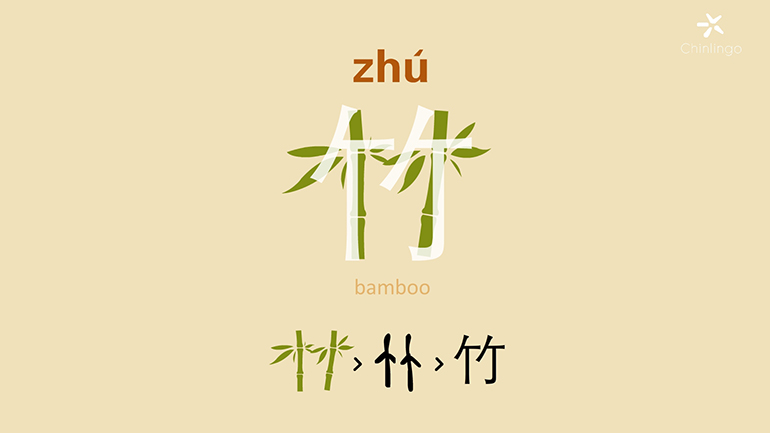 Before paper and pens were invented, ancient Chinese people carved characters with a knife on "竹" (zhú, bamboo) to create a book.

In Oracle Bone Script, "竹" is shaped like two bamboo trees side by side, with two leaves on their trunks respectively. Over time, these leaves went up gradually. As a result, the original leaves on the left have evolved into the stroke "丿", while the leaves on the right have become a short horizontal stroke "一" at the top. That's how the modern character "竹" evolves.

"竹" is also used as a radical called "竹字头" (zhú zì tòu). As showed by itself, "头" here indicates that the radical is usually put at the top of an up-down structured character. Moreover, to get the radical "", the character "竹" should be changed slightly, by shortening its vertical strokes "丨" into "丶". For example, in the up-down structured character "竿", the upper part is an abbreviated form of "竹", while the lower part "干" indicates its pronunciation.

A bamboo tree is green throughout the year, which shows its vitality. Its branches and leaves droop but do not bend, flexible but rigid; the bamboo joints grow upwards one after another, leaving people with a positive image. Moreover, as the carrier of words and history, "竹" has inherited the culture. Thus, it is esteemed by scholars in China, who always plant bamboo trees in their courtyards to show their aspirations. Landscape painters love drawing bamboos to express their mind.